Brooklyn-based literary magazine n+1 has a small new book out this month that chronicles 13 smart women talking about literature.

The slim No Regrets is a set of three transcribed roundtable discussions with 12 participants (all writers, editors, activists, artists, and academics) and moderator Dayna Tortorici about what the women recall from their lives and reading lists in their early twenties.

The book is a follow-up on an n+1 book of advice on one’s early twenties called What We Should Have Known, which came out in 2007 and mostly consisted of men. Tortorici explains in the introduction to No Regrets why the new collection took a decidedly different tack: “The word should has a special place in the lives of women, as it’s been a tool of their subjection through social strictures (“women should be X”) and their emancipation through feminism (“women should reject the authority of anyone who says they should be X, or Y, or Z, or anything else”). Should, in other words, gives us both The Rules and the injunction to break them.”

Since the participants are drawn from women who are involved with n+1, the conversations sometimes feel like they revolve around a small, elite world—the 12 participants are mostly white, mostly East Coasters, and are mostly heady academic thinkers. But the discussions are worthwhile for people who think deeply about literature and their lives and the conversational format of the book is engaging—I started reading it during breakfast and wound up sitting and reading the whole thing.

n+1 is letting us publish this excerpt from No Regrets below. In this section, Dayna Totorici, riot grrrl documentarian Sara Marcus, essayist Kristin Dombek, poet and activist Dawn Lundy Martin, and writer Sarah Resnick talk about trying to read the male-focused literature assigned in school.

EXCERPT FROM NO REGRETS:

I can give an example. When I was a teenager, I read with a sort of perverse determination to cure myself of two things. One was being from Los Angeles, and two was being a woman, because I didn’t want to be either of those things. If I could pass as this other kind of person, I thought, I could go to college on the East Coast, and be a kind of, oh, I don’t know …

DAYNA TORTORICI: A man, yes. So I read things that were very “boy canon.” I don’t remember how exactly I knew to read them, there was definitely no one telling me to, at least not until later in high school. Though at some point Amazon started publishing these lists like, “So You’d Like to … Read the Greatest Books of All Time?” and I would consult those.

I read a lot of stuff, not only over my head—like Anatomy of Criticism when I was 17, or Hopscotch when I was 15—but stuff that was pretty directly aggres- sive toward me as a reader. I will never forget reading Bukowski’s Post Office and feeling so horrible, the way that the narrator describes the thickness of ugly wom- en’s legs. I think it was the first time I felt like a book that I was trying to identify with rejected me. Though I did absorb it, and of course it made me hate my body or whatever.

I felt these were the books I should be reading, because they would make me more like a boy and also more like an East Coast intellectual. Not all of them were bad. Most were very good!

SARA MARCUS: I remember putting On the Road down the first time a woman was mentioned. I was just like: “Fuck. You.” I was probably 15 or 16. And over the com- ing years I realized that it was this canonical work, so I tried to return to it, but every time I was just like, “Fuck you.”

SARA MARCUS: I read Marilyn French’s The Women’s Room the summer I was 14, and it was like getting a measles shot or something—from then on, if there was something that was trying to make me feel bad about myself, I would put it way over there. And I don’t regret that. I think that it’s fine, when you’re young, to just take in things that make you feel like you can do shit, and leave the rest for later. For instance, I didn’t read Port- noy’s Complaint until after college. And I really liked it! But I don’t regret not reading it earlier.

I’ve still never finished On the Road, though.

DAYNA TORTORICI: Have you guys finished On the Road?

DAYNA TORTORICI: All three of you have finished On the Road.

KRISTIN DOMBEK: Yeah, and I loved it at the time. It’s funny, I know I was doing that a lot, reading to be a man or like a man, to get into this world, but then there were books that I couldn’t read. For some reason I couldn’t read Hemingway. I would get so angry. I just couldn’t read him. And years later, I read Hemingway and wished I could have read him earlier. Because I might have learned to write fucking short sentences, which would’ve been really good.

SARAH RESNICK: I pretty much had a parallel experience of being able to read Kerouac but not Hemingway. I don’t really know why. I was influenced by my older brother, and would read things he read—though he also really liked Hemingway, so that’s not the reason.

I found Kerouac really exciting at that time. I was 14 or 15 when I read On the Road, and it was my first experience with a kind of break from conventions of “good writing.” I’m not sure that I was so attuned yet to some of the criticisms that Sara suggested, of the female characters.

DAWN LUNDY MARTIN: I didn’t have trouble reading mas- culinist texts like Hemingway. I kind of thought I was a boy anyway, for a long time, so I was just identifying. The parallel moment for me was reading texts that had prob- lematic moments around race, and being in a class—I went to school with all white kids—reading Faulkner, or Twain … and there were racialized moments that were really unconsidered, and a kind of discomfort around those moments. I felt real resistance, even to something like To Kill a Mockingbird. I wanted it to get considered in a different way. But I also felt like it couldn’t just be me having this moment, around them, of feeling just hot. I didn’t even know what the feeling was. Embarrassment? Shame?

And then kind of by happenstance, a friend’s mother—I had only read maybe one other book by a black writer by the time I was 17—a friend’s mother gave me The Color Purple. Which was fraught in all kinds of racial and gendered ways, but it felt like such a relief, that kind of honesty around these identities that were complicated in the other texts but that you couldn’t talk about.

KRISTIN DOMBEK: So you didn’t speak in class?

DAWN LUNDY MARTIN: No, it was impossible. I didn’t have the language for it in that context. No one was providing us with a language. The only language would have been a language of resistance. But I didn’t have the kind of analytical language with which to help others in the class, because, you know, the instructors weren’t doing it.

DAYNA TORTORICI: Did you feel like you should be reading those books anyway and enjoying them?

DAWN LUNDY MARTIN: Absolutely! I mean they’re great books, right? I kind of understood that there was a failure on the part of another person, but it felt like an internal failure as well. “Why can’t I enjoy these books in the way that they should be enjoyed?”

Read more infomation on No Regrets over at n+1.

this! this is awesome.

Does the book get into any deeper discussion as to WHY the participants didn't like these books, beyond "Because they were masculinist/racialist and made me feel bad about myself?" I don't even understand that line of reasoning. Why would you only want to read books written by people who think the same as you? There was really no content here beyond listing book titles and whether they did or didn't enjoy them, which was disappointing, as I am a feminist and book lover who would love to read feminist criticism that provides some actual analysis rather than feminist buzzwords and "Fuck you, Kerouac"'s.

I quite enjoy the sense of camaraderie created amidst these females’ real talk. Women certainly have been plagued with the shoulding syndrome ever since the patriarchy took foothold in society. Reading Kerouac was a bit of a filthy read for me as I have never seen any appeal in cars or sex with teenage girls. On the Road bored and disgusted me while simultaneously stimulating a sense of intrigue within me regarding the male species. Miller on the other hand, only bored me. I saw Bukowski as a self-loather with a penchant for gratuitous violence, likely wishing he were the physical recipient of his own sadistic creations. He may very well be; but I digress. I, too, was saved by feminist literature and my 11th grade English teacher, Mrs. Campbell, who literally and symbolically served as my entry point to Joseph Campbell and the world of sophisticated literary criticism. I independently studied Toni Morrison’s Beloved in her class and finally had female protagonists of colour with whom to relate. The most disenfranchised adults on our planet are Black women and any piece of post-colonial literature to explore the Black struggle has always resonated deeply with me. The strength and resilience weaving all feminist literature naturally uplifts and heals the soul so feeling we should be reading anything that does otherwise can end up being an unintentional manifestation of our own self-hatred. One love, y’all. 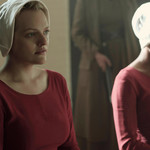 by Rachel Klein
The protagonists in “The Handmaid’s Tale” and “1984” were set on different paths from the moment they were born into societies that defined their freedoms through their respective gender identities.