Nonmonogamy and Fluid Sexuality on "House of Cards" | Bitch Media

Nonmonogamy and Fluid Sexuality on “House of Cards” 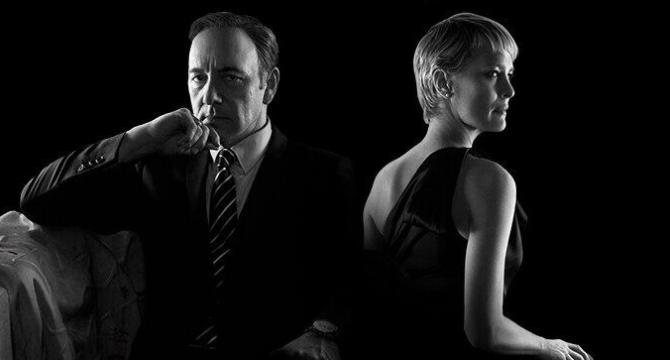 This article contains plot details from the first two seasons of the show.

House of Cards is a story of a ruthless quest for power and control. But it’s also a story about sexuality—in fact, the two things often seem to go hand-in-hand on the award-winning Netflix series.

Nearly every episode features sex scenes that are about much more than simple pleasure as people use, manipulate, and harm each other with sex as a blunt instrument, with the ruthless Frank and Claire Underwood (Kevin Spacey and Robin Wright) leading the charge. Since season three is on the horizon—for those who didn’t catch the preview when it was accidentally posted earlier this month—we’re likely to see much more of that.

Frank and Claire Underwood’s marriage often seems like a complicated business arrangement as well as a loving relationship, something that may feel alien to viewers. It’s undeniable that the couple love each other ferociously and would do anything for each other—their marriage that takes places within an “us against the world” framework. The intensity of their marriage reflects years of devoted and focused partnership that acknowledges the goals of both partners. And, as we know, woe betide either partner when they attempt to suppress the interests of the other.

But Claire and Frank also acknowledge that even in a loving relationship, it’s not always possible to be all things to a partner, which makes for one of the most unique marriages on television. Whether they simply have an open marriage, a poly relationship, or a nonmonogamous one isn’t clear. But what is obvious is that they’ve negotiated the terms of their marriage and their relationships with people outside their partnership. Claire and Frank aren’t cheating on each other when they sleep with their lovers—and this makes them stand out in a television landscape where nonmonogamous relationships are almost never depicted, and when they are, they’re usually accompanied by stigma and shaming.

Of course, that doesn’t mean Frank and Claire are beyond reproach. We’re supposed to find them both to be rather ruthless people, but it’s not because of their marriage—it’s because they’re power-hungry politicos.  Showrunner Beau Willimon described their relationship in a 2013 interview: “Its mystery is one of its strengths. I think it’s a mixture of… trust, mutual admiration, loyalty, respect, a deep understanding of each other, and shared desire to succeed at all costs.” Even cutthroat Congressmen can be open-minded lovers. 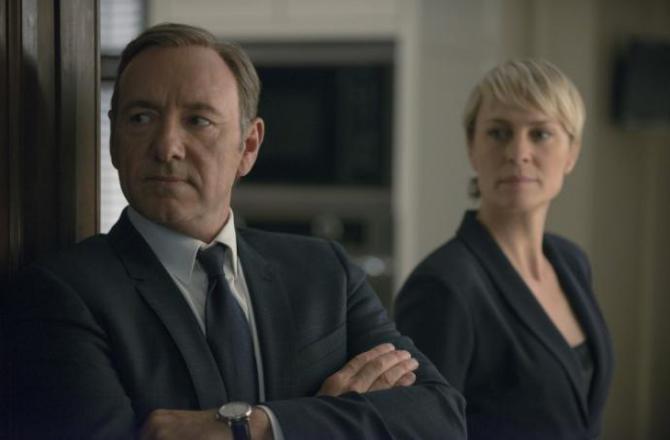 It’s not just the openness of Claire and Frank’s marriage that’s surprising, though. The way they interact with their partners is notable in the world of TV.

On Claire’s side, she has an extended relationship with her partner Adam, whom we are initially led to believe is someone she loves and deeply relates to. Things get more complicated, though, when she lies to him and we begin to wonder if she was using him as a tool all along. In some ways, Claire is even more determinedly manipulative than her husband—she’s very focused on her own goals at the cost of other people, including those she loves.

It’s notable that for some audiences, this might seem more shocking and perturbing coming from a woman—the idea that Claire would abuse a lover or discard him once he no longer served her needs seems upsetting. When Frank cuts out his friends and lovers, this is further evidence of his evil. When Claire does it, it seems to come with an added layer of loathsomeness for viewers that have a difficult time grasping the fact that women can be just as brutal as men.

Claire also frankly discusses her abortions, another remarkable move for television. More often than not, women who get pregnant on television are allowed to elide the issue by having miscarriages or deciding to keep their babies, with abortion being extremely rare (and portrayed as more dangerous than it is in real life). Her openness about the subject is reflective of the larger themes on the show, which unflinchingly take on political issues that television—and society—tends to shy away from. Her abortions aren’t presented in a light that’s meant to make her appear evil or sinister, but rather as a simple fact of her life; she didn’t want children, because they didn’t fit into who she wanted to be and how she wanted to live her life. The show doesn’t shame her for having abortions, but rather for the possibility of having lied about their specifics.

We also see Claire’s past as a rape survivor, an issue that’s also handled with a great deal of complexity, and is much more than a simple plot device. When General Dalton McGinnis leans over their table during one scene in season two and smugly talks about being an ex-boyfriend, the tension in the scene is clear. Frank slowly realizes who Dalton really is—but the way he reacts to the news is fascinating, showing the layers of nuance the show is capable of displaying. Writing at Think Progress, Alyssa Rosenberg discussed the scene and its aftermath, probing into how Claire relates to her rape. Like some survivors, she’s chosen to box up her past and put it away because that’s the only way she feels she can deal with it; she doesn’t want to revive those memories or seek an empty, hollow revenge that ultimately won’t be fulfilling. She tells Frank to rein himself in, refusing to take advantage of the easy and decisive revenge he offers her. Notably, of course, she finds her own way of hitting back at him by outing him as a rapist on national news.

Frank and Corbet, getting drunk and sentimental.

Frank’s sexual history is equally interesting. In one of the handful of emotionally vulnerable and tender scenes we see, he and college friend Tim Corbet make their way to the library of the Sentinel—a military college Frank does not have fond memories of—where they lie on the floor and talk about their past. Frank references their friendship and implied sexual relationship, admitting that Corbet meant a great deal to him and opening himself up to the man in a way we rarely see him doing with other characters on the show. Crushingly, Corbet dismisses their relationship as unimportant.

It’s unclear, though, whether the motivations behind that are driven by fear, a genuine disdain, or something more complicated. Perhaps Corbet does view their relationship as college exploration and little more, having moved on to other things. But maybe he’s afraid of being outed, or of the public scandal that might result if his relationship with Underwood is revealed—perhaps his casual cutting remark is designed to deflect Frank’s emotional attachment, to avoid attracting attention.

Frank, Edward, and Claire, sittin’ in a tree…

It’s unclear whether the scene is one of genuine affection, or simply turning to the nearest available tool—but I bet that will come up in the third season. At Business Insider, Kirsten Acuna notes that readers seem to be in the process of being led down the primrose path of believing that Frank’s downfall will be the murders he commits during his rise to power, but what if that’s not the case? Perhaps, she suggests, it’s his sexuality that will come to the fore as the nation is forced to confront the reality of a Commander in Chief who doesn’t just have an open marriage, but a bisexual one. Considering the way sex scandals have plagued past presidents—including Clinton, who reportedly enjoys the show—it seems more likely that if Frank is outed, it could prove disastrous for his political career. These storylines could become important as Frank fights to suppress them.

More so than the threesome scene, one of Frank’s most interesting scenes is the one in which he goes down on reporter Zoe Barnes in the first season. It’s another highly unusual moment for television. Female pleasure is rarely featured on TV, which tends to focus on the experience and sexual needs of men while leaving women bobbing along in the wake of their partners. In this rather explicit scene, Frank is focused on Zoe’s sexual experience—though he’s clearly deriving some enjoyment as well. It feels like a moment of supreme creepiness, in part because she’s on the phone with her dad when Frank starts going down on her. It’s not the oral sex, though, that’s depicted as disturbing, but the troubling power imbalance between the two. While it’s obvious that he’s using Zoe, the scene also speaks to something deeper in Frank, one of the reasons her murder later in the show feels all the more shocking and brutal. To see a man focus on giving pleasure to his partner and then casually kill her when she poses a threat and is no longer useful is chilling and a testimony to his lust for power.

House of Cards is a world that pushes the boundaries of sexuality, both within the framework of television, and within society itself. Depictions of open marriages, female pleasure, threesomes, erotic asphyxiation, lesbian relationships, and so much more are rarely seen on television, especially not on the same show—and in real life, many of these things are stigmatized and shuffled under the carpet. The depiction of sexuality also occurs within an intriguing framework, as almost everyone is obsessed with power and prestige, and sex often becomes a means to those ends—leaving the show walking a tightrope between depicting the characters negatively and depicting sexuality negatively. For the most part, it does very well, distinguishing between horrible things that characters do to each other and the way they interact sexually.

House of Cards provides an opportunity for some viewers to see relationships like theirs depicted on screen for the first time—which is why the discussion about how the show deals with sexuality is so important.

Related Reading: In Mainstream Media, Polyamory is Getting Attention.

s.e. smith is a writer, editor, and agitator from Northern California. smith serves as the Deputy Opinion Editor for The Daily Dot, and Social Justice Editor for xoJane.

That article kept referring to Frank Underwood as gay. The title even said, "Is Frank Underwood gay?" And kept making references to Shakespeare as well. And NOT one person in the comments said anything about it. Literally all they kept saying was, "hmmm well he might be gay". No one ever bothered to say something like, "it never occurred to any of you people that he's BI?!" Especially since he's shown to have relations with women. It was so frustrating! Male bisexuals are still being ignored. And I'm pretty sure Shakespeare was bi himself.

It's about time we had some decent bisexual/pansexual/polysexual representation on U.S. television. Of course, I would like a little less of the "depraved bisexual" trope in the media, precisely because there are so few explicitly bi/pan/poly characters. I'd like more bi/pan/poly organic gardeners and talk show hosts and soccer moms on TV, but I'll take a sociopathic politician here and there too - especially if the writers can bring themselves to use the b-word at some point in the series. We do exist, you know! And we're not actually invisible!

Have to admit; love this show. More importantly, I love non-monogamy being shown as a normal part of the love lives of a strong couple. No, they aren't perfect.. there's jealousy and snarkiness. They aren't even necessarily "good" people... but their commitment to each other is obvious and that's what a lot of monogamous couples lack. It's refreshing to see (despite the murder and back-biting) a non-monogamous pairing that isn't religiously based and strictly polygamous.