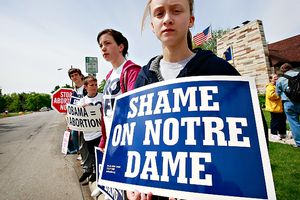 Word came yesterday: The University of Notre Dame has hired Brian Kelly away from the University of Cincinnati to be its new football coach. Kelly, a pro-choice Catholic with extraordinary coaching skill and success, takes the job just six months after the a strong segment of the Notre Dame community protested President Obama's commencement address at the premiere Catholic university, citing Obama's pro-choice beliefs as its point of discontent.

Let's be clear ... most people connected to Notre Dame realize that a person's beliefs about abortion rights have nothing to do with their suitability to take a coaching job. But as ESPN's Tim Keown describes, a vocal segment of the community has nonetheless lit up the online message board debating whether Kelly's pro-choice belietfs should remove him from consideration for the job. As Keown writes, before Kelly's hiring was a done deal:

... I know: Message boards are not exactly MIT graduate seminars, but it is being discussed. ...

The only question is: Does a football coach want to put himself through that? How many jobs outside the Vatican, the Supreme Court and Planned Parenthood could a person's views on abortion be a consideration?

And how they know Kelly is pro-choice is unclear. He isn't known to include pro-choice literature in the Bearcats' pregame notes, though he did once volunteer for Gary Hart.

Going in, Kelly should be aware of one fact: No matter how irrelevant the abortion issue might be, and even if it isn't brought up in any official capacity, you can be sure some group is going to show up and protest outside his door the day he moves into the office. And more than a few of them are bound to have the crazy eyes going.

Look, Notre Dame's decision-makers have every right to hire any coach they want, and they have every right to set the criteria as they see fit. They could bypass Kelly for his diet, for all I care. But as a Catholic, I find the intrusion of the doctrine-obsessed into everyone else's life a tiresome bore.

And if Notre Dame decides to go that route to appease the one-noters -- again, there's no indication it will -- it shouldn't stop with abortion. Why don't the Irish ask Kelly his stance on capital punishment? How does he feel about compassion for the poor and underserved in our country? What are his opinions on the clergy abuse scandal?

What charities does he support?

Neal Hayes at the Chicago Sun-Times adds more detail (again, in an article published before the Kelly hiring was final):

When you talk about a football coach being pro-choice, it usually means he reserves the right to punt or go for it on fourth down. In Notre Dame's case, it takes on a different meaning ...

Where precisely (Brian) Kelly stands on what should be a private issue is uncertain, and frankly nobody's business, but if true it could be a deal-breaker for many on the Catholic university's campus. ...

A bit of context: Notre Dame has a golden football reputation, despite its decidedly mediocre record for the last twenty years so. Nontheless, it still ranks third in college football history (my alma mater, the University of Michigan is, ahem, number one) with 837 wins and won national championships under coaches such as Knute Rockne, Frank Leahy, Ara Parseghian and Lou Holtz. This year, Notre Dame finished with a 6-6 record.

With the news of Kelly's hiring, most Notre Dame fans are busting with glee, while Notre Dame detractors (and they are numerous, passionate) are gnashing their teeth. As my friend and fellow Michigan Wolverines fan put it in an email, "He will be an excellent coach. Goddamn it. I want him for Michigan, not Notre "Fucking" Dame. ... Congratulations, Notre Dame. The blind squirrel has found its nut."

No matter your vantage, Notre Dame made the right choice for this job.

But, as Keown noted, the vocal minority has very different ideas about, well, "right choices." The comments I've seen as I've prowled the internets on Kelly coverage have revealed varying degress of sense:

irish fan: So simple, so sensible.

If Brian Kelly wins as much as he did at GVSU and Cincy, he could open a Planned Parenthood right in the student union. Notre Dame wants to win just like everyone else. It's just that they haven't lately, so 'high standards' has become a convenient alibi.

I attended a Catholic High School in Michigan and my freshman year of college, where I competed on the Cross-Country and Track teams, at the age of 18 I fathered a daughter. When my girl friend told me she was pregnant one of the first people I turned was my high school basketball coach.

Even though my girl friend’s parents were more than happy to pay for an abortion my former coach helped me think through the situation, advised me on how to break it to my parents and how to convince my girl friend’s parents I would be a responsible father. We did not abort. When my daughter turned 3 her mother decided to leave us and I became a single parent. It would take a number of years going to school part time while working full time to earn my degree and few more year to earn my MBA. My daughter would grow up and attend the same University where I earned my degrees Grand Valley State University (GVSU). Oddly enough during Coach Kelly’s tenure at GVSU where he was winning his first National Championships my daughter, who some believe should have been aborted, was President of GVSU Student Senate.

It is hard to imagine that I am the last college athlete to find themselves in this situation. With the numbers Notre Dame carry on their football team Coach Kelly will undoubtedly at sometime will have one of his players ask to see him about a similar personal matter and he will have to advice and mentor his player.

From my personal experience I believe a coach’s personal morals and standards are very pertinent. I do not feel Coach Kelly’s Pro-Choice moral beliefs are a good match for a University that calls itself Catholic.

I just found your post and I find it interesting. Try visit my page it, I provide reviews about marriage, <a href=http://www.bedroomsports.com/sex-toys-for-men/>sex toys for men</a>.

Hola! I've been following your website for a long time now and finally got the courage to go ahead and give you a shout out from New Caney Tx! Just wanted to mention keep up the great work! 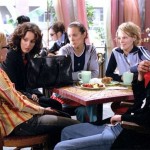