NPR Explores Why the Voices of Women Are Taken Less Seriously 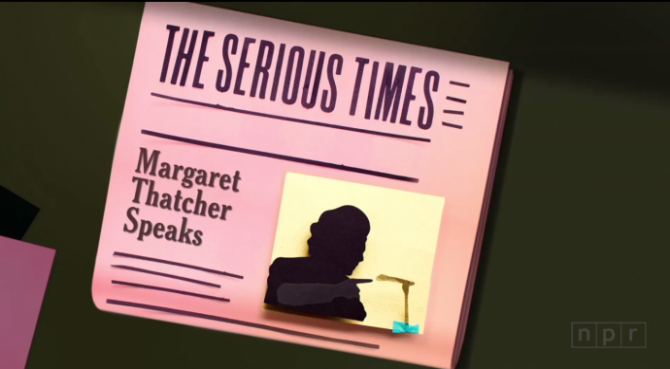 Your voice is too squeaky, it’s too loud, it lacks authority, it sounds childish, it’s grating or obnoxious or unprofessional. Ever heard that before? Many of the women reporting for NPR have.

The team at NPR worked with animator Kelli Anderson to put together this animated video of Selena Simmons-Duffin’s great audio report, “Talking While Female.” The report discusses how people have an tendency to think lower-pitched voices have more authority and express greater knowledge. This can lead to people dismissing the voices of women, saying that people who speak in higher-frequency ranges don’t know what they’re talking about. This trend plays into mansplaining, of course, but also it’s important to recognize how men host the majority of podcasts. Because radio is a male-dominated field, listeners are used to hearing deeper, male voices more often as hosts. As women make headway in becoming TV anchors, radio hosts, and starting up women-hosted podcasts, maybe the listening tastes of audiences will change, too.

Read about Anderson’s process for making the video here and read the NPR transcript here.

Related Reading: Why are 70 percent of podcasts hosted by men?

Sarah Mirk is Bitch Media’s online editor. Oh, and she hosts a podcast.

What determines a person's voice may be biological, but our response in judging a voice-- the associations-- are learned. The judgement is not biologically driven, it's a result of learned misogyny, and it can be unlearned and changed.

Completely agree, no grounds at all to claim these judgements are biological. Women are seen as less capable of handling authority than are men (hormones!!), so it follows that women's/higher pitched voices would be perceived as less authoritative.

There is a LOT of vocal fry in this... I ironically started to notice as soon as one of the women said "so what IS vocal fryyyyyyyyyyyyy *creak creak creak*...."

Ironically, I think sometimes vocal fry happens because women are trying to make their voices go lower than their natural register.