It May Be Different for “Girls,” but the “New York” Magazine Photos Are More of the Same

Emily Nussbaum’s cover story for the current issue of New York magazine, “It’s Different for Girls,” is about how Lena Dunham’s hotly anticipated new HBO series is, well, different. As much as an HBO show about white twentysomethings in New York can be different, anyway. And it’s a great profile piece for anyone interested in the show (which I am), as it gives some insight into how it’s being made and how Dunham is operating as the show’s creator and star. What I don’t understand, though, is how this profile inspired this cover: 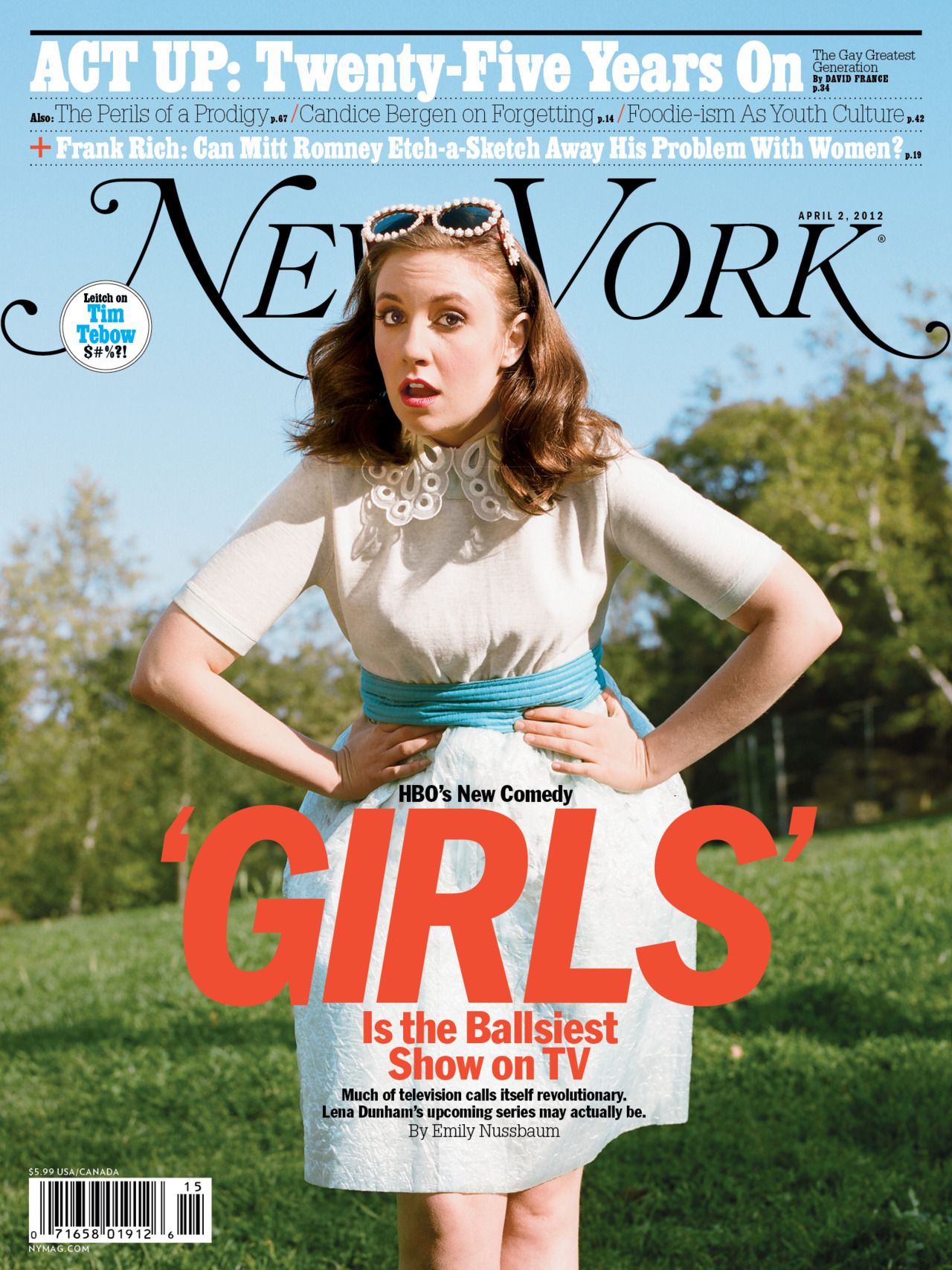 If the point of the article is that Girls is a “revolutionary” show with a refreshingly honest and thoughtful young woman at its helm (and by all accounts that description of Dunham is accurate), how did we end up with this cutesy, canting cover juxtaposed with the word BALLSY under it? Another photo of the cast from the shoot, far from seeming “different” or “new” or “honest,” appears to have been ripped from the back of the Virgin Suicides DVD: I’m not saying that Dunham and her costars don’t look nice in these photos (they do), or that these photos are somehow offensive or shocking (they aren’t, at least not really). However, for a cover story about a show that’s said to be groundbreaking precisely because it doesn’t gloss over the less-than-pretty parts of being a young woman, these shots are about as stereotypically pretty as you can get. Says Nussbaum about the depiction of bodies on the show:

Dunham films herself nude, with her skin breaking out, her belly in folds, chin doubled, or flat on her back with her feet in a gynecologist’s stirrups. These scenes shouldn’t shock, but they do, if only because in a culture soaked in Photoshop and Botox, few powerful women open themselves up so aggressively to the judgment of voyeurs.

Not exactly the spirit that comes through in the cover pics, is it? Do we need Dunham in her underwear on the cover of New York magazine in order to stay true to the ethos of Girls? Of course not. But these photos go in the complete opposite direction, placing Dunham and her pale-frocked costars firmly in the male gaze—cemented there by the use of the word ballsiest.” (Remind me why we need to use that term to describe women, again?) Instead of representing a “retort to a culture that pathologizes feminine adventure,” these photos depict it. Is it too much to ask that the media coverage of a show that’s honest about (a certain kind of privileged, educated white) women’s experiences at least reflect that? Ugh, maybe it’s not so different for Girls after all.

It's called "juxtaposition".
This nitpicking-in-the-name-of-progress feels very teary-downy.
Can we critique something that actually needs it?

I don't know the photographer's intent, obviously, but these photos felt to me like they were missing the point. It's fine to disagree (maybe you're right and juxtaposition really was what NY Mag was going for), but a mainstream publication's coverage of a buzzed-about show made by young women for young women is indeed relevant to a feminist pop culture organization. Well, obviously I feel that way.

At any rate, I certainly don't mean to tear down <em>Girls</em>—I'm looking forward to watching it. I just don't like these photos because, to me, they represent everything the show itself is supposedly NOT about.

Well, but, that pose is not "stereotypically pretty"... Look at her face and the exaggerated posture. She's parodying the pose.

I always say that I have balls just like a man does, but they are better protected than his are.

Thanks for introducing me to this show.

Yeah, I'm not seeing what's revolutionary about this show just from looking at this pictures. I can't get passed the all white female cast...and you're totally right about those pictures (why are they all wearing dresses?).

I'm still waiting for another show like Daria to come along..I'm pretty tired of Sex and City type shows...

I will probably check it out, but if it's not particularly "diverse" in terms of cast and storylines (I, too, am so tired of those "Sex and the City" type shows), I don't think I will keep watching.

I am also still waiting for another show that's reflective of those awesome "Target Women" clips -the Sarah Haskins ones, NOT the Erin Gibson "Modern Lady" ones. Watching them repeatedly on YouTube is, unfortunately, becoming tiresome.

The thing is, it doesn't matter if you show your zits or your flab if you're still some privileged white girl, it's still going to be boring and painful, and not in any way different or groundbreaking. At least, that's what I think after accidentally watching the first ten minutes of Tiny Furniture.

Are you really saying that shows about white women can't be interesting or progressive, no matter what? There are loads of ways to be privileged other than race. Plenty of us "privileged white girls" still don't see ourselves on TV.

I mean, these grown women are dressed as girls. I don't think it looks as ballsy as it could but I see what the photographer was trying to do--- Grown women dressed like little girls is a bit odd and from where I am standing, it doesn't look as natural as if she were wearing skinny jeans and a silky blouse ,etc. I get it, but not very well executed, imho.

<p>The show seems like it will have merit. the mass media will portray their cover story however they wish. Doesn't mean I have to pay attention to it.</p>