OK folks. You know how we feel about this year’s Kay Jewelers ad and the holiday-themed pap smear PSAs, but which holiday ads are making you want to throw your remote/magazine/newspaper/laptop into an open fire this year? There’s only one way to find out! It’s time for OFFENSIVE COMMERCIALS: HOLIDAY SHOWDOWN!

Looks like Bay has created a feminist bizarro world with this spot. In his fantasy land, women are pool sharks, fighter pilots, film directors, and serious ass kickers. The catch? They are all wearing only lingerie. So close, yet so far. And the mark is missed even further with that “1,000 Fantasies” slogan. You know, because if you buy a woman a bra she’ll morph into a six-foot tall fictional character. With boobs. 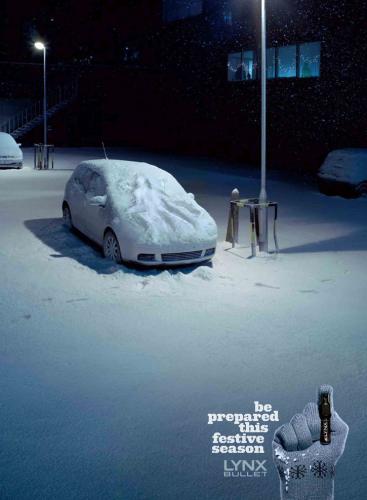 Yeah, you bet we’ll be prepared this holiday season. Prepared to defend ourselves from the Lynx-toting date rapist lurking after hours in the mall parking lot. When I showed this ad to someone at the office she said, “This ad could be for pepper spray and nothing would have to change but the product name.” So true, and sooo creepy.

‘Tis the time to liberate? Thanks, Gap. We’ll keep that in mind while we’re 86-ing the rules, and doing whatever we want-u-kkah (on the way to your corporate-run retail outlet, of course). Not only is this ad completely irritating, it also presents a false image of what The Gap is about. Why on earth would they equate liberation with buying plaid shirts made overseas by underpaid workers? It doesn’t add up.

I know this ad is from last year, but I’ve seen it on TV this season as well, and it’s just as ridiculous this time around. How is this couple in such a serious relationship (celebrating Christmas morning together) if the guy barely knows how to sign? And can that shiny watch really make up for his lack of communication skills? Well, judging by her smiling face and kissing lips, the answer is yes.

I am restraining myself here and only including four holiday commercials in the showdown instead of the hundreds that could have been entered. If you’ve seen an ad that took the jingle right out of your bells this season, tell us about it in the comments section! Until then, it’s SHOWDOWN TIME!

Not that every other one of these commercials doesn't disturb me, but the "Holiday in the City" ad from Old navy is way creepy with the Modelquins ice skating around. Great idea, I'll want to buy clothing that makes me seem like a plastic, lifeless "model" with a stick up my ass! Oh yeah, and not have the ability to use my head properly (as one male modelquin does while ice skating)... added bonus!
http://www.youtube.com/watch?v=41tPE6OZ87o

I was going to vote, but seriously...couldn't decide which one to give it to. The first time I ever saw that sign-language jewelry commercial, I ranted alone in my apartment for like 10 minutes. One can only assume the sparkly-ness can hypnotize her into overlooking the fact that he hasn't even learned her language past the point of simple, two-word phrases. (oh, us women and our diamonds!) The Victoria's Secret commercial is, as always, just so beyond anything that's realistic or encouraging or supportive of women, womens' rights, equality, non-objectification, etc. The body spray one is just beyond creepy. It's the exact reason I walk with my keys stuck through my fingers when my car is parked across a dark parking lot.

I have spent way too much time thinking about that jewelry ad. Maybe she reads lips most of the time, and he only started learning ASL as the started getting serious. But how many deaf people read lips and use ASL? My understanding and experience is that it's usually one or the other.

Anyway, I think it's the least offensive of the four, by far, and isn't even that bad compared to other jewelry ads (like the godawful 2am one from this year.)

Although I agree with you on all the other ads being pretty shallow/disgusting/etc., the last diamond one didn't bother me as most other diamond ads do. Usually they're all about "making a woman fall in love with you" because you ave a shiny, pretty thing in her hand. But the couple in this ad, they seemed more comftorable, but havent particularily been together for long, and you see him making an honest, difficult attempt to become fluent in her language. I didn't read it as something like "argh, she's hot and she doesnt bitch or moan which is great, but this sign thing is too damn hard. Ah, fuck it, I'll just buy her something shiny."
Hate the Victoria Secret one though, I mean, it almost looks like they may be TRYING to go for (incredibally feeble) "girl power' by making them ride motorcycles and such, but overall, they are still just being completely objectifyed.

I think the Victoria Secret one was funny because... it's just so... outrageously silly. In the meantime, I don't really see how they could sell lingerie without it being about boobs boobs boobs. or ass.

That Ax ad has my vote. It is creepy and teenage boys shouldn't be buying into that creepiness.

I think it's the let-the-shiny-distract-you-from-scary-scary-halfassed-storm one that bugs me the most this season, but the Victoria's Secret is irritating purely because it would be <i>So Easy</i> to do it better. Why not a commercial with a bra hanging from the ceiling, cut to a couple in silhouette on the floor, and then the line "Because some things work better than Mistletoe."? Or, going with the fantasy line, something about making sex fun? Honestly, flickery images of women who all have the same expression is more creepy than sexy -- sex being something that pretty much always involves more movement than posing.

THANK YOU for mentioning that ridiculous commercial about that love... embrace... whatever necklace. I think that should definitely have been included, I mean seriously. Girl-can't-face-the-storm-alone-or-life has definitely had me scoffing at the television since the first time I saw it. Way to treat her like a baby and then prove your love with a sparkly thing. Awesome.

I think what upsets me most about the victoria's secret ad is whose fantasies we're talking about. Does a bra really open up a door to a (based on the director i'm assuming he created this within a heterosexist framework and therefore she is straight) woman's top 1000? It seems that the bra isn't supposed to be something exciting for the giftee, but the giver. Not like VS is incredibly well known for being women-positive, but seriously, at least they usually try to market the text to women ("the most supportive, most invisible, bestest sexiest awesomest bra ever! it will solve ALL of your female boobie problems!"). This ad seems to ignore the woman who will be wearing the bra completely except for the body that the bra will be on, and that is the most disturbing part.

I agree with you about that Kay Jewelers storm ad! In fact, I would have included it here but I already blogged about it separately: http://bitchmagazine.org/post/every-kiss-begins-with-fear

That shit is wack.

I'm so glad several of you mentioned the Kay Jewelry "scary" storm commercial! That is by far the worst that I've seen as far as the multitude of holiday jewelry commercials that came out this season!
It's not holiday related necessarily, but has anyone seen the Bod Man cologne ads? Here's a clip from the one that has been playing currently. It's very reminiscent of the Axe body spray commercials where two women begin ripping his clothes off and practically having sex with him on the dance floor! There's something not quite right about this ad, not to mention it's obnoxious!
http://www.youtube.com/watch?v=-lK7tnlt6UA

I hated, hated, HATED the ads for <a href= "http://www.nytimes.com/2009/12/08/health/08well.html?_r=1">Reebok EasyTone shoes</a>. Using bullshit science to propagate sexist, misogynistic products... charming, really. I didn't know whether to be more offended on a scientific or a feminist level.

Oh, and then there was that Verizon Droid 'Princess' ad. Feministing did a good job of talking about what exactly was wrong with it < a href="http://www.feministing.com/archives/019166.html">here</a>. All I can say is... didn't we get over 'boys rule/girls drool' in fifth grade?