Erika begins this comic by saying, “My Dearest Perverts! Today I bring you something completely different – The Revel Body! Kindly sent to me by Revel Body.” Erika provides “The Deets” with a diagram of the Revel Body, indicating the price, material, size, speed, and charging abilities.

Erika says, “Thing is, though it looks impressive when you turn it on… As soon as you touch it down to your bits, science happens and the toy becomes super gentle. Matt tried to explain to me why this happens… And well it’s a headache of a sciencey talk. Damnit Jim, I’m a cartoonist, not a physics-understander-er.”

Captain Janeway tells Erika, “Basically you expect warp power and instead you don’t even get impulse engines.” Erika says, “Ah, see that? That I understand.”

Erika is sitting on an oversized Revel Body as she says, “I wanted to like this toy so much! The company sounds super sex positive, the toy is aesthetically pleasing, and they invented a brand new motor that’s easier on the environment, less noisy, and won’t break down as soon as a regular motor will. All good things! But there’s just no way to get around the fact that it’s barely a gentle whisper of stimulation.”

Erika continues, “The Revel Body in its current incarnation may not be up to snuff, but I really am excited to see what this company does in the coming years. They’ve got a solid first draft and I hope with time and practice they’ll improve their new technology enough so that it actually can deliver The Business. Revel, I look forward to putting my genitals on your future products, but for the time being I’m affair I’ve got to pass on this guy.”

Captain Janeway looks disgruntled, “So now how am I supposed to pass the time while my crew travels the 70,000 light years back to Earth?” Erika winks and says, “I guess you’ll just have to initiate first contact… with your hand.”

You only linked back to your own site after reproducing the comic in full... you might want to link to the artist's website :)

Hi!
I think your comment is saying that it's unethical to cross-post this from Erika Moen's site without linking back to her. It's nice of you to be aware of that issue, but Bitch pays Erika in order to syndicate her comic on our site. We have specific policies for linking back and providing ample credit when we do cross-post, but this series is one we pay Erika for the right to publish.

Let me know if that doesn't answer your concerns!

Hahah this was really funny. I read it twice and now i have got a severe stomach ache because of laughing :D 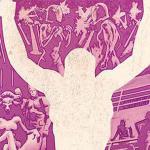 by Sarah Mirk
The series brings a vital critique of incarceration to the vibrant pop culture world of comics.