Tube Tied: Okay, But What About the Women on Mad Men? | Bitch Media

Tube Tied: Okay, But What About the Women on Mad Men? 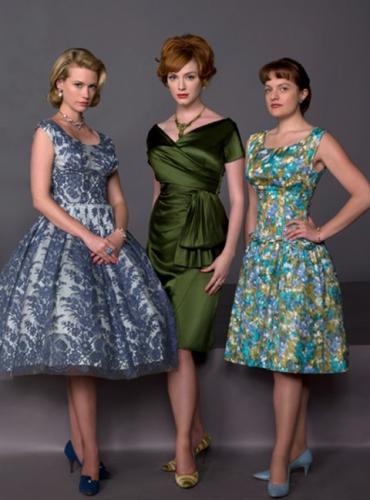 I can't say that this first episode of the third season of Mad Men wowed me, but I suppose it was inevitable, amidst all the hype, that the episode would disappoint at least one person in its audience.  And indeed, it was something of a shaky start.  Don's reminisicing - or, really, more accurately, reimagining, since he can't possibly remember - the circumstances of his own birth made for a rather confusing opener.  Not only did there seem to be, literally, a dick joke in it (not a particularly clever one IMHO), it was an oddly sentimental moment for a character whose trademark is emotional opacity.  Don has never been the kind of man who much interests himself with the inner lives of women, or more particularly someone attached to the notion of mothers and origin.  He is, as the old saying goes, the epitome of a self-made man, constructed entirely of the things he thinks he wants to be, however disappointed he may be when he gets them.

These scenes seemed designed to tell us that Don is newly recommitted to his life at home with Betty and the kids (who are soon to number three).  But we swiftly learn that he is still a womanizer.  But there's something new about his taste.  One of the things that has always rescued Don from the "complete tool on the subject of women" column has always been his interest in what used to be called "difficult" women - sexually-free, bohemian Midge; reluctant adulterer Rachel; ambitious Bobbie; mysterious Joy.  Whatever might be said of Don's philandering, in short, at least the man had taste.  But this time, Don is after an airline stewardess (played broadly by Sunny Mabrey with an irritating accent) for whom mystery and subtlety are foreign concepts.  And, for the love of God, she's a blonde - very much what Betty might have been had her modelling career tapered off (the
stewardess coyly offers that she is asked all the time whether she, herself, is a model) and she had never gotten married.

We are meant to be comforted by Don's utter discretion as to Sal's sojourn with the bellhop, I think.  The lead-up ("I just want you to be honest with me") was a trademarked moment of Mad Men dramatic tension.   But unlike his "You will not believe how much this never happened," speech to Peggy last season, Don's silence as to what he saw Sal doing seems more of a piece with Don's insistence that work and play be kept separate - he is among the most private characters ever shown on television - than any genuine connection with Sal's suffering.  It was an implied reassurance of silence rather than one spoken aloud, and though Sal took it at face value, I couldn't help but wonder if he would see it as enouragement, or whether he's about to go back into the closet hardcore.

And for a show that has made so much of its street cred on the depiction of female characters, they were deliberately relegated to the background in this episode.  Like some other people, I suspect Joan's "I can't wait until I'm out of here" remark referred to a pregnancy - not least because the costume designed to be padding Christina Hendricks' oft-fetishized figure, particularly around the midsection.  But we got only Peggy nagging on about her secretary for a brief scene before it was back to the men, and a bit of anachronism from Betty (I highly doubt a woman of her background and education would have had much of any kind of idea about lesbians in 1963, girls' college or no).  More women, please.

And if anything, the men's petty jealousies around the office are far less interesting than the women's.  God knows I loved Pete's little interpretive dance of weaseldom as much as anyone else - in my view, it was the clasped hands that sealed the genius of it - but I can't say I much look forward to repeated childish death stares at Ken Cosgrove in lingering shots.  Pete had displayed some growth over the last two seasons, and one thought that Peggy's revelation of their child might have matured him even more, but he seems, in this episode at least, to have returned to his old caricature habits: pouting and overinvestment in office politics.  Mad Men's genius is subtle characterization, and they need to pull in the reins on Pete before they let themselves get out of hand, it seems to me.

What did you think?

Although I definitely liked this episode of Mad Men, it did give me a somewhat vacant feeling, mainly because of two points that were made in this piece. 1. I am a self-proclaimed love/hater of Pete Campbell. For all his jerk tendencies, there were specific moments of growth in his personality. It is hard to make this type of character complex and fully realized, but Mad Men had managed to do that, until the Season 3 opener. Pete displayed all of the stereotypical self-entitled faults of this type of preppy frat boy accustomed to always getting his way. It seemed to be a complete back pedal from all of the character development he had experienced. 2. Don's obvious choice of "ditzy blonde" for his affair. It was a let down, given Don's penchant for choosing complex women for his marital infidelities.

As for the lack of women, I doubt that will continue. At least I hope not

I, too, was a little disappointed by the lack of women in the premiere, but I have no doubt they will come back quickly (and with a vengeance! :-)

However, I wasn't as disappointed with the male portrayals. For one thing, Salvatore's experience is a *really* big deal -- he finally got a little action! To me, Don's reaction actually was equivalent to his reaction to Peggy. His comment to Peggy was basically: "Like you, I have a huge secret that threatens my standing in the workplace. You should repress this secret and move forward, like I did." His comment to Salvatore cannot be that -- that is the kind of thing that *would* send Sal back into the closet. Instead, he says, "limit your exposure" -- in other words, "do what you're going to do, but be careful, keep it on the DL." Peggy's baby = Don's "real" identity, whereas Sal's homosexuality = Don's cheating. One is to be forgotten/repressed, the other is to be explored but kept secret. I am NOT endorsing EITHER viewpoint!!! But this seems like the best way he could deal with the situation given the circumstances. He could have said: "Peggy, you're a slut, you're fired," or "Salvatore, I'm disgusted by your homosexuality, you're fired." Alternately, it is not the world of today, so he can't say, "Peggy, you're a bright woman who can be open about her sexual activity and history while still working your way up in the workplace!" or "Salvatore, it's ok to be gay -- divorce your wife and march in the non-existent gay parade!". He can't say to them, be proud and out about who you are. But he can say, be who you are, and don't let it interfere with the other things you want in life; you can have it all, but some of it has to be secret. He understands about secret pasts and secret lives below the perfect surface. It's not an ideal worldview, but it's probably the best he could offer them -- outside of "dropping out" of society altogether, which he himself flirted with and which I'm sure someone on the show eventually will, but none of these characters are ready for that dramatic and radical of a shift.

What struck me about his dalliance with the stewardess was how reluctant and passive he was about the whole thing -- what was that about? It was one of the most boring seductions ever, which makes me think it was supposed to be boring (?). And re: his past -- I think he's always been sentimental about his "real" origins. It's his achilles heel, the "fraud" center of his self-made-manness. It has always haunted him, no matter how hard he tries to repress it...

One of the things I trust Matt Weiner to provide in this show is balance. I think he conceives of the entire season as a whole before he gets anywhere near breaking it into individual episodes, so 6 months from now when we view this episode as part of the larger arc, it'll be more even. I hope.

The opening premiere, to me, was about Don dealing with the birth of their child, visualizing every possible outcome - baby dying, mother dying, parents not liking the child. I think the stewardess thing was about seeing a non-pregnant body, about not turning down a sure thing, about the playacting idea (since so many of his flings in the past were with women who Really Saw Him, the idea of a woman who couldn't see anything about him was probably appealing)

Weiner has said in the past that a lot of the show's development comes from what the women are saying, and the men aren't saying. In this episode, the balance was the opposite. Joan's manipulation of Moneypenny was totally behind the scenes, but it led him to say "this place is a gynocracy."

That said, I too want to see more about what the women are doing - what's Joan's homelife like these days? What is insipid little Jane doing with herself? When is Peggy going to meet a man any of us can stand? Will we get to see more of Harry's wife and their new baby.... There's just never enough time with 45 minutes of television to live full in that world, for me!

I agree that the season's start left much to be desired, and that the audience was intentionally misled about Don's recommittment to his family. I believe what the stewardess scene was intended to convey is that Don's philandering will be relegated to women outside of his wife's reach. He seems to express some sadness in the closing scene, however, and one wonders if that may be regret that he has not been able to change his behavior or just the same residual, stoic sadness he demonstrates.

And you're absolutely right about the anachronistic use of the term "lesbian". For a show that prides itself on being so unfailingly time-specific, they certainly dropped the ball on that one.