The Body Electric: On "9" and Its Canvas-Bodied Heroes | Bitch Media

The Body Electric: On “9” and Its Canvas-Bodied Heroes 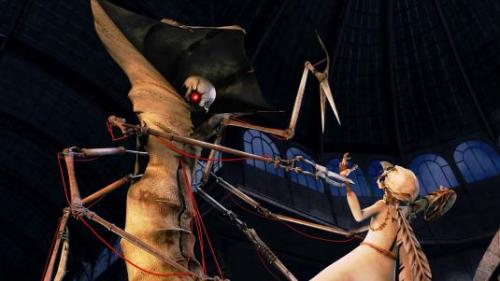 Though I appreciated and enjoyed "Wall-E," I took issue with the baffling insistence of the filmmakers to gender the robots. A love story between machines is an interesting prospect with very queer implications, but clearly signaling gender seems like a counterintuitive safeguarding against an overly-sensitive and ultimately homophobic population. All of this is to say that I went to see "9" with a similar expectation: that the canvas-bodied creatures who populate the post-apocalyptic setting of the film would be arbitrarily gendered (despite their obvious lack of reproductive capabilites) in order to accommodate the inevitable heteronormative love story (because love would be the first thing on my mind in a terrifying wastland). Thus prepared, I settled into the theater and, once the lights went down, spent the next hour and a half in stunned awe.

With references to Jung's theory of integration, pre-Christian traditions, and the problematic divide of heart and mind in modern times: this is likely the most intelligent, subversive commentary on science, spirituality, and the creation of culture produced in the last many, many years. The film is rife with huge questions that make most people really uncomfortable: which, as far as I can tell, is the only explanation as to why so many of the reviews seem to have missed the point entirely.

If you haven't already seen the film, go ahead and watch the trailer here.

9, produced by Tim Burton and based on director Shane Acker's original short film, is a dark CGI meditation on the familiar post-atomic bomb sci-fi theme of the cost of advancing technology divorced from real-world meaning and implications.

The human scientist responsible for creating the 9 canvas characters also designed the haywire, soulsucking (literally) robots that dominate the 9's wasteland landscape. We learn through flashbacks that the scientist crafted the machines in a WWII-esque time, but they revolted soon after and the scientist ultimately blames himself for designing from such a cold, inhuman part of himself. Right before the scientist dies, he creates the 9 and imbues them with different aspects of his soul. His hope is that they live on to access a wisdom that extends beyond the measured, scientific precision he used to create the robots in the first place.

The 9 dolls lack secondary sex characteristics beyond their voices (and the voice cast includes some pretty huge names: Jennifer Connelly, Elijah Wood, Christopher Plummer, and Crispin Glover ). Of particular interest to me is Connelly's character, #7, who is the sole female-voiced part, and who spends the majority of the film bearing signifiers of a traditional shaman (one of several references to pre-Christian culture and religion in the film). #7 is one of the only dolls who is costumed. Note the similarity in her attire to that of a Shuswap Native American shaman: 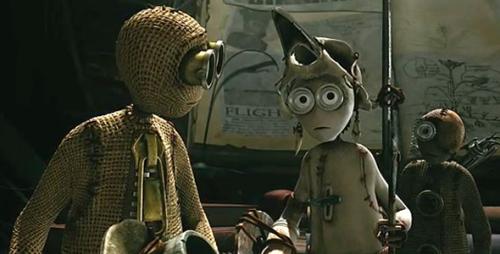 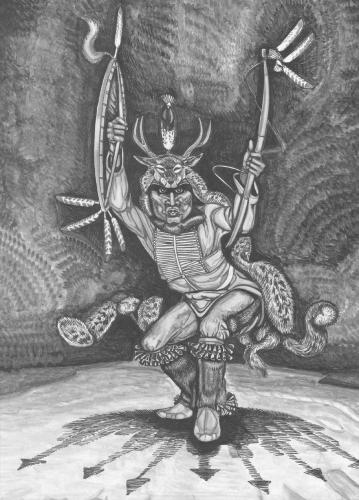 Shamans are healers and mediators with a history in many traditional cultures, and many shamans transgressed gender binaries through transgressive spirituality.  When it is revealed at the end of the film that the 9 are actually all components of the soul of the scientist himself (the last scene is basically a cinematic representation of Jung's theory of individuation--the total integration of all parts of a person into wholeness--combined with a clear reference to pagan ritual), the choice to make #7 a female-voiced, shaman-esque character is all the more pointed.

There is much to unpack in this film, and I can't do it justice here. From the references to cooperative wisdom to honoring the visions of the "mentally ill" artist (Crispin Glover as #6 ) as a deep source of knowledge (and, quite literally, the key to release); from the self-sacrifice of the fear-based, rigid religious-type figure (#1) as the only way to fight the robot monster to the incorporation of "dark magic" (and Jung's idea of the shadow)--9 is a stunning call to arms, a reminder of the power located in cooperative humanity and interdependence, and an anxiety about the potential "soullessness" of our faceless technology. More than anything, 9 is a challenge to remember our roots--to merge the intuitive and the mystical into the scientific, to understand our place in all things, to not get caught in our beliefs or our politics or--most especially--become chained to the powers of our intellect alone.

And, for what it's worth, I don't think it's any mistake that the neo-gendered are the symbols in this film. I think that these 9 canvas creatures are the perfect forms to hold the characteristics--rigidity, creativity, invention, insanity, nonverbal wisdom, heroism, fear, synthesis--that live inside the scientist, the person, inside us all.

This movie was amazing.
~tabitha~

#7 was a totally badass, brave warrior too.

Also, (spoiler) since all of them were made from elements of the scientist who created them, she could be his Anima - if one does consider her female, it is as a female aspect of the male inventor.

Ladies, am I the only women who doesn't like Tim Burton flicks? I just don't get all the hype. I tried, a few years back to watch on of his movies, the Christmas one, and honestly kinda thought it sucked. I know that his movies receive a lot of fan fair, but I'm more of a Pixar girl...oh well. Nice write-up nonetheless.