Here’s all the news on our radar this morning!

• Remember how Clear Channel was a total douche for refusing to air reproductive health ads? Well, after a month of protesting, the ban has been lifted! [WAM]

• Feministing shares a program created by DC-based organization House Hope that has allowed children of prisoners to attend a week-long summer camp with their fathers behind bars. [Feministing]

• Macklemore won the award for Best Video With a Social Message for his famous gay-acceptance anthem, “Same Love,” and not everyone’s happy about it. Openly gay rapper/producer Le1F from New York City has accused the straight white artist of exploiting the struggles of the queer community for his own interest. [Colorlines]

• In line with recent protests from New York-based employees, thousands of fast food workers from over 35 cities are protesting today to demand a $15 hourly wage. [Feminist Majority]

• Filmmaker Dina Fiasconaro has launched a Kickstarter campaign in support of her documentary, Women and Meds, which focuses on women who take medication for mental illness and want children. Check out the trailer here. [Kickstarter]

• Out of concern for the safety of sex workers, Zurich is debuting drive-in “sex boxes” that feature an alarm button, an emergency exit, and HIV prevention ads. [BBC] 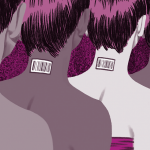 by Jaime Lowe
Threadbare is an ambitious, eye-opening, muckraking investigation into the "fast fashion" industry.