Here’s the feminist news we have on our radar right now:

• Jezebel offered $10,000 for unretouched photos from Lena Dunham’s Vogue shoot. Roxane Gay has critiques this offer as nothing more than “cynical capitalism.” [Salon]

• An examination of images of female flight attendants over time demonstrates the evolution of their portrayal from mother to sex object to worker, and today’s combination of all three. [Sociological Images]

• A recent episode of How I Met Your Mother featured three main characters in yellowface, and a bunch of orientalism. [Angry Asian Man]

• This list of “25 Women Poised to Lead the Culture in 2014” provides suggestions for a bunch of awesome women in film, literature, music, and politics to check out (including Bitch national advisory board member Laura Lippman!). [Flavorwire]

• The new cover of Time, which is about Hillary Clinton, shows that the media hasn’t gotten any better at talking about female political candidates. Thanks, Time. [Feministing] 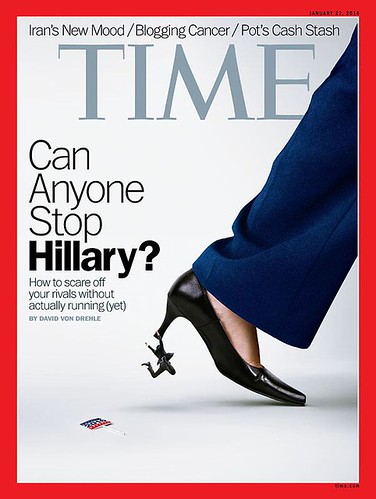 Let us know in the comments what’s on your radar.

At least, it's been one of the less offensive pop culture news sites on my radar lately. Enough for me to bump in into the "daily" section of my feed reader. Hoping this means more sites are noticing that sexism isn't the way to build a large diverse readership.