• 12 Years a Slave won big at the Oscars last night, taking home Best Picture and a Best Supporting Actress award for Lupita Nyong’o. Accepting the award, Nyong’o said, “It doesn’t escape me for one moment that so much joy in my life is thanks to so much pain in someone else’s.”  [Colorlines]

• The Oscars were hosted, of course, by the great Ellen DeGeneres. As After Ellen notes, “An out lesbian wearing designer tuxes, hosted the freaking Oscars. Are you thoroughly basked?” [After Ellen]

• The Feministing crew sounds off on why Her is a great feminist film. [Feministing]

• One Catholic nun is speaking up about the damage the church has done to its transgender members: here’s an interesting profile of the anonymous “Sister Monica.” [Al Jazeera]

• Artists with anti-rape group FORCE installed a giant quilt in front of the US Capitol over the weekend—the red “Monument Quilt” is a memorial for people who survived rape and abuse. [Upsetting Rape Culture] Always loved her, she is amazing! Now it would be even more cool if a gay male celebrity hosted the Oscars wearing designer dresses. That would be badass! :-D 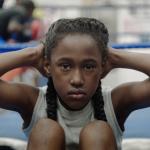