• The Fifth Circuit Court of Appeals upheld a portion of Texas’s controversial abortion laws on Thursday, mandating that doctors who perform abortions must have admitting privileges at a hospital within 30 miles of a clinic and introducing more restrictions on drug-induced abortions. The law has resulted in the closure of a number of rural clinics in the state. [The Wire]

• Justices speak out on behalf of women during the Supreme Court case against Hobby Lobby. Justice Kagan stated, “Congress has given a statutory entitlement and that entitlement is to women and includes contraceptive coverage. And when the employer says, ‘No, I don’t want to give that,’ that woman is quite directly, quite tangibly harmed.” [New Yorker]

• Award-winning filmmakers Sabine Krayenbühl and Zeva Oelbaum have a passion for telling the stories of trail-blazing women who are often overlooked by historians. Their latest project is Letters from Baghdad, the story of Gertrude Bell who drew the borders of Iraq after World War I and founded the Baghdad Museum of Antiquities which was ransacked in the 2003 American invasion. You can support Letters from Baghdad on the project’s Kickstarter page. [lettersfrombaghdad.com]

• Anita Hill gave an interview about feminism, justice, and the new documentary about her life to MSNBC’s Irin Carmon. On speaking out against her harasser she said, “I don’t regret what I did because it was the right thing to do.” [The Grio]

• Snickers produced an ad showing us how hilarious it is for men to be respectful to women public. Hahaha! Also it’s totally fine for men to shout at a women on the street as long they’re shouting “compliments.” [Feministing]

• Adrienne Keene explains why Christina Fallin’s photo of donning a traditional Native American headdress is racist and calls out the musician and daughter of the Oklahoma Governor for writing a hollow apology after the backlash. [Native Appropriations]

• In light of Gwenyth Paltrow/Chris Martin’s “conscious uncoupling” this week, Slate created this handy relationship status generator. Want to find out if you’re “organically psudo-coupled,” “macrobiotically throupled,” or “unreservedly solitary”? Of course you do! [Slate] 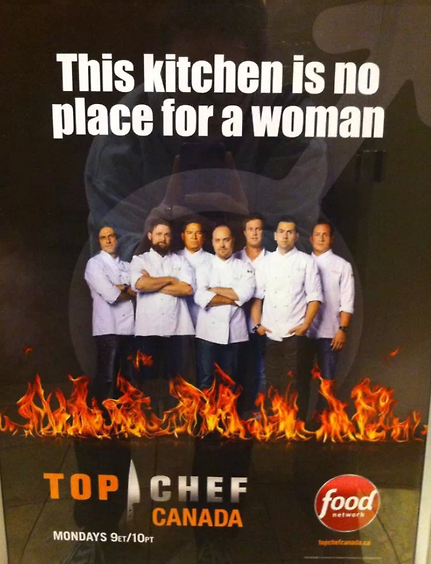 What did I miss? Add what you’re reading to the comments!

It's worth noting that this season of Top Chef Canada is a "battle of the sexes." The poster above represents the men's team and their supposed message to the women's team. There is an accompanying poster with the women chefs on it and the tagline states "Is that all you've got boys?" The entire campaign (and concept) is of course still ridiculously sexist and out of date, but it should be viewed in context. Here's a link to both posters http://www.huffingtonpost.ca/2014/03/11/top-chef-canada-posters_n_494155...

Yeah, but it's also worth noting that the obnoxious "no place for a woman" ad appears on bus shelters and billboards by itself, and therefore out of context. Oddly, I haven't seen its (equally obnoxious) counterpart anywhere except online.

Slightly off-topic: I've been watching this season of Top Chef Canada, and it drives me crazy that the women's team is repeatedly referred to as the "ladies" team. Don't even get me started on the battle of the sexes theme.

many modern feminists have opted for "ladies" as a term. "ladyfest" being an example. i like it, because while "lady" can bring up traditional ideas about what that means, it can also be redefined to something more modern without much trouble. maybe you're a "Lady" in the classic sense, or maybe you're a a Pink Lady like Rizzo. lady is purely social while "woman" is more tied in with biology and heavier expectations. hope this helps.

Amusing (not) that the options for relationship status on the Slate gizmo do not include "domestic partners" - this is a real status, yinz guys. I have a certificate. In fact, it is all that I do have. Domestically partnered is a conscious decision to pay more taxes on health insurance and that's about it.