Good morning! Here’s all the feminist news on our radar this fine Friday.

• We all know that women are capable of writing about anything. Why is it, Roxane Gay wonders, that anything beyond personal stories of love, sex, and “having it all” is such a hard sell in the mainstream media? [Salon]

• Burglars broke into the offices of the San Bernadino Country Sexual Assault Services and stole computers and monitors, but returned all the equipment once they found out that the agency works to help victims of sexual assault. So the takeaway here is that thieves sometimes have a social conscience and that the agency could use more prominent signage. [NPR]

• Women in academia have long known that their careers suffer more than those of their male counterparts when partnership and family comes into play, but a new book confirms it: The “baby penalty” has a negative effect on nearly every stage of women’s academic careers, while having children often enhances those of men. [Chronicle of Higher Education]

• People in prison will now have an easier time callling their families: prisons have been jacking up the cost of family phone calls for years, but the FCC has finally voted to step in and regulate the price of these calls. [Campaign for Prison Phone Justice, Twin Cities Daily Planet, h/t Victoria Law]

• This month’s Harper’s Bazaar features a portfolio dedicated to “The Diversity of Women.” Plus-size fashion blogger Nicolette Mason has some questions about what, exactly qualifies as “diverse” in fashion—and what’s just half-assed lip service. [Nicolette Mason]

• If you like American Horror Story and you like witches, you’re in luck: The third season of Ryan Murphy’s TV thriller will center on a coven of witches moving from Salem to Louisiana’s French Quarter. [AfterEllen] Relevant: Artist Lisa Hanawalt Talks Hot Dogs, Bojack Horseman, and Why It Helps to Give Anxiety a Name 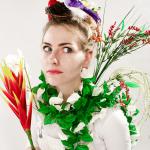 by Sarah Mirk
Welcome to the land of talking dogs and poop jokes. Oh and also sincere, vulnerable feelings.