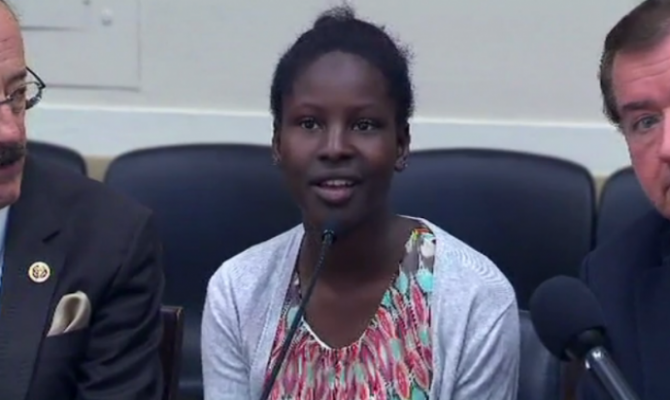 • A survivor of a Boko Haram attack in 2011 told her story to the US Congress and media this week. Deborah Peter (above), a 15 year-old girl from Nigeria held a paper sign reading “#BringBackMySisters” for the press to see as she recounted the horrific story of violence and her escape. [Time]

• Researchers now have evidence that drivers don’t treat all pedestrians equally: A study conducted through Portland State University and the University of Arizona found that “black pedestrians had to wait 32 percent longer than their white counterparts and were passed by double the amount of cars” before being allowed to cross the street at the busy crosswalk.  [Colorlines]

• Time to brace yourself for the election season absurdity. Georgia senatorial candidate Jody Hice clinched a spot in the July runoff election. Hice published a book in 2012 alleging that the gay community has a secret plot to recruit and sodomize children. Oh boy. [Mother Jones]

• A former cheerleader for the Tampa Bay Buccaneers sued the team, following in the footsteps of several other NFL cheerleaders who worked for the Bengals, Jets, and Bills. The various lawsuits allege a litany of grievances including being paid under minimum wage and being subjected to something called the “jiggle test.” [Mother Jones]

• Stay-at-home motherhood is on the rise among low-income families. According to Barbara Risman, a University of Illinois sociologist, more women are staying home with their children because, among other things, they aren’t able to earn more than the cost of their childcare. [Sociological Images]

• In a high-profile case of domestic violence this week, The Shield’s Michael Jace has been charged with shooting and killing his wife in their home Monday night. [The Guardian]

• The Louisiana state legislature thinks that surveying teenagers about whether they’ve ever had sex will make them have more sex. Rep. Lenar Whitney, wondered in a hearing on the topic, if simply being asked about sex would “desensitize” teens. [Slate]

• This week, the House of Representatives is hard at work marking up its version of the Healthy, Hunger-Free Kids Act, which sets funding levels for school lunch programs that extend into the summer. The House is attempting to change language in the bill so it serves only “rural” and not “urban” kids. [Slate]

I'll save you two clicks on the crosswalk race disparity story:
http://otrec.us/news/entry/study_examines_racial_bias_at_crosswalks