Here’s all the news on our radar today!

• Writer and activist Janet Mock explores the power of defining oneself in the trans* community in an interview with celebrity B. Scott of “Tyra Banks Show” fame. [Janet Mock]

• Female-driven stop motion studio Lift Animation has launched a Kickstarter campaign to support their upcoming film short, Henrietta Bulkowski. The studio hopes to make this the first of many feminist animation projects. [Kickstarter]

• Colorlines takes a moment to talk to featured artists from a recent Smithsonian Asian-Latino pop-up exhibition about how they’re changing the landscape of cultural representation in American art. [Colorlines] Relevant: Trump is Assembling an Anti-LGBTQ Cabinet of Horrors 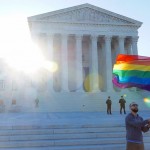 by Sarah Mirk
The homophobia and transphobia of his chosen top advisors needs to be seen—and stopped.