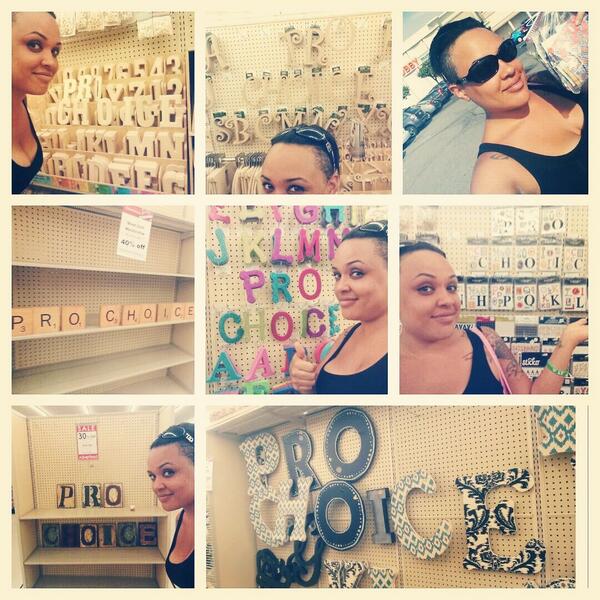 • Looking for a new hobby? Jasmine Shea went into her local Hobby Lobby and did a little rearranging. [Twitter]

• Writer Soraya Chemaly lays out the facts on how men take up more space and time in conversations and classrooms—but women are more likely to be seen as “hogging” time. [Role Reboot]

• What are the worst states for women? Crunching the numbers on how women fare economically in each state reveals that women are worse off in the South than elsewhere. [ThinkProgress]

• Speaking of making the country worse for women… states around the country have enacted 21 abortion restriction laws this year so far, which is actually fewer than in recent years. [RH Reality Check]

• The Singapore National Library is withdrawing two books because they deal with LGBT families in a positive way. [Yahoo, h/t to @annesobe]

• There’s no two ways about it: the press has always had a habit of shaming women for profit. [The Guardian]

• A Bitch contributor and a former Bitch design intern are launching the second issue of a rad feminism and food magazine: check out the fundraising campaign for Render. [Kickstarter]

My friend created this awesome campaign (https://www.booster.com/scotus) to support Planned Parenthood. Great idea where you get a super cool t-shirt AND the proceeds all go back to Planned Parenthood. However, they have to sell a ton of shirts by July 15 for it to happen. Please buy a shirt, post on FB, and message all your friends. Super easy way to funnel our outrage at the Supreme Court AND donate back to a great organization.

Using Hobby Lobby's supplies against them is pretty rad, until you realize it's those workers who are being denied birth control who are going to have to clean that mess up. Good photo op, but maybe straighten back to how it was so that you aren't putting extra work onto someone who already got dumped on by the Supreme Court.

Don't worry. Workers who have retail and food job are expected to be working constantly and always have a task to do. Re-arranging some letters on a shelf is probably one of the easier tasks their boss asks them to do. There's no extra work - they would be told to do something else if they didn't have to do that.

Have you worked in retail? I spent almost two years arranging products on shelves that customers had moved around. And yes, it's part of the job but there's a whole list of more important tasks that need to be finished by the end of the shift. Of course it's extra work and it's easy but that doesn't mean it isn't eating up the time you needed to order products, help customers, collect emails and finish the endless jobs that your supervisor has stacked in your queue. Cute pictures here, but is some important higher-up going to see this and be affected by it or is some minimum wage worker going to add just one more thing to their already extensive workload?

The "reason" women need birth control COVERAGE is because yes, you can buy some of this stuff over the counter, and it is EXPENSIVE! It is BASIC HEALTH CARE! Do not tell workers making minimum wage that they should have to pocket high expenses for basic health care.

like commenting on the internet? is that doing something that matters?