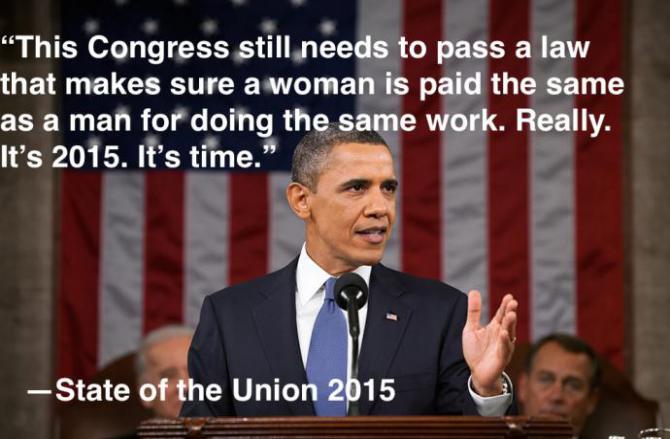 • President Obama explicitly called for ending the gendered wage gap during the State of the Union—and Republicans weren’t happy about it. [Huffington Post]

• Check out this chart analyzing the frequency of words used during the U.S President’s annual State of the Union address. [The Atlantic]

• It may be a while before you can own a copy of Laura Ingalls Wilder’s autobiography, Pioneer Girl—the small press that published it had not counted on the 45,000-plus copies ordered beyond its initial 15,000 print run. [Slate]

• Watch Larry Wilmore discuss the state of the black protest on The Nightly Show’s debut episode this past Monday. [Salon]

• Brittney Cooper lays out how race plays into criticism of Selma’s treatment of LBJ. [Salon]

• Paris mayor Anne Hidalgo plans to sue Fox News over their erroneous report that Paris has “no-go zones” where Muslims are not allowed. [Newsweek]

• And to top off your day, have you seen this Saturday Night Live skit that satirizes the gentrification of diverse neighborhoods? [Colorlines]