Happy Wednesday! Here’s what we’re reading up on today:

• Today in horrifying GOP opinions: Back in February, Republican nominee hopeful Mike Huckabee said he wished he “could have felt like a woman when it came time to take showers in PE.” [Mother Jones]

• Twenty-week abortion bans don’t actually decrease the number of abortions all that much, and that’s because “many of the women seeking abortions after 20 weeks of pregnancy are ending wanted pregnancies after discovering serious fetal abnormalities.” [ThinkProgress]

• The Truth and Reconciliation Committee in Canada concluded that the governmental policies that “removed aboriginal children from their homes, subjecting many of them to substandard education, malnutrition, abuse, illness, and even death” amounted to cultural genocide. [The Star]

• Bangladesh police have filed murder charges against 41 people accused of being tied to the collapse of the Rana Plaza building in 2013, which killed 1,100 garment factory workers and injured over 2,500 more. [Jezebel]

• Check out this great interview with actress/artist/DIY crafter/general Renaissance woman Jasika Nicole: “I think writing comics about my family is a way for me to process difficult things I have experienced in my life. Maybe it’s a step in the therapeutic process where I put everything down on paper.” [Autostraddle] 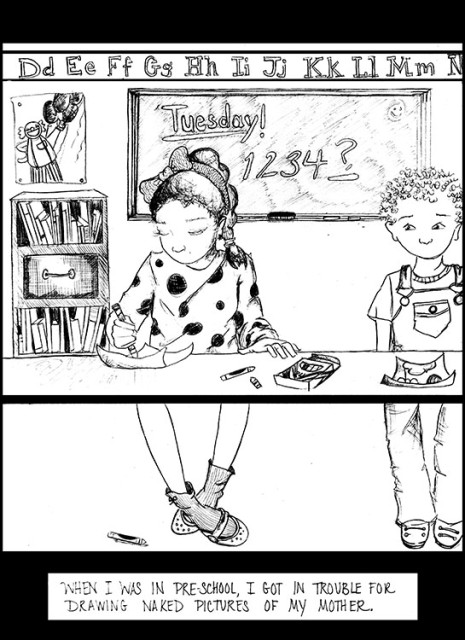 From “Crayon” by Jasika Nicole

Did we miss something? Let us know in the comments.

It was not just 'a science journal', but a the career advice page from 'Science', which in itself is one of the world's top scientific journals (in my field it's 'Science' and 'Nature' that rule. No Rule, with a capital 'r'). To me that made it extra painful as many young scientists go to the career age of this journal for guidance on how to work in this already quite flawed academic system. I've looked on their pages for advice and tips during my PhD and postdoc years, and knowing this came from Science (well, it's career website) made it extra disheartening.