Here’s the news on our radar today. • Many people are noting that Lily Allen’s new parody music video for “Hard Out Here” misses the mark when it comes to satire, writing that the video denigrates its back-up dancers and includes inherently racist connotations. [Black Feminists, Black in Asia, Ani Bundel]

• Great young adult author Malinda Lo talks about sexism and the difficulty of self-promotion. [The Toast]

• Salon argues that Sons of Anarchy is the most sexist show on television. [Salon]

• Why the abortion pill didn’t change everything. [New York Mag]

• One California High School’s mascot is the Arabs. Seriously? [Colorlines]

• What would happen if the Supreme Court didn’t defend abortion? It would become a health service only the privileged could afford. [RH Reality Check]

Good to know I'm not the only one who didn't take well to the Lily Allen video. The song is a treat, but the vid's a mess. Le sigh.

Read all about this unfortunate news <a href="http://splitsider.com/2013/11/fxx-cancels-totally-biased-with-w-kamau-be...

Suggestion: Petitions to get him back on the air, anyone? 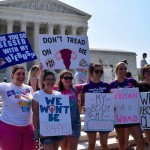