• On Tuesday, CBC aired a poignant interview with Joni Mitchell. The singer spoke about fame, her life as a painter, and giving her daughter up for adoption. [CBC]

• Controversial feminist Camille Paglia writes an ode to Joan Rivers, who recently turned eighty. Paglia argues that “what Joan represents is power of voice,” and that she “must be recognized as an iconic feminist role model.” [Hollywood Reporter]

• What are the stereotypes of women in politics? A study finds that the vast majority of people see women politicians as sharing almost none of the qualities of women more broadly. [National Journal]

• This quote says it all: “If we as a society have any interest in preventing mass shootings – crimes that seem so senseless, so unpredictable – we have got to look at domestic violence.” [The Stranger]

• Feminist blogger Anita Sarkeesian tweeted about the lack of female protagonists in the new Xbox One games, and the misogynistic backlash was, unfortunately, typical. [Huffington Post]

• On Friday, Iran will elect a new president: NPR profiles four Iranian women who are worried about rollbacks to their freedom under the new president. [NPR] 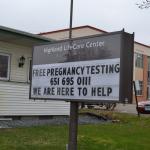 by kirstindaniellekelley
A new California law tries to stop misleading centers that refuse to discuss abortion from posing as licensed medical facilities.