Here’s all the feminist news we have for you this morning!

• Bradley Manning has been sentenced to 35 years in prison for giving files to WikiLeaks. He hoped that the documents he leaked would lead “society as a whole to come to the conclusion that wars weren’t worth it.” [Boing Boing]

• A disturbing new ad from the Coalition to Stop Gun Violence incorporates audio clips from the night of Trayvon Martin’s death to recreate the grim scene in an effort to resist gun violence and challenge the Stand Your Ground defense. [BuzzFeed]

• In a bizarre attempt to shut down abortion clinics, a billionaire-backed anti-abortion group urges lawyers to sue abortion providers by sending them an 11-minute DVD. [Mother Jones]

• Victim-blaming has once again gone viral: Photographs of a 17-year-old girl performing oral sex at a concert in Ireland emerged online, creating the slut-shamey hashtag #SlaneSlut while discussions of the men involved are nowhere to be found. [Jezebel]

• Looking at homophobia in the Tyler Perry soap opera “The Have and The Have Nots.” [Ebony]

• Phumzile Mlambo-Ngcuka, who served as the first woman to be Deputy President of South Africa, was sworn in on Monday as the Executive Director of UN Women. [AWID]

• Actor Mark Ruffalo advocates access to safe and legal abortion and shares how anti-choice restrictions have affected his family.[Stop Patriarchy]

• For the first time ever, women will make up half of all nominees in this year’s Emmys. [Ms.]

• In anticipation of the next season of “Orange Is The New Black,” Emily Niland created paper dolls of the show’s characters. [Colorlines] Pretty sad that Emily Niland felt the need to make all the women skinny. I mean neither Red nor Watson have a body that's identical to Chapman's. Other than that, thanks for a good round up, always the best place to be kept in the loop!

The fuck is this misnaming Chelsea Manning. 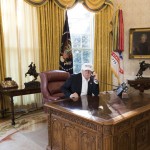 by Dahlia Balcazar
And he really hates working.