One Day, Two Comments About Good Looking Women in Politics

Today saw not one, but two politicians toss offhand comments about appearances at women involved in politics. One of those men is the chair of a South Carolina county’s Republican Party, which, well, no surprise. But the other is President Barack Obama. Obama! Step it up. “Everybody is really concerned,” said Jerry Hallman, chairman of South Carolina’s Beaufort County Republican Party, “because she’s not a bad-looking lady.” He also noted that she’s a “good speaker” and has “got some money.”

Hallman has plenty of reasons to be concerned, but Colbert Busch’s radiant smile should be the least of his concerns. He should be concerned because his candidate, Mark Sanford, is best known as the guy was censured by a state ethics commission for spending public money to go AWOL from office for a steamy romantic week in Argentina.  Oh, he also tried and failed to reject stimulus funds for his state. Winning!

Then this afternoon, Obama commented on the appearance of California Attorney General Kamala Harris. “She’s brilliant and she’s dedicated, she’s tough,” he said. “She also happens to be, by far, the best looking attorney general.”

Obama’s trying to be nice. He’s just making a lighthearted joke. But the comment is annoying because it adds another sand grain to the mountain of scrutiny that female leaders endure. When she’s ordering around lawyers in Sacramento, Harris shouldn’t have to be worried about the whether she’s looking good that day—Obama’s joke reveals that, yep, at the back of their mind, everyone in the room is really thinking about how her pantsuit looks.

Photo of Kamala Harris via Wikipedia.

I don't understand I guess. Don't people also talk about how male politicians look? I remember people talking about how ugly Cheney is and they couldn't stand to look at him, or how McCain looked like wax and like he was half dead and they didn't think they could look at him for 8 years. Or how handsome JFK was. And people have definitely talked about how good looking John Edwards is. ?? It seems like people make little comments about how everyone looks in politics, good or bad. Or am I missing something?

It's about the double-standard of how there is more societal emphasis on women being judged over than by men, despite the examples of good-looking, and/or ugly men that were just mentioned (I add one more ... Ryan Gosling). Examples: Kevin James and Seth Rogan get free passes for being overweight and not the most attractive looking, while Adele is fat-shamed by Joan Rivers, who obviously lives in a world where fat people die early deaths and the only healthy women are the thin, plastic-surgeoned, attractive ones. It's even worse when there are women in positions of power, getting there by the use of their brains instead of their bodies ... and STILL ... they are judged as good looking over their intellectual merits. As feminists we call this out because in our so-called "better" world, women and men (and trans, queers, etc.) have intellectual capabilities that should be encouraged and nurtured, and their bodies, looks-wise, are of miniscule importance of nurturing, other than being healthy on any sort of level. Oh, and what about Jon Hamm's penis? Please, enough on that ... 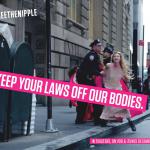