The One Key Question That All Doctors Should Ask | Bitch Media

The One Key Question That All Doctors Should Ask The Oregon Foundation for Reproductive Health is pushing primary care doctors to ask every woman one extra question when they see her for a regular checkup: “Do you want to become pregnant in the next year?”

Unlike the questions, “Are you sexually active?” or “Do you need birth control?” the wording of the question “Do you want to become pregnant in the next year?” allows a conversation to start with doctors and women who both do and do not want to become pregnant. For women who answer yes, doctors can give them preconception counseling and talk about staying healthy during pregnancy. For women who answer no, doctors can talk with them about contraceptive options.

The Oregon Foundation for Reproductive Health talked with doctors across the state and found that they rarely spoke about birth control with their patients. Many of them assumed that women were discussing birth control at women’s clinics, but in fact 72 percent of Oregon women get birth control through their primary care physicians. To get doctors to talk about birth control options more as regular part of checkups, the Portland-based healthcare nonprofit launched the “One Key Question” campaign this summer. The campaign recruits health centers to have all their primary care doctors incorporate that one question into their checkups. Oregon Foundation for Reproductive Health Policy and Access Coordinator Hannah Rosenau explains, “I believe in One Key Question because it brings reproductive health back into the conversation and it supports women in their choice whether they want to become pregnant or whether they want to prevent it.”

There is tremendous room for improvement in birth control—consistent with the national average, close to 50% of all pregnancies in Oregon are unintended. Of these, 70 percent of women who had unintended pregnancies implied that they lacked comprehensive contraception advice from a clinician. Of course, this one question won’t fix every hurdle to birth control access in the country. A big problem has been the cost of birth control, but the rollout of the Affordale Care Act should provide full coverage of birth control for millions of women.

Moving forward, it won’t matter whether the cost of birth control is covered by insurance if women who want it still aren’t discussing that option with their doctors. The One Key Question campaign aims to bridge the divide between women and doctors to get women the contraceptive healthcare they desire.

They should also be asking if the patient has a history of depression/anxiety/mentalhealth problems and make non-hormonal methods of birth control more accessible. I can get the pill for free, but it makes me suicidal (I've tried 5 different kinds, all of them making me manic or suicidal). The non-hormonal IUD would be perfect for me as I don't intend to have children for at least 5 years (even though I am married), but I can't afford it. Barrier methods just suck.

I agree Rachael! I think every girl on the day of her first period should get the book TAKING CHARGE OF YOUR FERTILITY. Ever doctor should know this information as well.

That book helped me get pregnant, but there is so much information that would have been great to have long before I was 30 and trying to get pregnant. If I had a daughter I would give it to her. If I ever have a daughter-in-law I certainly will. I have given it to several friends. It probably had an impact on my comfort with trying the Diva Cup. Awesome book.

Amen, Rachael. My doctors started me on birth control a few years ago for irregular periods and I had terrible problems with anxiety and depression -- had to stop taking them. Doctors still try to prescribe me various kinds for the same reason, but it's just not worth it.

my roommate, whose been married for 8 years, asked her gyn about iud's, cause all her friends (like me) are getting them. he said "they recommend that you don't get an iud if you've never been pregnant."

one time I asked a doc about the risk of bloodclots on the pill. she trotted off the "there is a risk, especially if you are over 30 and smoke" that they basically tell you on the box. I said "what if you have a history of clots nd strokes in your family? " she said "oh then there is more risk." I was like thanks for telling me exactly what I know about the pill and not give me any advice about whether it is worth it for me.

recently another friend was told, unprompted and without asking anything about her situation in life,, that now that she's 31 she should think about having children because it would only get harder.

I guess my point is doctors need to improve a lot on this regard.

There are options for payment for ParaGard (the copper, non-hormonal, 10-year IUD pictured in the article). Either contact your doc or contact ParaGard :) ~OB/GYN assistant extraordinaire

After a decade of relying primarily on condoms, I got my IUD earlier this year through Planned Parenthood.

When I went in for my consultation, my practitioner told me, "You're going to love it!" And she was right.

It turned out I have fibroids so I had to see a specialist for insertion, but otherwise it went without a hitch (except for the muttering, praying anti-abortion protesters outside the clinic afterwards who looked at me the way they'd look at a zoo animal or panhandler... that was one of the strangest things I have ever experienced). And because I was unemployed at the time I got it for free.

You do have a heavier period on it.... but mine also got a day shorter than it used to. First day barely spotting, second and third I have to have unlimited bathroom access. It is a little crampier to start out with... those cramps are hard to deal with if you haven't had much to speak of in a decade or so, but seven and a half months later I had my first cramp-free period since getting my IUD.

And I love it. I love not fiddling with condoms. I love not taking pills. I love not worrying about pregnancy. I love the peace of mind I have as a result of all these things. I feel free.

you can get a copper IUD from planned parenthood for free- or if you have insurance your company HAS to cover it! why don't you look into it again!

I heard about One Key Question because it helps to focus on preconception care too.... getting women who want to have a baby healthy before they get pregnant! It makes sense because it helps women avoid complications in their pregnancy and birth, and helps to have a healthier baby too.

It's a good idea to attempt an open conversation instead of only presumptuously "prescribe." But 1) the ideas of family planning and informed choice (let alone discussing it) come from a very particular version of feminism - white, middle class, going back to the 1970s and 2) if we were in any way to transform the culture into one of shared care and responsibility, men should also regularly be asked about their reproductive health and plans during annual check-ups - pre-conception health is relevant to men, as well as women, as are matters of contraception. Perhaps if those questions were routinely asked of men as well as women, we can transform a culture that generally places the moral responsibility of reproductive health onto women (it's part of WOMEN'S health, after all), while legislation of reproductive health is largely outside of women's hands - both of these are equally unjust and close off amazing opportunities for connection!

I would really appreciate some more information on family planning and informed choice being a white, middle class feminist issue. Do you have links to any resources discussing this?

Here are a couple resources on the topic:

1) Contemplating Maternity in an Era of Choice (http://www.amazon.com/Contemplating-Maternity-Era-Choice-Explorations/dp...) - the intro alone makes the case and reviews relevant literature + several of the chapters engage the issue in more depth

2) Governing the Female Body (http://www.amazon.com/Governing-Female-Body-Networks-ebook/dp/B003X4KCEE#_) - for a broader look on ideologies of choice in women's health movements in the U.S. 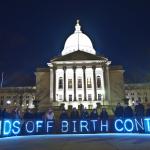 by Amelia Ayrelan Iuvino
The birth control case facing the Supreme Court could wind up rolling back civil rights protections of LGBT people, too.