The Massachusetts House voted 146-0 to ban the shackling of women giving birth and establish other minimum standards for pregnant women in jail and prison. The vote came just one week after the Senate’s unanimous endorsement of a similar bill. Both votes are historic: finally given the chance to vote on a bill that has languished in committee for years, every single member of the Legislature stood up for basic standards of decency. As Senator Linda Dorcena Forry said on the floor, “This bill will change lives.”

Governor Deval Patrick has already promised to sign the bill. “Regulation is good but here law would be better,” the governor said.

For a decade, the bill was introduced by a member of the Massachusetts House and assigned to the Judiciary Committee, from which it never emerged. This session, the bill was also introduced by a member of the Senate and assigned to the Public Safety Committee, which held a hearing in December and voted the bill out of committee on Friday, Feb. 14. Karen Spilka, sponsor of the Senate measure, said, “This bill is an important and necessary step toward improving reproductive health for female prisoners and ensuring safe, healthy outcomes for women and their babies.”

Many on the Public Safety Committee were surprised to learn about the harsh treatment of pregnant women in the state’s prison and jails. “Oftentimes until these things are brought to our attention we don’t necessarily have visibility on them,” Committee Co-Chair Rep. Harold P. Naughton Jr., said after the hearing in December. “There was an impressive presentation by the people opposing it.”

Advocates emphasize the medical risks created by shackling. “As hard as this is to believe, it is not unusual for pregnant women in Massachusetts jails to be handcuffed to the hospital bed even while in labor,” said Megan Amundson, the executive director of NARAL Pro-Choice Massachusetts.

Co-founder of the Prison Birth Project Marianne Bullock has worked as a doula and childbirth educator with more than 100 women in the regional women’s jail in Western Massachusetts. “Ending the practice of shackling and restraint of pregnant, laboring and postpartum women in Massachusetts will allow mothers throughout the commonwealth to give birth with dignity,” she said. Bullock’s comments on dignity highlight another theme of the advocacy campaign, besides safety: how inhumane it is to shackle pregnant women, especially when they are in labor, giving birth, and taking care of their newborn babies in the hospital.

Among numerous new safety rules, the bill absolutely bans restraints during labor and childbirth; bans leg irons and waist chains after the first trimester; and requires transportation in a vehicle with seat belts.

The bill also addresses the arbitrary treatment to which women are subjected, depending on where they happen to be arrested. “It is absurd that each prison or jail in the Commonwealth has its own policies on whether, when, and how they shackle pregnant women,” said Gavi Wolfe, Legislative Counsel for the ACLU of Massachusetts.

The newest version of the bill, which will combine the slightly different versions passed by the House and Senate, has not yet been published by the clerk’s office. Now that the bill has cleared some major hurdles, advocates are building on the momentum to shepherd the bill through the rest of the legislative process. People can show their support by signing a petition here.

This is an edited version of an article originally published by Rachel Roth on MomsRising.org.

Relevant: Your “Orange Is the New Black” Reading List 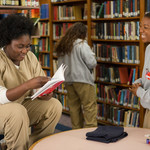 by Victoria Law
Netflix’s most-watched series was inspired by Piper Kerman’s memoir, but that’s not the only book about women’s incarceration.