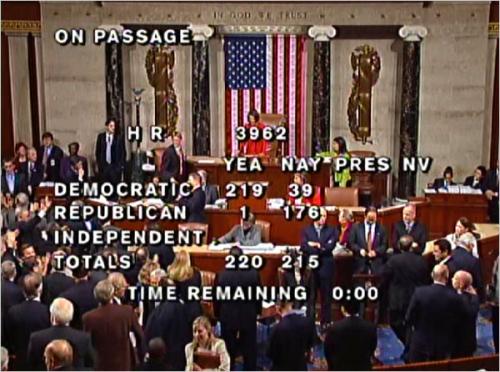 Included in the bill was an amendment from Bart Stupak (D-MI), which “prohibits federal funds for abortion services in the public option.” Women seeking insurance coverage for abortions must seek a plan outside the enrolled companies. Sixty-Four Democrats
voted to include the amendment.

While the bill is heralded as the biggest step in health care reform since the New Deal, the Stupak amendment serves as a monumental setback for reproductive justice.

Read on for thoughts from other bloggers, but please share your thoughts on the bill, the amendment, and the future of health care below.

I remember the days of back alley abortions and this amendment takes us one step back to those dark days. This amendment goes way beyond the Hyde Amendment that denies federal funds for abortion and attempts to dictate to women how to spend their own money. It’s simply outrageous.

This amendment will do nothing to reduce the abortion rate, but it will increase the suffering of women seeking abortion. The real goal is and always will be punishing sexual women, at least scapegoating the ones who have the misfortune to have unintended pregnancies.

The health care reform bill vote brought those in power closer to denying those in need the secure, affordable care that is our right. It was also a demonstration of how real progressive change is never made on the backs of the oppressed.

Even after last year’s election, many politicians still think that the old formula of saying one thing to women’s faces then doing a different thing when it comes time to vote…after we work our asses off to get them elected so that they could TAKE A MOTHERFUCKING STAND when it counted…would be enough to keep everyone happy.

Now, they’re about to learn a lesson…because women intend to make it crystal clear: the old rules have changed – and we will not be ignored.

If nothing else happens as a result of this defeat, complete and total dedication to overturning Hyde must be the centerpiece, indeed the single objective of our movement. It is not clear if the effect of the Stupak Amendment will be that the door will close on ever restoring federal funds for abortion, but every effort to make sure that does not happen must be made. We must convince enough people that the only immorality is using poor women as a way of expressing one’s moral outrage. Either we all have the right to choose or none of us has it.

President Obama has always supported overturning Hyde and we now need to insist that having achieved his political objective with strong support from the women’s movement, he must take up the true moral cause – giving women with no or low resources the same right of conscience as those with sufficient money to pay for their own abortions have always had.

This vote is a reminder to America’s pro-choice majority that, despite our gains in the last two election cycles, anti-choice members of Congress still outnumber our pro-choice allies. It is unconscionable that anti-choice lawmakers would use health reform to attack women’s health and privacy, but that’s exactly what happened on the House floor tonight. Even though the bill already included a ban on federal funding for abortion and a requirement that only women’s personal funds could pay for abortion care, Reps. Stupak and Pitts took their obsession with attacking a woman’s right to choose to a whole new level. We will hold those lawmakers who sided with the extreme Stupak-Pitts amendment accountable for abandoning women and capitulating to the most extreme fringe of the anti-choice movement. In short, the fight is not over. That’s why we will continue to mobilize our activists and work with our allies in Congress to remove this dangerous provision from the health-care bill and stop additional attacks as the process moves to the Senate.

What do you suppose would happen with the anti-choice, anti-woman Stupak amendment if we had gender equality in Congress for this vote? I dare to say that not only would it be defeated—it wouldn’t have even a whisper of a wish of passing. (That is, if it was even introduced at all).

I was already thinking this was banned, federal funding for abortions, but it must have been the Hyde Amendment I was thinking about. I have nothing to add that hasn't already been said, just that I don't understand how people can still reason that restricting abortion was ever okay. Part of allowing women to be equal in this society is returning control of our bodies and sexualities back to us, but I guess it's really no surprise that people would like to restrict that. Really ridiculous.

I think it's pretty ridiculous that the reason this bill was passed was to make the Catholic lobby happy. The politicians we vote into office are supposed to be representing their constituents, not religious lobbying groups. This is a terrible setback for the pro-choice movement, and I'm very disappointed with how this "compromise" was settled.

I'm sorry, reproductive rights doesn't mean the government has to fund it. Does the government in turn fund or pay for any portion of a lesbian couple wishing to have invitro fertilization, hell no it doesn't! Abortion is a right to exercise, not an entitlement and I wish we could have more rational thinking when it comes to this issue. There was no end to the support for the serial aboritionist and her memoir, with almost no mention that she was the one that willingly stayed with her husband and skipped her BC methods in order to get pregnant. That's an abuse that makes it that much harder for legitimate needs to be taken seriously by moderates and those on the fence. You'll never convince the hardliner opposition by pontificating!

First, our government wouldn't be paying for abortion under the Hyde Amendment. That's only part of the issue here.

The Stupak Amendment brings even more restrictions to the table.

Second, I highly doubt that these restrictions would apply to anyone receiving tax subsidies and/or participating in the public health insurance exchange from using their own money to purchase insurance that covered in vitro fertilization or other fertility treatments (and I tried to check to confirm those doubts, but the bill is slow to load - so if anyone knows . . . ).

there is a difference in covering in-vitro versus an abortion. if someone wishes to have in-vitro, there is no pressing medical situation. if that couple does nothing, they will go on as normal; healthy, childless adults. if a woman is wanting an abortion, well, she is pregnant; *some* kind of medical care is going to happen. if she gets her insurance from the government, they are going to be footing the bill for her actions either way.

a woman would have to have at least 10 abortions to equal the cost of merely birthing the child, and that's if she's at the cheapest end of the likely cost spectrum. figure in about 12 prenatal visits and at least three follow-ups at $100-$150 a pop. and then, seeing as this new mother is surely not getting any richer, add a whole new person -- including a few well-visits a year, a slew of vaccines, and probably sick visits at least 2-4 times year -- to the list of costs.

it's a legal medical procedure, a woman has the right to make her own decisions as to what is the best medical care for her, and as far as the government footing the bill, it's the better option financially for them by far. now we can all see that it would be absurd to force a woman to terminate her pregnancy because it's cheaper, but since it *is* infinitely cheaper than the alternative, what on earth is the logic behind forcing her to keep it?

There has never been and never will be a coherent argument that will convince folks they should dole out tax dollars to pay for it.

Federal dollars are your dollars and putting an absolute stop to this option, for a woman to be individually evaluated and her case evaluated speaks directly to my problem with America adopting "universal" health care. Why can't I check a box and have my money go to supporting abortion options for the poorest amongst us (the Senators daughters, trust me, they're covered)...

IF the system were in a better place, where its own level of bureaucratic health were not deeply at issue, then I might be in for this concession in legislation. However, if the beginning of this endeavor starts with the dehumanizing principles of a one size fits all solution, then I am warning us all, it's not going to be what you think it is. It won't be England's system and it won't be France's, enacted when governments were still a little smaller, media wasn't as dominant and corporations weren't already controlling the State.

Women, people, start thinking for yourselves and not like you're being told to; you're not equal, you don't hold major positions of power and your religions and your politicians won't serve you until you begin to serve yourselves. Just because a man has been marginalized doesn't mean he won't marginalize you, I haven't heard of anyone picking up alliance politics in ages. Apparently it got burnt along with the forests, dried up like the rivers in California.

We need to move forward, because ultimately, we lost this one and we lost it because of polarizing ideologies, none of which are interested in our welfare or in the bigger picture of education, tolerance and compassion for the individual, not a one size fits all.

The bill still needs to be passed through the senate and can be amended so keep fighting! Launch emails to Jeff Merkley and Ron Wyden ASAP (if you're from Oregon) and get this sorted out!

<a href="http://crooksandliars.com/susie-madrak/bart-stupak-get-democratic-primar... Connie Saltonstall</a> Who will be challenging Stupak in an upcoming primary election.

<a href="http://www.actblue.com/page/blueamerica10">Please consider helping out her campaign</a> in any way, particularly with $$. As we know all-too-well, pro-choice candidates are disproportionately under-funded while anti-choice candidates have easy access to ca$h at their every turn.

With all the shouting going on about <a href="http://www.dailyfitnesstips4u.com/">daily fitness</a> care crisis, many are probably finding it difficult to concentrate, much less understand the cause of the problems confronting us. 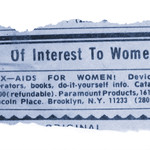