New Documentary "Out in the Night" Asks: Who Has the Right to Self Defense? | Bitch Media

New Documentary “Out in the Night” Asks: Who Has the Right to Self Defense? 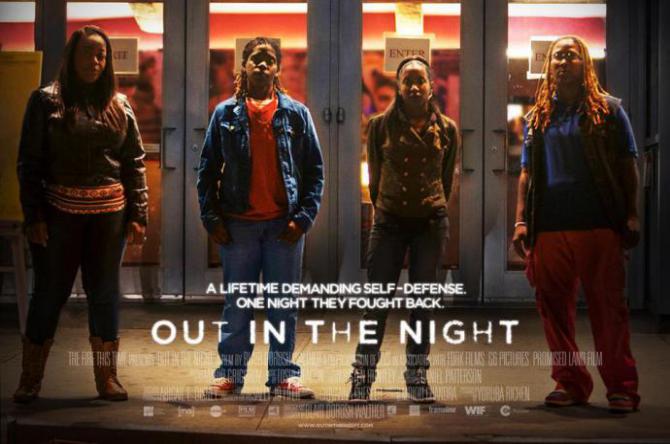 Who has the right to self-defense? How do race, class, sexuality, and gender expression affect what our society sees as violent? In 75 minutes, new documentary Out in the Night challenges us to consider these questions.

The film follows the case of Venice Brown, Terrain Dandridge, Renata Hill and Patreese Johnson, four women who became known as the New Jersey Four after they defended themselves against an assault on the streets of New York City’s West Village.

On August 18, 2006, seven young black lesbians friends from Newark, New Jersey, came to New York City’s West Village. As they walked down the street, they were harassed by a man named Duane Buckle. When they told him they were gay, he began threatening to rape them—then he physically attacking them, throwing his lit cigarette at them, ripping the hair from one woman’s head, and choking another woman. The women defended themselves and, at some point during the four-minute fight, two unknown men jumped in to assist them. As Buckle attempted to choke Renata Hill, Patreese Johnson stabbed him with a pen knife. The two unknown men left the scene, but when police arrived, they arrested the women. Buckle was taken to the hospital where he stated that men had attacked him. Nonetheless, the women were charged with assault and attempted murder.

Both the media and the prosecution framed the women as a “lesbian wolf pack,” “killer lesbians” and a “seething sapphic septet“ who had attacked Buckle because he was straight. 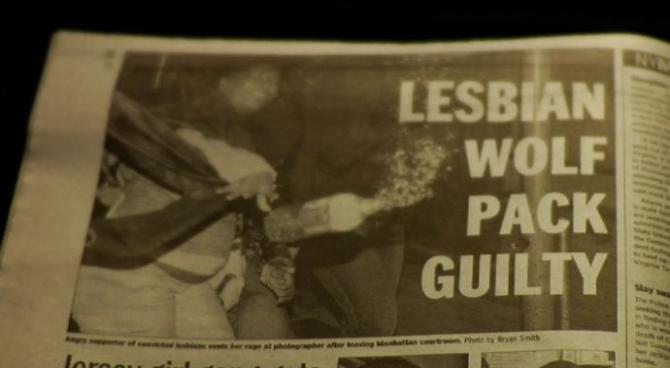 The New York Daily News headline following the convictions. Image via Out in the Night’s Kickstarter.

Media and prosecution also played on racialized fears of gang violence: although none of the women had ever been in conflict with the law, media and prosecutors described them as a “gang.” In the courtroom, neither the judge nor the prosecutor differentiated between the charge of “gang assault” (two or more people acting in concert to cause injury) and actual gang membership. Three of the women accepted plea bargains and served six months; the remaining four fought the charges. They were convicted and received sentences ranging from three-and-a-half to 11 years in prison.

But Out in the Night, which crowdfunded its production budget and is now currently screening at film festivals, isn’t just a recap of what happened that night, the ensuing media sensationalism, and the women’s legal cases. Weaving in interviews with family members, attorneys, police officers, and the women themselves, filmmaker blair dorosh-walther paints a complex picture which also looks at race, class, sexual orientation, and gender expression. “I initially was going to focus on self-defense for women,” says dorosh-walther. “Then it became about the media analysis—why they were labeled the way they were. As I continued shooting, it became more and more about the women and talking about these issues through them.”

The film counters these one-dimensional headlines, humanizing the four women by delving into their lives, families, and communities. We see all four women at a birthday party surrounded by family members of all ages. Patreese’s brother Anthony notes that, for many of them, their great-grandmothers or grandmothers originally bought the house in which generations have grown up. But, while Newark was home to generations, streets still held the threat of violence. Anthony recalls urging his sister to carry a knife for her own protection.

Anthony and his sister Tanisha recount Patreese coming out to their family. For Patreese’s family—and for the families of the other women—their sexual orientation was no big deal, but not everyone on the streets of Newark was as accepting. Walking down the streets of Newark as a masculine-appearing lesbian drew whispers if not threats of (or actual) violence. The West Village, with its reputation as a destination for gay people, seemed like a safe haven.

“I wanted to go to the Village cuz it’s nothing but gay people,” Renata stated early in the film. “We thought we wouldn’t have a problem if we went to New York. We could just be ourselves,” she recalled. But, interjects Terrain, the Village is where violence—both interpersonal and state—happened to them.

The film follows the women and their family members as they serve their prison sentences. In doing so, Out in the Night subtly but deftly includes information about the effects of incarceration, from the policing of gender behavior to prison’s impact on family members. Behind bars, Renata reveals ways in which the prison system polices gender. Even the underwear incarcerated people wear is tightly controlled. “I miss having boxers,” she tells the camera frankly. “These panties are killing me.” 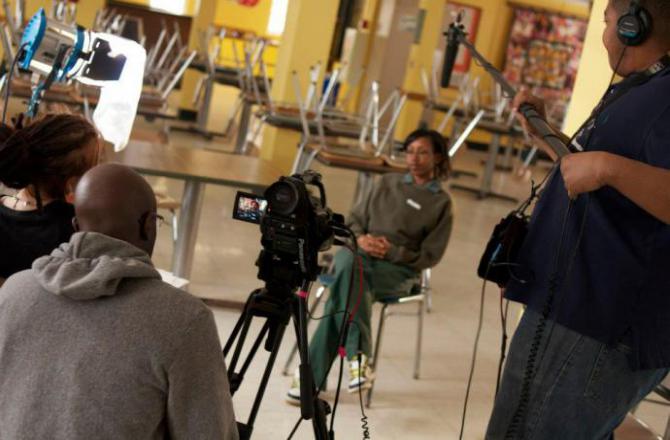 Patreese Johnson being interviewed by blair doroshwalther, with Daniel Patterson behind the camera, at Albion Correctional Facility. Image by Scott Gracheff, photo via Facebook.

The film also shows how incarceration disrupts family ties. The film follows Terrain’s mother as she leaves her home in Newark to catch the 9:30 pm bus at Columbus Circle to travel 371 miles to Albion Correctional Facility, 48 miles from the Canadian border. She takes this overnight bus ride every other week to spend a few hours with her daughter.

Distance is only one way in which incarceration attempts to sever family connections. Renata’s son was five years old when she was arrested in 2006. While in prison, she attempted to call her son and learned that the State of New Jersey had taken custody of her him. She was no longer allowed to speak with him and was not granted permission to see him until 2009. In another phone call home, Renata learned of her mother’s death. She was not allowed to attend the funeral. Less than a year before her release, Patreese’s brother Anthony (interviewed throughout the documentary) was shot and killed in front of his own house.

“Self-defense will never work if we’re not considering the entire context and what people have gone through,” stated dorosh-walther, noting that their prosecution—and mainstream media treatment—often ignored the women’s multiple identities. “They’re no less black than they are lesbian, gender non-conforming, working class or poor. Their case is the perfect storm of injustice. But we need to figure out how to write about these intersectionalities.”

Out in the Night ends with as Patreese Johnson, the last of the four women to be released, walks away from the prison and into the arms of her waiting sister. But, while Patreese, Renata, Terrain and Venice are out of prison, countless other women with similar stories remain behind prison walls. Out in the Night challenges viewers to care about their stories–and then to take action.

The film challenges viewers to think about their experiences. Hopefully it will also challenge them to take action as well.

I am appalled at the violence visited upon them. First by Buckle and by government.

You own you. I own me. The most fundamental human right is to enjoy one's peaceful, productive individual liberty safe from attack on one's person and justly acquired private property. To live in fear of violence NO MATTER WHO one is, violates one's self-ownership. Self-defense against unjustified violence is an inalienable human right. To deny that right upon any specious grounds whatsoever ... by gender or orientation, by race or creed ... makes a mockery of the self-ownership that is the foundation of individual liberty.

I will speak on this among my friends and do what (little) I can to redress this injustice. Dare to Struggle. Dare to Win.