“Outlander” is the Rare Show Where Women Aren't an Afterthought

There’s just something about Outlander. When the Starz original show based on the popular series by Diana Gabaldon premiered last August, it became the most popular series opener the channel had ever had. It was such a big debut, Starz immediately ordered a second season. The show’s TV ratings increased steadily during the first half of the season—the second half of the season begins on Saturday and it looks to be a hit.

The show’s popularity lies in its overlapping genres of historical fiction, romance, fantasy, and military history. But it’s also because this show’s story is written by a woman around and centers on a complex, compelling female protagonist woman. Claire Randall (played by Caitriona Balfe on the show) holds the complicated plot together: she’s a WWII nurse who falls back in time to Scotland in 1743. Claire finds herself out of time and place, dangerously dropped into the middle of a Scottish rebellion. She immediately comes into contact with an ancestor of her husband’s, the cruel English soldier Black Jack Randall, and he tries to rape her. Claire escapes but soon finds herself kidnapped by a tribe of Scottish highlanders, where she befriends the young and beautiful Jamie Fraser. The story then becomes a mix of Claire surviving while trying to find a way back to 1945 and her husband Frank, the highlanders’ tensions with the English, and a love story between Claire and Jamie that culminates when they are forced to marry to help protect Claire from Black Jack Randall. The final episode of the first half of the season ended with Frank’s desperate but fruitless search for Claire, and Claire nearly being raped again by Randall before Jamie bursts into the room to save her. 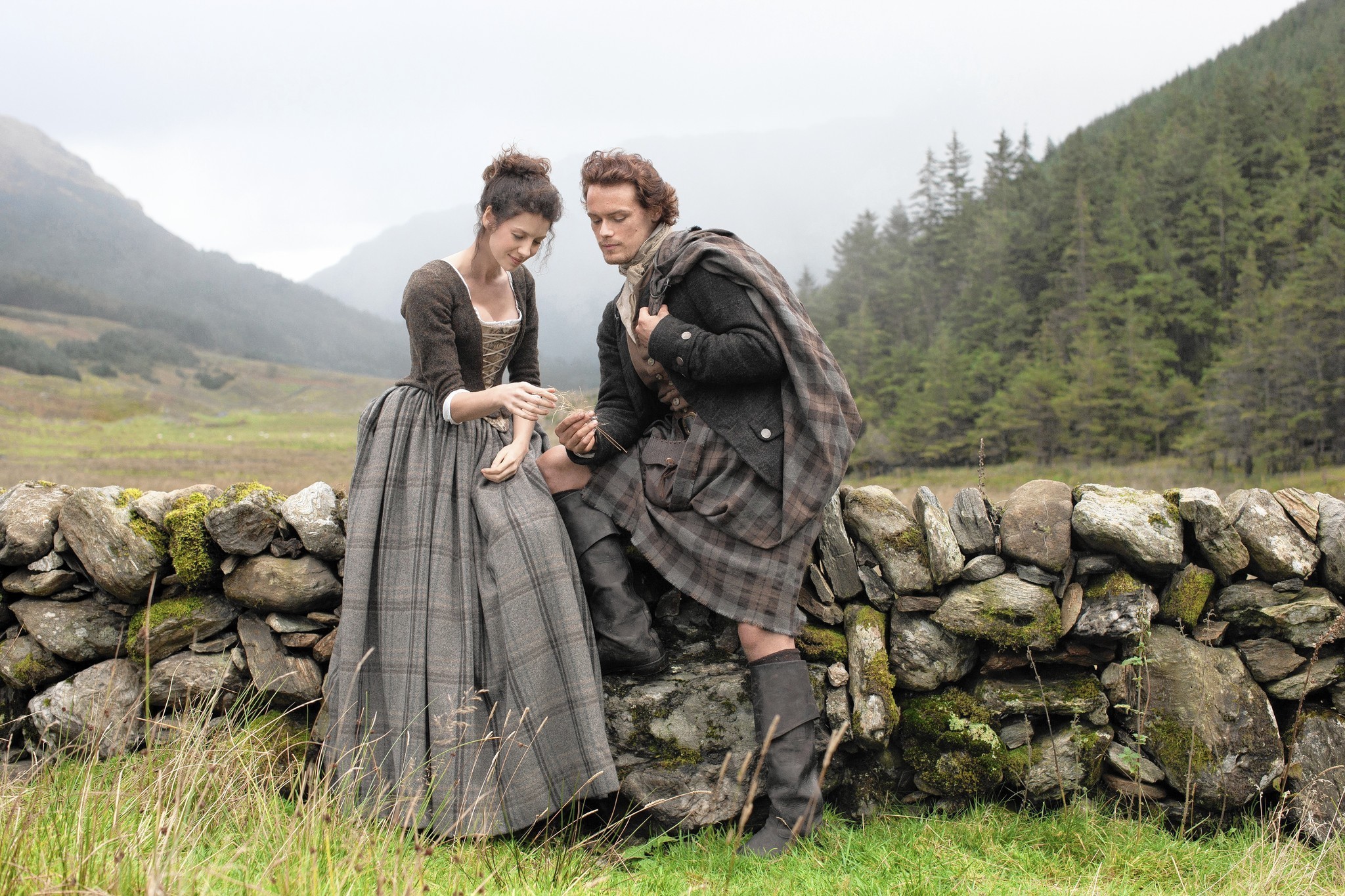 Perhaps you sense a theme on the show: the prevalence of sexual violence. It is an undeniable part of the narrative in the way that the violence of war is in real life. As Emily Nussbaum recently argued in a great piece on the new Netflix show The Unbreakable Kimmy Schmidt, when you center women in stories and when their “lives are taken seriously, sexual violence is going to be part of the drama.” Sexual violence is always present in times of war but is often absent in depictions of war on screen. Not so with Outlander. Julianne Ross at Mic named a scene from the show as “the most feminist moment on television” last year because when the laird of a Scottish clan asks Claire about that first encounter with Randall where he tries to rape her. The man can’t believe it, saying to her, “You’re saying that a man bearing the King’s Commission decided to rape a stray lady traveler he came upon in the woods, for no good reason?” Claire responds, “Is there ever a good reason for rape, Master MacKenzie?” Unlike Game of Thrones (to which Outlander is often compared), the show uses sexual violence as part of its story, without just throwing it in for shock value.

At the same time, and importantly so, the show is sexy and shows scenes of hot, consensual sex. The very first episode includes a sexy scene of Claire and Frank exploring an old Scottish castle. With Claire sitting on top of a table, Frank goes down on her and we watch her get off on the pleasure. Frank is barely visible in the shot. Executive producer Ron Moore says the scene was included “to show Claire as empowered sexually as a person and having her own appetites and desires.” If you’ve ever talked to anyone who likes Outlander about the show, the odds of them bringing up the seventh episode of the series, the wedding episode, is basically 99 percent. The reason for this is that this entire episode—written by a woman, Anna Foerster, and directed by another woman, Anne Kenney—is about Claire and Jamie when they are newlyweds and virtual strangers, learning each other as people and eventually as lovers. Writer Jenny Trout, in an essay where she argues persuasively that “Outlander is a drama crafted for the straight female gaze,” says it best:

“Fans were treated to an entire episode devoted solely to watching the new couple enthusiastically consummate their marriage. Mixed in with the candles and teasing glimpses of naked flesh, there was genuine caring on the part of the groom, who had no desire to take his reluctant bride by force.”

It is Claire who is not the virgin in this pairing and who becomes the instructor after Jamie fumbles through sex the first time. Maureen Ryan captures it: “People, especially women, felt seen and recognized by this hour of television.”

So much of the show rides on the character of Claire. That’s good. Despite finding herself in moments of peril repeatedly, Claire is a gutsy and capable person who refuses to let the patriarchy of 1743 boss her around. As Rebecca Jane Stokes described the character from the book series (in a post looking forward to the show), Claire “has no time for fools or misogyny. Granted, this occasionally means people try to kill her and maybe some folks think she’s a witch, but that comes with the territory.” This spirit is captured well in the show.

It will be interesting to see how all of these parts of the show work in the next eight episodes. Typically, Claire reads voiceover text in the show, illuminating her perspective, but episode nine will be the first time that Jamie does the voiceover instead. Producer Ron Moore told Hitfix this is purposeful because the show’s creators saw “an opportunity to shift point of view for an episode and try something new.” Things will happen to Jamie in the upcoming episodes when Claire is not there and, Moore says, by setting up this new framework where Jamie can narrate the action, “I can start cutting to Jamie and see what’s happening in his life, even though Claire wasn’t technically in those scenes.” As we will soon see, violence, including sexual violence, will continue to be part of this story. It matters that Jamie be able to tell his story. Let us hope, though, that the female gaze we have been so fortunate to witness in the first eight episodes continues to guide us through most of the next eight and beyond.

Related Reading: Can We Talk About those Rape Scenes in Outlander?

If you think women aren't an after thought in the show, you really should read the books. The women shine in Diana Gabaldon's creation.

Great piece, and I love the series! One correction, though. You got the episode 7 writer and director mixed up. It was directed by Anna Foerster and written by Anne Kenney. :-)