Today marks the end of my time as a guest blogger for Bitch. Eight weeks and 24 posts later, I’ve learned a lot from the editors (thank you, Kelsey!) and readers about writing and politics. And the politics of writing. Rather than end off by talking specifically about a particular topic at the intersection of youth, sexuality, and education, I want to reflect on the nature of doing analytical writing at this political nexus.

I’ve been struck by the paradoxes of writing for the blogosphere. In a place where it’s possible to publish instantaneously, producing new content quickly has become a norm. On the upside, this has taught me a lot about thinking fast. It’s asked me to try different authorial voices and I’ve discovered which writing voice feels the truest to me. It’s also encouraged me to keep more up to date with what’s going on at the intersections of sexuality and education. But fast turnaround times can mean unpolished, un-vetted writing. The point of a lot of online writing is that material is supposed to be conversational, not cumbersome and full of research citations, but this can mean that the quality of analysis of complex political issues suffers. All of this means trying to strike a tricky balance and risking the ire of some readers.

Because of exactly the same speed and immediacy that allows me to enjoy other peoples’ work and post a new piece three times a week, readers can offer their thoughts with the same speed. On one hand, I feel like I’ve connected with people I never would have otherwise e-met (@Margarite Von Diter, my email’s on the site—let’s keep in touch!). On the other hand, I have seen a disheartening amount of horizontal hostility (to borrow a phrase I heard at the TransPULSE session I reported on the other day) in the blogosphere. It’s possible to post ungenerous responses with few consequences. This has been illuminating as I’ve followed the public conversations around LGBTQ* youth and bullying. As a writer, you can try to engage a dialogue to reach some kind of shared understanding, or at least try to get onto the same page enough to respectfully agree to disagree, but online anonymity means your efforts can be ignored, and all of your words—whether recanted, rethought, or not—are still floating out there, dead letters. It appears that to some, a blogger is just an algorithm that adds to the endless stream of information bombarding them every day. Ironically, we’re clearly all too human; people working out their own flaws, blindspots, and misunderstandings, with feelings and lives that are likewise cluttered with the same barrage of constant content. For proof: Putting a face to a farewell—me and one of the blond ladies in my life. The other is behind the camera.

For further proof, I want to acknowledge how lucky I am to have thoughtful friends and readers who have shared a lot of wisdom with me. They’ve pointed out that once you decide to become an online presence, you’ve already accepted the possibility that you might be misunderstood, and that accomplishing anything usually does involve provoking people, to some extent. They’ve shared their own experiences and thoughts with amazing candor impressive storytelling. This kind of sharing has been more rewarding than I could have expected.

I chose this theme of “youth, education, and sexuality” in order to pitch something the editors would go for as well as to give myself as much topical latitude as possible—while still having something to anchor my writing from week to week. In retrospect, I’m glad of having chosen the theme because I’ve gotten to read reflections from high school-aged readers as well as much older readers on subjects where intergenerational perspectives lend a lot of clarity. As a young queer person whose past and future both seem to lie in education and research, this is also a theme about which I’m genuinely passionate. (Speaking of which, here’s a link for LGBTQ* readers from Ontario universities to participate in a survey about the on-campus experiences of sexual minority students, faculty, and staff). Over the past several weeks, however, for a number of reasons pertaining to my life online and off, I have seriously questioned the point of doing the work I try do. I’ve found myself all too susceptible to a common bias that causes us to remember more of the bad than the good, leading us to perceive the challenges as outweighing the possibilities. But I’ve emerged from that period of questioning with renewed faith in “the point of it all.”

What I hope is that this guest blog produced some ideas that were helpful to some people, whether to use, or think about, or refute. The experience of writing and moderating it has taught me a lot about doing political work in online communities. The overwhelming sense that I take away from this experience is that the work of really listening to others—not just “including” them or “critiquing” them by turns—is a project that only ever grows in complexity, and that its hard questions are well served by keeping a spirit of generosity alive for ourselves and others.

Thanks to the folks at Bitch for the opportunity and thanks for reading!

Really loved reading your series, Sharday. You have such an insightful perspective on these issues. I hope to read you elsewhere on the Internet!

What carrienelson said. :) I've really enjoyed your posts and I would love to keep in touch, thanks! Best wishes to you in whatever you do next.

Sad to see you go. I really enjoyed the few posts of yours I read and now you've inspired me to go back and read the others. Thank you for sharing your wonderful insights with us! 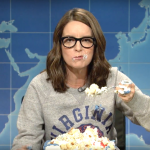