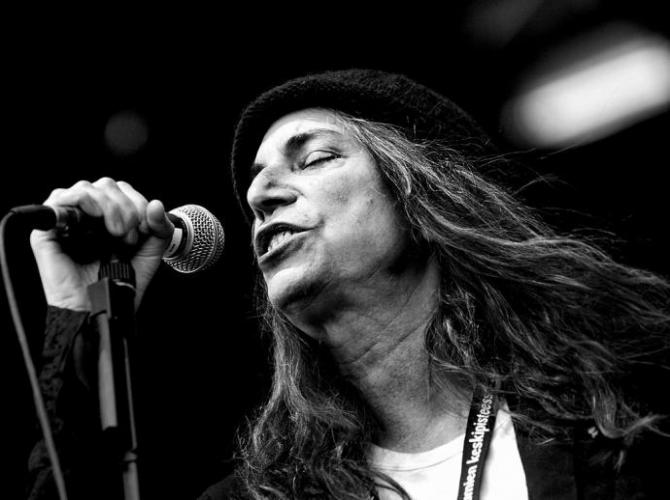 Forty years after the release of her ground-breaking album Horses, Patti Smith is back on touring. The iconic singer, songwriter, and poet is touring the West Coast and Europe for her record, Banga.

Looking back on Patti Smith’s recent show at the Crystal Ballroom in Portland, Oregon, I am still struck by her sincerity, her unabashed, risk-taking lyrics, and her incomparable ability to create atmosphere the moment she walks onstage with arms wide open. Horses came out long before I was born and this was the first time I had gotten to see the legend perform. While I truly enjoyed Smith’s energy live, the politics behind some of her songs felt jarringly dated.

In her live show, Smith is somehow familiar and comforting despite her fame. Her banter with the audience covered everything from how she spend the afternoon eating cheese grits at a diner, to her love for television (she is currently obsessed with Little House on the Prairie), to her thoughts on H.P. Lovecraft.  Smith, hailed as Godmother of Punk, writer, visual artist, and activist continues to provoke critical thought and emotional response from her audience. Patti Smith has recorded 11 studio albums, vocalized her anti-war views and support for the Green Party, had a brief cameo in Jean-Luc Goddard’s Film Socialisme, collected some honorary degrees from Rowan University and the Pratt Institute, and won the National Book Award for her memoir Just Kids. While she still often plays hit music written decades ago, much of her work is as fresh as ever.

In 2012, Smith released Banga,  a truly peculiar album which includes covers, ballads, and elegies. Somewhat lacking on Banga are Smith’s classic freeform songwriting and composition, yet an affinity towards the mythic, historical, and personal remains. On “Constantine’s Dream” Smith shifts naturally between singing and spoken word, delving into a swirling underworld of discovery and erratic guitars. Backed by a four-piece band (which includes longtime guitarist Lenny Kaye), the setup is relatively simple, emphasizing Smith’s poetic lyrics. Between songs at her recent show, Smith was completely at ease, a magnetic figure onstage with her long silver hair and trademark Ann Demeulemeester black jacket. As I listened to “This is the Girl,” an elegy for Amy Winehouse, I realized the rarity of an artist like Patti Smith. Avoiding cliché and too much sentimentality are traits of a good writer, but through all her, Smith’s voice remains the core of her sound. She sings as a poet, emphasizing all the right syllables and engaging with words in a way that ebbs and flows just enough to surprise and tantalize listeners while striking some thought provoking chords.  Even on the banjo-propelled cover of Nirvana’s “Smells like Teen Spirit” (released on Twelve) Smith finds was to make the old new again with a poetic interlude.

While Smith is a great performer, writer, and activist in many ways, some moments of the concert felt out-of-touch. While performing “Gandhi” from Trampin’, a song largely about global environmental and social crises, Smith breaks into a poetic interlude and eventually cries out, “Gandhi isn’t a person, it’s an idea!” This song, which I was surprised to learn was released in 2004, bothers me less for its melodrama and more for it’s appropriation of Gandhi as an object on which Smith can impose her own political agenda. Unfortunately this wasn’t the only cringe-worthy aspect of the show, as Smith closed out the show wither “Rock n Roll N*****” off her 1978 release, Easter. Many condemn Smith, a white woman, for her self-identification as a racial epithet and the deeply problematic appropriation of black culture for the sake of her own self-expression. While certain counter arguments suggest Smith is continuing  Norman Mailer’s idea of the “white negro” and therefore her use of the n-word is acceptable, it certainly felt awkward to be at a concert hall full of a predominantly white audience singing along to the song by shouting “n*****” eleven times in a row. Within these songs, Smith’s lyrics make little to no reference to her own privilege in her ability to adopt certain people and language for her own artistic means.

Sometimes musicians say or do problematic things, and while we cannot ignore what is sexist, homophobic, transphobic, or in this case, racist, it is possible to like problematic things. Here is a resource I find useful from the social justice league.

While Patti Smith remains an engaging performer and adept lyricist, she is not without flaw and has every opportunity to critically examine her work (no matter what decade it was written) and to critically engage with her own identity in relation to the identities of others. Smith’s Banga shows a fascinating, modern addition to Smith’s discography while her live performance left something to be desired.

The intent behind the song is that the offensive word was to be made inoffensive by outsiders everywhere adopting it as a badge of honor. "You, we're all rock 'n roll niggers," as she sang in a bootleg version I have. It's the same process that gay people used with the word "Queer."

I still have my "R 'N' R Nigger" button that I purchased in '78, and still wear it proudly. I am a nigger, outside of society.

<p>I can never miss this, I love this song so much. the lyrics are so beautiful

After a very long time nice to see him again on tours.

<p>The point of the song is to create a sense of connectedness between all people who feel they are labeled and subject to name calling. Her ispiration is Arthur Rimbaud who did the same thing in Season in Hell.</p>

While the depth of insight and critical acumen it took to get to Patti Smith "is not without flaw" it pales in comparison to her take on Smith's use of the word "nigger." Is this seriously your, or anybody's, idea of music journalism?

I used to listen to "Horses" frequently in the late '70s - early '80s. Since then, I've found it & Patti mostly tiresome. Has "Horses" aged well? Maybe to some, but not to my ears. I noticed Thurston Moore in an interview from a few years back echoed my own perceptions. He said he used to be a big Patti fan but as of the time of the interview found her unlistenable anymore. My fave Patti Smith recording is not one of her own songs but is her cover of The Birds "So You Wanna Be a Rock n Roll Star." Roger McGuinn liked it too. And I like what Dum Dum Girls did in the song "Catholicked" in borrowing several lines from Patti's intro. to the "Gloria" cover (from "Horses") : "Jesus died for somebody's sins, but not mine," & a few other Patti lines. DDGs put Patti's lines to far better use in the otherwise original DDGs song than Patti did herself. 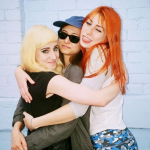 by Emma May
I wish that Northampton, Massachusetts-based band Potty Mouth had been around when I was in the thick of my angsty Green Day phase.