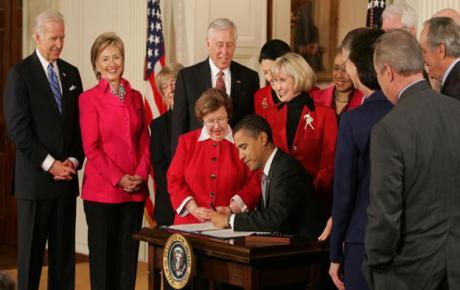 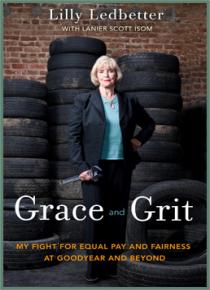 Lilly Ledbetter, behind President Obama, at the signing of the Lilly Ledbetter Fair Pay Act. Her memoir about fighting for equal pay came out in 2012. Photos via Creative Commons.

Lilly Ledbetter is an icon of the fight for equal pay. In person, she’s a very polite and friendly woman whose Alabama drawl draws audiences through complicated subjects like the politics behind the Paycheck Fairness Act and the realities of gender discrimination on the job.

After working for Goodyear for 19 years, Ledbetter became the chief plaintiff in a lawsuit against the company for paying her significantly less than male employees who had done the same job. The Supreme Court eventually denied her claim because she had not filed the claim within 180 days of her first paycheck. In 2009, Congress passed the Lily Ledbetter Fair Pay Act, which loosened the timeliness requirements for filing a discrimination suit. Sadly, her work is as relevant as ever today, since women—including the editor of the New York Times—still face retaliation for demanding equal pay.

I talked with Ledbetter about the media coverage of her case when she was in Portland, Oregon last month to speak at Portland State University’s Center for Women, Politics & Policy.

SARAH MIRK: I wanted to talk to you about media coverage of equal pay. When you first started fighting your case, what surprised you about the way it was covered in the news?

LILLY LEDBETTER: The media coverage in my regard didn’t hit until the verdict came out in my case. The jury came back on a Friday and gave me a $3.8 million award. Of course, the judge had reduced it to $360,000 total, but I loved the media coverage because the next day, the headlines from coast to coast read, “Jacksonville, Alabama woman awarded $3.8 million from Goodyear Tire and Rubber from federal jury.” In one headline, they had me as a “Jacksonville, Florida” woman, but they had my name and Goodyear and the amount right, and that was good! I tell a lot of groups, you have to really dissect what you hear on the media because it’s not always exactly like what you’ve heard and seen. But I loved those headlines. I had folks sending me papers from everywhere and most of them were front pages. My house looks like a museum now.

It would have had a much different impact if it had just said $360,000—having the bigger figure really makes it seem like, “You companies had better listen up!”

That’s exactly right.  It sent a message. Even the 360 was still a good award. It wasn’t what it should be, but I had a lawyer friend tell me later, “I know you didn’t get any money but, boy, that headline, you can’t beat ‘em.”

Did you notice any difference in the tone of the media coverage in your hometown versus nationally?

No, though the national was greater. It just seemed to pick up nationally, which then made the local pick up more. I had a lot of people around my state calling me—the church called me and wanted me to buy ‘em a new bus, people who I went to school with called to see if it was really me who had really won that much money, so I guess it was sort of like winning the lottery.

When you were in the midst of fighting the lawsuit, were you thinking about the way your story would be told in media? Were you conscious about the way you were framing it or the language you were choosing to make sure it had a good headline at the end?

No, no. I focused on what was right, what was wrong, and what was the truth. That’s what we showed at trial and it was proven beyond a shadow of a doubt. There was not a person on that jury who didn’t understand. That $3.8 million, the jury came to that through lost overtime hours, back pay for those 19 years of working, and the future retirements because there’s nothing in the law that allows a person to gain any of that back. It’s gone forever.

Since your lawsuit went through, the wage gap has become front-page news. How have you seen the media coverage on this issue change?

I think the coverage has been much, much greater. From coast to coast and north to south, there was an outcry over the Supreme Court verdict because it was so unjust to take a family’s wages. Because when you’re talking about women’s wages, what you’re really talking about is a family’s wages. There was a lot of pushback and it really showed how far behind we are. We are extremely far behind. Equal pay is 50 years old and Title VII as well and we should be more advanced in this country. And yet the women—the white women—are averaging only 77 cents on the dollar. This is not right.

When you look at new stories about equal pay, what do you wish was more prominent? What do you think is missing from the way we talk about this issue?

I wish more people would understand and accept it. You still get a lot of opposition sometimes. I think that stems from the corporate arguments against it, because they think that it will be such a hardship on them if they comply—which it won’t, it will be a piece of cake if they adhere to the laws, just like anything else. Two, companies have already done some studies on people who do treat their people fairly and equitably: their productivity is better and their bottom line is better. It’s a proven fact already.

Has the way you feel about your case changed over the past decade or are you still angry about it?

I wasn’t angry then and I’m not angry now. This is just unjust, it’s not right. A lot of people can’t understand why I filed the charge—it took nine years to get a trial and ten years to get a verdict. But that was wrong, what that company did to me and my family. When I think about the good times that could have been so much better in our lives simply because they would have paid me what I had earned—my life should be so much better today, if my retirements were what they should be. But they’re not. Each time those checks go in the bank, I know they’re much, much less than they should be.

Do you get frustrated at how slow the change is on this issue?

I warned my family going in that it would take us eight years. I had known people who had tried to get their insurance payments on losing an arm in the factory or something, it would take them eight to 10 years just to get that. So I know that this would not be an overnight solution. On the other hand, the Ledbetter bill passed in just 18 months. That’s pretty good. It was a lot of work, though. A lot of people across this country was writing letters and lobbying to get this past, but it passed.

What was it like to testify in front of Congress about that bill?

I never thought about it until I got there, I just knew it was the place to be because it was time to get something changed. During the Ledbetter Bill process, I testified twice in front of the house and twice in front of the Senate. I also testified in favor of the Elana Kagan nomination. People in this country need to wake up, because your votes are very important. I never thought about my life being changed totally by the Supreme Court, but it was.

What’s the most pressing issue now you’re working on?

Well, paycheck fairness should have passed in Washington the other week. That should have passed. That’s the most critical. That would help the American worker. I have such a hard time understanding how politicians are elected and go to Washington and cannot support what supports the families back home. And I don’t understand voters who let them get away with it. I think we’re approaching a time where people are waking up and learning about this and things will change.

In your experience, why is it still hard to get something like the Paycheck Fairness Act passed when, to you and to me, the numbers make it clear that it’s good policy? What’s holding it back?

The people who are voting for it in Washington.

And what do you think is motivating them?

You’d need to ask them about that, I have no idea. It makes no sense to me.

Well, what pushback do you experience yourself from people when you talk about this issue? What do people say and how do you counter it?

Oh, well, people say, ‘This is not really the facts.’ But this is the facts. You get out there and start talking to people, you’ll find people who can tell you story after story about making less money than their coworker, but they can’t bring it up because they’re the sole breadwinner in their family. They’re living paycheck to paycheck and they can’t afford to ask. I have example after example of people who know for a fact that they’re being paid less, but they can’t do anything about it for fear of losing their job. The fear is there. I have a lady in Chicago right now that’s still battling her case. She worked for the government and found out that her coworkers were making more than she was—same job! Same job!—so she asked about it and they said they’d let her know. Two months later, they let her go. But they gave her a different reason why they laid her off, so now she’s still fighting the layoff and for equal pay. That right there is the reason this country is held behind. One of the women who testified at my trial, they asked her why she didn’t complain about being paid less. She said, “I was a divorced mother supporting a handicapped son and I was living paycheck to paycheck.” We worked for a company where if you discussed your paycheck, you didn’t have a job.

Related Reading: Ten Graphs that Show Babies are Not Solely to Blame for the Wage Gap.

Sarah Mirk is Bitch Media's online editor. Big thanks to the Center for Women, Politics & Policy for setting up this interview.