Pink is the new justice

“I took my gang of several hundred women, all with leki sticks, we surrounded the police station, we beat the police officers sitting outside the station. Then other policemen came out with their leki sticks, our women then got very aggressive and starting beating the police…and then we tied them up.”

It’s not every morning there’s a generally glowing NPR story about, well, militant grassroots uprisings against patriarchy and social injustice, but this morning’s story about the Pink Sari Gang from the northern Indian state of Uttar Pradesh was certainly that…at least if you can get past the constant references to how “angry” and “vengeful” these women are.

Poking around a little bit on the web, I found an even better mini-documentary on the Gulabi (pink) Gang. Turns out that (surprise, surprise) they don’t just beat up police, but have a range of programs encouraging women’s empowerment and self-sufficiency, sustainability and jobs. Here’s the video..

That short film is worth watching. It's well done and humbling to say the least.

This is really empowering, thats the way it should be everywhere! 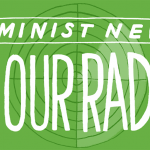