There aren’t all that many fictional depictions of women in politics, at least compared with fictional portrayals of women in domestic service, women in trouble with the law, women in the porn industry, and women in some stage of being attacked and killed by a psychopath. Parsing through characters to search for patterns in these portrayals of politicians has led me back through decades, which has given me a little bit of reservation because I believe that different eras highlight their own tensions. On the other hand, we’re only one remake away from reviving and re-distilling those stereotypes for today’s audiences (I’m looking at you, Manchurian Candidate).

While there may not be all that many stories about female politicians and political operatives, they are out there in the popular culture universe, and often, they are an unflattering meditation on femininity and the corrupting influence of political power. Spoilers for G.I. Jane, Legally Blonde II, Protocol, and State of the Union lie ahead.

Let’s start with the 1948 Spencer Tracy and Katherine Hepburn film, State of the Union. Without a doubt, gluttony for power via the state was a popular theme in this era, as the film falls well inside the shadow of Nazism and the World War II. But to make an even stronger point about the perils of power, we have Foucault—I mean, Angela Lansbury—as an aggressive, manipulative social climber who sees her ticket to power through the election of her lover for President.

She can’t run herself because as Hepburn’s character puts it, “No woman would run for President. She’d have to admit she was over 35.” So Lansbury, playing Kay Thorndyke, machinates to get her husband into office, during, of all things, a contested Republican convention. She may not have political power per se, but she is the head of a newspaper conglomerate, and she is gunning for her own special interests should her boyfriend win the office.

In G.I. Jane, a problematic film for all sorts of reasons, it’s Senator Lillian DeHaven (played by Anne Bancroft) who is the poison character to would-be Navy SEAL Jordan O’Neill (Demi Moore). If the movie trailer played up O’Neill/Moore’s buff biceps and heterosexuality, it also pretended to ask enormous [sic] questions about the limits of gender stereotypes. But Senator DeHaven’s character rolls back any progress on a statement for women’s power when we discover how sinister she is in using O’Neill’s chance at making the SEALs as a bargaining chip for her own state’s gain. DeHaven, it seems, is more than okay with ensuring the failure of women in the elite training program to further her career and hold onto her power. 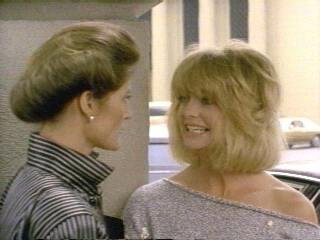 Legally Blonde II: Red, White & Blonde takes the same tack with another long-time actor, Sally Field, who plays what looks like the most powerful woman in the House, Victoria Rudd. We see a similar set up in this plot—while Elle Woods (Reese Witherspoon) works against the expectations of Hill staffers—with her bejeweled, pink dazzling couture and ever-present Chihuahua—”real” political women are hard-nosed and curt, their actions driven by a kind of malignant intelligence. Turns out, not only has Congresswoman Rudd been pretending to support Woods’ push to curtail animal testing by cosmetics companies, she’s secretly been working against her, for the industry. Yes, there are women in this movie who work in politics and who come to Elle’s aid, but the message remains that women in high positions of power got there by making too many deals and becoming “dirty.”

In Protocol, sweet and innocent Sunny Ann Davis (Goldie Hawn) finds herself in the middle of a controversial decision to enter an arranged marriage. Arranged by the US Government, no less, and unbeknownst to Sunny. Behind the strategy is Ambassador St. John (played by Kate Mulgrew), a woman with more political power than is normally attributed to ambassadors of the United States, but no matter, it’s a comedy, people. St. John woos Sunny with her polished persona and worldliness, and finds Sunny a job working in the Protocol Department, which Sunny needs to look up, not knowing what “protocol” means. Eventually Sunny realizes she’s been traded as another wife of a rich emir in exchange for the US getting a base in his country. St. John is exposed and Sunny runs for Congress.

What’s at play here is the idea that political power is so hypnotic that it destroys idealism. Perhaps so many men are in politics that not all of them are opportunistic evildoers, but for any woman to make it to high elected office, she must cast away her principles. The idea that women can both hold power via an office or title and remain focused on working for their constituents is wholly absent in these narratives. It seems the best they can do is become cynical middle managers, as in the character of Grace (played by Regina King) in LBII. For women to retain their integrity, as Elle, Jordan, and Katherine Hepburn’s character in State of the Union manage to do is to reside outside of the political machine. While Sunny Ann Davis learns she’ll be entering Congress after her campaign, the film stops there, at the moment of her feminine and naive gasp.

So maybe there’s hope for female politicians after all.

Previously: The Personal (Life) is Political, Political Fictions Kicks Off!

One of the few positive examples would probably be Leslie Knopes of "Parks & Recreation", I think they did a good job with her characterisation...

Nice example! I'll be looking at positive and "realistic" portrayals in an upcoming article in this series.