Politicians often promise the electorate, especially at the outsets of their campaigns, not to “go negative” or take pot shots at their opponents. We hear phrases like “issues oriented,” “positive campaigning,” and “bridging partisan divides.” And behind the scenes, no matter the rhetoric, somebody, somewhere, is digging up dirt on the other side. But why? What is the appeal and effect of negative campaigning?

According to statistics from ThisNation.com, a non-partisan, academic run website on US politics and government, voters generally don’t hold politicians in high regard, expecting that they’ll twist the truth, outright misrepresent their opponent, and/or sling mud to win elections. But what I find more interesting is a recent article from Deborah Jordan Brooks who teaches at Darmouth College, which shows that negative campaign advertising both mobilizes men to the polls, and de-mobilizes women.

In the middle of the summer, the Democratic Senate candidate from Florida, Kendrick Meek, unveiled a mocking ad against his expected GOP opponent, showing Jeff Greene as a carpetbagging disco slimebag. Meek is now well behind GOP candidate Mark Rubio. Bradley Byrne, running last summer for Alabama Governor was attacked for believing in evolution, something many in the GOP probably still ascribe to, if not publicly. He lost in the runoff election in July. Democratic West Virginia Governor, Joe Manchin, has gone negative so many times in his campaign to be senator he threatens to reverse his polarity permanently; an ad from September questioned his opponent’s company’s history of mine safety, even though John Raese’s Greer Industries has received several safety awards from Manchin’s own administration. I’ll note here that earlier today, Raese was outed as belonging to the same whites-only Florida country club of which Rush Limbaugh is a member. That’s the stuff of Manchin’s negative ad dreams.

Going negative can mean close to anything—a candidate is trying to secure her/his base, deflect attention away from their own insufficiency, or is caught speaking out of turn—but most experts agree that it’s often a sign that a campaign is off-track. And while voters may say they’re exhausted from negative campaigns, they still respond, depending on the nature of the attack, the general tenor of the rest of the campaign, and the history of that district or state.

Negativity reached a nadir last night during the Kentucky Senate debate between Tea Party candidate Rand Paul and Democrat Jack Conway. Conway asked about Rand’s college affiliation with a religion-bashing group that included some arguably offensive moments, and Paul responded by saying that Conway was disrespecting the state. The two didn’t even shake hands at the end of the debate, with Paul walking off the stage.

While mud seems to get slung in every direction, voters now think that Democrats have been more negative in 2010 than the GOP. This may reflect the idea that it’s the Democratic side that is on the defensive, which would go along with the history of midterm elections, in which the party that controls the Executive Branch loses seats in Congress and in governors’ races. Although party insiders on each side will analyze this election after polls close on November 2, chances are nobody will walk away from negative campaigning for the next election.

i can't find a way to read the Brooks article for free. is she arguing that men are mobilized to the polls because negative campaigning changes/solidifies their minds? what's her hypothesis for why that is?

Let me get the issue in front of me when I get home and I'll summarize it.

Politico reports that advisers to the main 2012 presidential contenders and other veteran Republican operatives reveal they have one mission in common: Stop Sarah Palin. Pickup this message at 214PM via Smirf etc. decoded 227PM

Obtained from reliable sources and yes it's true Aliens have decided to cast their vote for the Tea party.The greys have reviewed the political issues of all the party's and have agreed that those who have the tea party's viewpoints are less likely to present issues that conflict with their globle view obstructions. Sometime soon after the midterm elections they will make themselves knowed but in the intermin they have left their sexuality concerns and viewpoints in sacred trust with the earthling Sara. All other concerns about the future have been stored in the secret and private volts of the A1 Limo service. Since my retirement my personal advisor in matters of this importance have been rendered to me from Horhay who is also a friend and my special ranch weed grower. Sincerely, your friend George

Jeffrey Skilling, the former Enron Corporation president, has one last, good chance to get out of prison soon. The Fifth U.S. Circuit Court of Appeals in Houston will hear arguments today about how many, if any, of the 19 felony counts on which Mr. Skilling was convicted in 2006 should be overturned as a result of the landmark Supreme Court decision in his case. Please don't worry Election Year Medicaid Medicare Inducement issues left open for November not openly discussed.Politics have gone from heated to man on fire thoughts. Also the Judicial dilemmas, since all are offically allowed to bear arms again, the big city Mayors are concerned about how the poor will be able to rearm themselves, and are looking for some type of financial relief from Federal State Medicaid programs to maintain their status quo.The higher courts face tough issues this term since making honest fraud legal, there agenda now turns toward making honest kickbacks and honest bribes equally as legal. This topic remains high as a shared issue by the medicaid medicare enrollment providers since they are looking to expand inducements past the complicated pregnancy stage.

The DOJ has serious concerns that if legalized marijuana in California for medical reasons could be used as a inducement or inticement to help secure new enrollments for the Federal State Medicare Medicaid programs.The State of California is concerned that if the Feds step up their effort in killing off the marijuana crops it could cause higher tax problems that effect Medicaid currently under consideration by the State 'marijuana tax control board'. Limo drivers cancel their planned Medicaid Cuts DC rally and leave for California to protect this years crop. Wow, don't think I would like to be in Politics for this years elections. Govenor Schwarzenegger indicated that if the Tea Partys membership keeps holding their rallies at our Marijuana burning fields they will have to be taxed for their free use of inhalants, prior to having them bused back to Arizona. Senator McCain wants the deportation of illegal Mexicans to stop immediatley claims their State has gone to POT and insists California return his landscapers at once.

Relevant: What "The Golden Girls" Taught Me About Bioethics 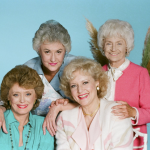 by Elizabeth Yuko
From HIV stigma to a mansplaining doctor, The Golden Girls covered a lot of science and health topics that other TV shows didn't.