We are still early in the 2012 election cycle, but already the primary phase has had its share of missed opportunities, hilariously inaccurate statements, and misplaced emphases. Defining those moments is probably up to some debate, but here are some candidates:

Funniest Inaccurate Statement—Hands down, Michele Bachmann comparing her political style to that of fellow-hometown native John Wayne. Only John Wayne isn’t from her Iowa hometown of Waterloo, serial-killer/clown John Wayne Gacy is.

Most Persistent Candidate Spouse Attention—Questions continue to swirl around the sexual orientation of Bachmann’s husband. Certainly, caling gay men “barbarians” is repugnant and very problematic given that Marcus runs a therapy practice. But is wondering aloud about his potential gayness helpful for evaluating Ms. Bachmann’s candidacy? I’d love to hear arguments that it is. Yes, there is a long history of questioning Republicans’ orientations, especially when they also have extreme anti-LGBTQ voting records—I’m looking at you, Senator Ashburn—but as far as the primary goes, shouldn’t we be emphasizing the candidates themselves?

Weakest Backbone—Sure, Tim Pawlenty was critical of healthcare reform when it was just him in front of the reporters, but put him on a stage with Mitt Romney, and he backpedaled faster than Lance Armstrong denying steroid charges. Now Minnesota has just begun a painful and wasteful government shutdown—the residents of the state will now have to foot the bill for every state worker’s unemployment—and what is Pawlenty’s reaction? It “could” be a good thing for Minnesota. “Could be?” Does this man take a stance on anything? Oh, right, he’s firmly against abortion.

Most Offensive Hacking—Over the weekend Fox News’ Twitter account was hacked, and the conspirators posted a series of messages that President Obama had been assassinated. First, this makes me wonder what kind of security large and/or significant organizations have in place for their social network accounts, and second, those hackers are going down. The Secret Service is on the case, and they really do have the means of identifying who did this. I know a woman who flipped off President Bush during his second inaugural parade from her hotel window. Five minutes later the Secret Service were at her door, asking her what she’d meant by the gesture. Barack Obama gets more than 30 death threats a day; this will be investigated until it’s over. 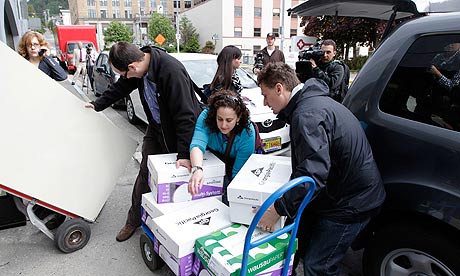 Most Aggravating Election Story—Is Sarah Palin going to run for the White House? Why did she cancel her bus tour? Why did we think she was canceling her bus tour? Every question asked of Ms. Palin is an opportunity for her to talk about the “lamestream” media, in all of its ableist glory. The more interactions with her that happen, the greater the chance that a new kind of abysmal talking point will erupt and hypnotize the media into pondering it for the next week. Is Trig really her baby? Does Bristol know if she’s running or not? What will Levi’s book reveal about the family? The State of Alaska released tens of thousands of Palin’s emails from her short time as governor—which is kind of impressive in and of itself—and told people that they’d need to come to Juneau if they wanted to get their own copy. They came like dung beetles to piece of scat in the desert. Think of the trees lost to reproduce those emails. That Palin’s legal team had already combed through the emails before their release didn’t deter many at all, and news outlets posted the emails online, asking their readers to help them spot anything juicy. Please, can we move past Sarah Palin?

Quietest Marker of Success (or Not)—Staff resignations. Newt Gingrich shrugged off the first round of resignations from his strategy team, but had less to say when his finance and fundraising people left for greener pastures. Now Herman Cain has to reshuffle from a series of resignations this week. Well, it was nice for him as it lasted.

Strangest Rant—Glenn Beck’s departure from Fox News may have been initiated by the network executives, but his last episode was all about how he’s wanted to leave for a while, in order to create a Glenn Gestalt in hyperspace. If only people will pay for this. But hey, his last show gave us all an amazing highlight reel.

Most Laughable Request—Tom Petty sent a cease-and-desist letter to Michele Bachmann, who had been playing “American Girl” at her campaign events. In addition, Katrina and the Waves (who are represented by the same company as Petty) don’t want her to play any of their songs either. Sorry, Ms. Bachmann, “Walkin’ on Sunshine” is Hillary Clinton’s song.