There's a brouhaha in northern Iowa, as people have begun decrying a new anti-Obama billboard bought and paid for by a local Tea Party organization. It depicts Adolf Hitler as a "Nationalist Socialist," Barack Obama as a "Democrat Socialist," and Lenin as a "Marxist Socialist." Nevermind that "socialist" means different things in the first and last contexts, and that the middle descriptor is totally made up and nonsense. The billboard unwittingly represents nearly the entire length of the political spectrum from communist to fascist, but it's presented like these folks would be beer buddies.

At the bottom of the billboard it reads: Radical leaders prey on the fearful and naive. I give them one point for getting the spelling of all that correctly, but I also deduct 10,287 points for not seeing that they're actually describing... themselves. For comparing President Obama, a fairly and bloodlessly elected leader to Hitler and Lenin (and I admit I have a soft spot for a lot of Lenin's writing), is, for most Americans, to attempt to instill fear about his leadership, and to count on people's lack of knowledge about political history to think that the logic of the billboard works. So what was that again? Preying on the fearful and naive. I see.

I'm amused and curious about why this billboard is the focus of a ruckous and the first-I've-ever-noticed-backpedaling from the Tea Party about any of their signage. After all, I've seen the following: 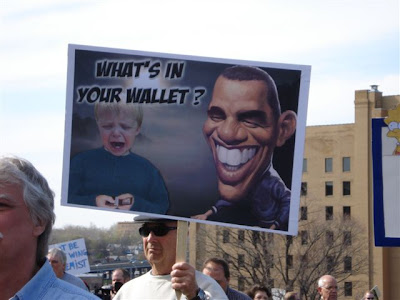 Now then, these don't have the Tea Party moniker on the bottom of them, so of course there must be no connection to the critiques by extreme right-wing conservatives and the people who feel motivated to erect such monuments to human creativity and intelligence. Only I don't believe that. Spouting off about the President's birth certificate, the evil of making health care insurance more readily available to people, taking the tepid support he's shown toward the LGBT community and calling it evidence of anti-Christian ways, these are all feeder lines into the very most angry people in the country. Many of these billboards have become attempts at creating a tipping point, and extremists have heard the message. There are more death threats against this President than any before him. The Secret Service has had to hire more staff to deal with 30 threats a day.

But hey, Shelby Blakely of the Tea Party Patriots, has her reservations about the billboard in northern Iowa, so all is well, right? She said:

"It's not going to help our cause. It's going to make people think that the tea party is full of a bunch of right-wing fringe people, and that's not true."

Sure, Shelby, because all the other evidence points to the fact that your network of organizations is chock full of level-headed, rational, educated on the issues folks who would never disingenuously misrepresent history. So they must have flip-flopped the right-leaning and left-leaning politicians on their Iowa billboard on purpose, and they just think that their brilliant messaging is lost in the visuals.

I think a lot more is getting lost.

I can't decide if it's better or worse than those "who is John Galt?" billboards all over Florida.

Ugh. Ayn Rand. Are there really billboards all over Florida?

I for one never compared Bush to Adolf Hitler, although I did have a principled critique against the Patriot Act, which we now all know wasn't the actual constriction against wiretapping Americans, since well, Bush's administration went ahead and tapped people's phones without any legal framework at all.

I don't recall big billboards decrying Bush in the way that I've seen loads of anti-Obama ones as I've driven through the country, and I've now logged 5,200 miles on my car this summer. So no, I don't really think it's a fair comparison, Anonymous. But thanks for playing.

Hey anonymous, you know what it's not fun? The race baiting. Bush=Monkey? That one is new and I would like to know in which context it was used.

I just wanted to say that while there is not a Democrat Socialist, there are Democratic Socialists. Sen. Bernie Sanders considers himself a Democratic Socialist which is roughly defined as someone who believes in our democratic process, and feels that everyone is entitled to healthcare, food, shelter, etc. Count me in!

Yes, that's a good distinction! I think this is just an example of neoconservatives opting to use "Democrat" to annoy people in the Democratic party, who take offense at its use.

This kind of crap makes us in Iowa look like a bunch of idiots, and we are not. Sure, we have some like every other state, but it is not the majority (maybe I'm too optimistic lol). I think part of the reason is that the Govenor here publicly denounced it, along with Iowa's tea party members. I'm not really sure though why this was the one that made everyone denounce it...

btw, that was a typo *governor*

and I have the great misfortune of encountering Obama-(Governor) Culver-Liberal-Progressive-Gay marriage haters (Reminder: We have gay marriage!) and Glenn Beck/Limbaugh/Ron Paul/Ayn Rand fans on a daily basis in my workplace and other places where I need to trek just to do regular errands. The expressions of hatred and misogyny are more than enough to make me want to pack up and leave. But when I go home at night, I have to tend to caregiving my native Iowan parents, whose cemetery plots have been picked out here. As a longtime <i>Bitch</i> reader and progressive, I know well enough to stand up to these idiots at every turn. Yet dare I do, I risk losing my job. Living here is not fun, even when I consider myself more a part of a majority than these ignorant right-wing extremists, who will stop at nothing until they get the miserable world they want to live in to use, exploit, and worse ... anyone disagreeing with their dangerous, inhumane agendas.

StephanieL: I remember the voting district maps of 2000, 2004, and 2008, and really every state, whichever way it went for President, has its liberal and conservative districts. I think the reason why this billboard made the news was because it was a slow news day on other fronts (the public is exhausted about BP, the Senate delayed the vote on Elena Kagan, there are no new scandals), and this billboard was officially sponsored by a Tea Party organization. All the other billboards have been sponsored by individuals or folks not officially condoned by the Tea Party folks. It certainly wasn't my intention to pick on Iowans per se, but that's where the billboard is. Like I said earlier, I've seen a lot of anti-Obama billboards up all over the country. Some right here in Democratic-leaning Michigan.

from the right than on the left in the previous administration is the sad fact that the right is much louder and more organized, in a weird lockstep sort of way. Or maybe I should say, the far right. I don't know that I think that all conservatives make the Hitler comparison, although it's a hell of a lot easier than to intelligently express why one disagrees with Obama's policies.

Oh, and speaking of him, I find the idea of Obama being a socialist to be a little hilarious as I am at this point not even sure he's a liberal. And as far as I can tell, Democrats and Republicans are Corporatists.

@Laura: I don't disagree with your sentiment about President Obama's leanings. I find him to be a solid centrist, like Clinton, but we've slipped a long way to the right since 1993, when President Clinton took office. It's a political parallax effect.

I had chance to be in a conversation yesterday where some farmers in Michigan were asking what was actually covered in the health care reform. They were agog that there isn't actually "universal" health care in there anywhere. One of them shook her head, saying, "I just don't get what the big deal is. Why can't the richest country in the world do this?"

I think her comment pretty much sums up my feelings on the matter.