Political InQueery: SCOTUS, Wal-Mart, and the Limits on the Rule of Law | Bitch Media

Political InQueery: SCOTUS, Wal-Mart, and the Limits on the Rule of Law

In what I’ll call the executive summary of the Supreme Court’s decision to throw out the class action lawsuit alleging sex-based discrimination against the female employees of Wal-Mart, Justice Scalia writes that the plaintiffs must show evidence that the company operates under “a general policy of discrimination,” and that the Court does not see this evidence. Well, how smart of sexism that it doesn’t operate that way. Today, I’ll take a look at the majority and dissenting opinions in this case.

Their claims must depend upon a common complain of such a nature that it is capable of classwide resolution which means that its claim of truth or falsity will resolve an issue that is central to the validity of each one of the claims in one stroke.”

If Wal-Mart had a sign printed in the window of its stores saying that women need not apply, for example, that would be a general discriminatory practice. But Wal-Mart states in its employee handbooks that it operates in accordance with the Equal Opportunity guidelines, and has policies in place that penalize sex discrimination. This is a basic example, but on many different grounds of the lawsuit, SCOTUS refused to acknowledge how sexism itself operates in the American workplace:

“Commonality requires the plaintiff to demonstrate that the class members have suffered the same injury.”

Yes, perhaps this class of 1.5 million women is too big for SCOTUS to wrap its collective heads around, and somehow precedents for managing very large class-action lawsuits don’t apply here. But if there is no way for current and former employees to show that the corporate culture of their company gives managers permission to be sexist, then each woman is on her own. According to the SCOTUS decision, if sexism isn’t happening at regular intervals—say for some percentage of female employees, as is mentioned by Scalia—then the law can’t see it, at least for class action cases.

If only sexism—or people—operated that way. “Refuse to hire every fourth African American woman”—now that would be a bridge SCOTUS would cross. But providing discretionary judgment capability to managers, in the eyes of SCOTUS, isn’t where room is made for bigoted practices or attitudes, it’s evidence that there is no systematic discrimination at Wal-Mart. This is blind, again, to how oppression happens in the workplace.

These charges about commonality in the class and in the discriminatory practices by Wal-Mart were questioned by Justice Ginsburg, who wrote a dissenting opinion that argued the plaintiffs met the standards of evidence for having a common issue or complaint. But this Court, which has given broad powers to corporations in the past, most notably in allowing a flood of corporate money to affect American elections, overruled arguments like Ginsburg’s. She writes:

“Managers, like all humankind, may be prey to biases of which they are unaware. This risk of discrimination is heightened when those managers are predominantly of one sex, and are steeped in a corporate culture that perpetuates those stereotypes.”

Justice Ginsburg goes on to argue that SCOTUS, in this decision, is using more stringent criteria from an incorrectly applied rule from Title VII of the Civil Rights Act of 1964, and is erring in its decision to overturn the 9th Circuit Court of Appeals ruling to let the class action suit go forward. What seems to be falling through the cracks in this case is whether the law will allow adjudication of stereotyping biases without the intention to discriminate. If sexism wins that battle, what happens to redress for American women?

I agree that the court misreads how sexism functions and in many ways this ruling will serve as a blank check for big corporations to continue to fail to address sexism and discrimination within their corporate structures. That said, I think it was probably right to dismiss this case on the basis of the overly broad class. And while I agree with your observation that oppression doesn't refuse to hire every fourth African American woman, I think it is the African American women who were actually directly impacted that need legal remedies. The indirect impact that discrimination has against all women (and African Americans, and all other oppressed groups) is a cultural battle and while the court may sometimes help to advance that battle, it will also often set it back (as it did here). The court really isn't the right tool in all cases. I'm disappointed that this ruling killed the bulk of the anti-sexist litigation against Walmart (at least for a while) but I also agree that this case was too broad to properly litigate or ajudicate.

(Also, I dislike the slant of your first bullet point... The court taking it easier on people with good/neutral intentions than on those with malicious intentions is appropriate. That is the basis for the distinction between manslaughter and murder, regular crimes and hate crimes, and various other important criminal distinctions which are, in my opinion, appropriate)

Regarding your comment about African American Wal-Mart employees, absolutely, staff are differently affected based on their intersections of other oppressions; I'm not sure we're disagreeing here.

Also, I'm trying to point to the limits of the court system in serving as a means of justice for women who are so affected by biases among management, on a system-wide, if not intentionally systematic basis. I certainly don't think the court is the end all be all of avenues for liberation—far from it, actually. But the basis upon which Scalia and SCOTUS argued the plaintiff's case had no merit? I find it specious, and disingenuous (there was another basis upon which to judge the merits, for example), and at odds with what feminism argues regarding how these -isms operate in the workplace and in culture. I don't expect Scalia to agree with those stances, of course, but for our purposes, we need to build a response to SCOTUS' line of thinking and take steps to address the limitations of this and whatever similar court decisions would come on the back of this.

Regarding intent, as I wrote in the article, I understand that intent makes a difference with regard to all kinds of law—you list a few different criminal procedure and sentencing guidelines—but SCOTUS here is saying that lack of intent removes all responsibility on the part of the misogynist to simply remain unaware of his prejudice in order to continue being prejudiced. Certainly this is the same way libel operates in the United States. The minimum threshold for committing libel against another person includes the intention to harm the other party with the falsehood. But how do we feel about female employees needing to meet as high a bar of burden as people seeking redress in a libel case? I see a problematic precedent in this, and I acknowledge I'm not a legal scholar. If unintentional bias means anything, it leaves open the door to training for the oafishly sexist man, I suppose. But the material result is the same once we're talking lost wages, unfair demotions or lack of promotion, on-the-job belittling or the creation of a hostile work environment, and short-changed expectations for advancement. I don't want to let SCOTUS off the hook with regard to giving managers any kind of impunity to be sexist, and in their argument for reversing the 9th Circuit Court's decision, that's what I read.

This ruling continues the kind of suspicion of women's statements that we see in sexual assault cases. And just as we see very significant underreporting in those cases, we should expect that a ruling like this codifies a similar response in workplace discrimination. And I can't abide that.

I agree the class status is difficult to manage in this case, with 1.5 million people in the class, but again, the way in which Scalia wrote the decision has consequences for a feminist agenda and more importantly, the women who work at Wal-Mart. 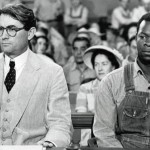 by Tajja Isen
Representations of the legal sphere are still dictated by a very narrow definition of what it means to work in law.