Political InQueery: The Danger of Conscientiousness 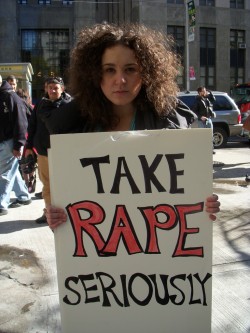 Last winter a certain bill in the House of Representatives caught the attention of the media. At the very start of the 112th Congress, House Republicans made moves to “redefine rape” and shift how publicly funded insurance covers (or doesn’t cover) abortions. Speaker of the House John Boehner, at the time, said that the No Taxpayer Funding for Abortion Act was a priority for the GOP. An outcry from pro-choice, women’s health, and anti-poverty advocates rose up almost immediately, and the bill’s sponsor, Christopher Smith of New Jersey (and my Representative when I was a teenager), backed down.

And then in May H.R. 3 came back to the floor of the House. GOP representatives voted for it unanimously, and 16 anti-choice Democrats also lined up to vote yes. Now it sits, waiting for the Senate to take it up. Chances are, it will be waiting for a long time, just like Schoolhouse Rock told us happens with some bills.

Many more than competent analysts have examined the language, and thus the consequences of H.R. 3: it would greatly curtail the availability of insurance plans that cover pregnancy termination, it would create a new area of audits by the Internal Revenue Service to ensure that no woman uses any tax credits or deductions to pay for a termination, and it would prevent women in the military from having an abortion on federal property. Also, as others have reported, while the “forcible rape” redefinition language was technically removed from the bill itself, it remains in the committee report, which is the document that outlines what the Congress intended via the legislation—committee reports are what jurists and their clerks turn to when interpreting law, thus the GOP is seeking a backdoor route to including the effect of the redefinition, if not the language itself.

This anti-choice push comes from somewhere; it’s predicated, for example, on the kind of logic used by conservative medical personnel who refused to perform abortions on “right of conscience” grounds, a basis introduced decades ago but made much more prevalent and powerful during the Bush Administration, through a new regulation. Groups like Physicians for Life monitor the incidences of these objections, and the efforts by pro-choice advocates to roll back allowances offered to medical and pharmacy workers.

The bill itself uses this kind of language:

An Act to prohibit taxpayer funded abortions and to provide for conscience protections, and for other purposes.

The “right of conscience” makes for a strong defense against women seeking to terminate their pregnancies by pitting one person’s moral values against another and warping the patient-provider relationship. This latest push on Capitol Hill to extend “right of conscience” protections to every single taxpayer who could be supporting an abortion with some tiny fraction of their taxes is an attempt to set the entire population up against individual women who can’t afford, for one reason or another, to pay out of pocket for a procedure, RU-486, or other means of preventing or ending pregnancy.

It is important to remember a few things here:

Making “right of conscience” demands in our health care system has far-reaching implications legally and for the lived experience of millions of women; but as a metaphor it is still largely underground. I’m wary of a country that implies pro-choice people don’t have consciences. This demand doesn’t work in reverse, of course. As election 2012 gets underway, we need to watch for where else candidates are proposing such “right of conscience” demands and “redefinitions” should be put in place. Because even though Republicans like Chris Smith swear they’ve backed away from redefining rape, more likely it’s the case that this was a testing of the waters and will be taken up at least on the state level.

As evidence that H.R. 3 spells big trouble, two Democratic representatives introduced a new bill last week: the Military Access to Reproductive Care and Health Act, which would resupply access to abortion for female servicemembers if H.R. 3 is made into law. H.R. 2085 isn’t likely to go anywhere or even come up for a vote, but it is a small example of a different stance on women’s access to reproductive services. This election cycle is going to get very ugly, just like the last several election cycles have. What will be important to track is how much anti-choice money—now allowed by the Supreme Court—filters in on behalf of GOP candidates, and how often these funders report that they were motivated by H.R. 3.

Meanwhile, in the interests of full disclosure, Rep. Chris Smith wrote a lovely letter of support for me back in 1987 when I was looking to get into an art camp for writers. Thanks, Mr. Smith, for saying I’m a talented writer!

Previously: Yes We Might, Out of the Gate in an Information-Rich World

The woman in the photo, looks a lot like Shelby Knox, http://shelbyknox.com/