Political InQueery: The Trick of Measuring Up | Bitch Media

Political InQueery: The Trick of Measuring Up

Ronald Reagan has nearly reached mythic status in this early part of the 21st century as something of a Republican’s Republican. Every year in Congress, no matter which party controls the House, at least one representative introduces a bill to name something big after Reagan, or to build a monument, or make space on Mt. Rushmore, and so on. But looking at Reagan’s domestic agenda reveals that his rhetoric was a lot closer to current Tea Party talking points than his actual politics. Reagan may have been the first President to cast doubt on the sanctity of “government,” but are conservatives overstating the man? And when we look at the candidates in the running for the White House, do any of them meet the new standards of the extreme right wing?

Certainly Reagan’s sweeping 25 percent tax-rate cut and tax restructuring—on the heels of Jimmy Carter’s administration—is a moment many far-right people want to revisit, even though the supply-side economics never panned out for the country. At least the top tax bracket back then was upwards of 90 percent.

But Reagan, in order to save Social Security from imminent demise in 1983, ordered the biggest expansion of the program, bringing in 98 percent of American workers to the program. While he may have appointed Antonin Scalia to the Supreme Court, he also appointed Sandra Day O’Connor, who became a rather liberal justice during her tenure. And then of course there’s the 1986 immigrant amnesty program, which extreme conservative personalities like Rush Limbaugh have trouble digesting. In the hallowed halls of Reagan, people like Limbaugh will call this one moment of the 40th President a “disaster.”

I’m certainly not saying Ronald Reagan was a liberal, or even a centrist. But for a zealously right-wing electorate, can any politician satisfy them? Looking at the current—and growing—flock of contenders:

Mitt Romney—So far, he’s the frontrunner in the primary field. But he has his albatross of health reform around his neck and he has given no good answers about why (Massachusetts’ system was spiraling down) or how (he worked with a Democrat on the policy) he came to create Romneycare. It’s become such a third rail for him that he won’t even tout the positive effects in his old state—fully 98 percent of Massachusettians (I swear that’s a word) have health care insurance.

Jon Huntsman—He’s pro-gay marriage, and he’s from Utah. So take that stuffy opinion about Utah conservatives and revise it. Oh, he also worked for Barack Obama as the Ambassador to China. And he doesn’t have Romney’s war chest of money.

Newt Gingrich—He certainly sounds very conservative. He just doesn’t have many people to endorse him. And there is that divorce history. Conservatives like more facade over their fake marriages, thanks.

Tim Pawlenty—Much as I’d love to see anyone with “paw” in their surname get nominated, it’s probably not going to happen. On the stump he is checking all of the conservative boxes, but his strongest talking point so far—in his new Iowa radio ad—is that he comes from a “not conservative” state. Pawlenty is unwilling to get hostile with liberals, LGBTQ people, and the pro-choice community, and the GOP primary voters seem to be looking for lots of angry invective.

Herman Cain—He would love it, apparently, if people would stop talking about his race. Especially Jon Stewart. Cain does fit the ideal of conservative business man, but so far—and this week’s funding announcements will bear this out—it looks like he’ll have to use a lot of his own money to finance his campaign. With the 2012 cycle expected to be the first billion-dollar campaign, he’ll need to win over big donors or get the kind of grassroots interest that people like Obama inspired the last time around. But nobody’s out there saying he’s not conservative enough for the Tea Party.

Michele Bachmann—She’s got the polling numbers and the Tea Party love, but just this morning Bachmann was called out by the Washington Post because family members have received public money, including federal money to support a farm. Worse, she asked for the stimulus funds for her district, a big Tea Party no-no. On the other hand, she’s certainly willing to go for the rhetorical jugular and wade right into hatemongering. She’s seen by many as more policy-minded and politically astute by Sarah Palin, who, by the way, canceled the second half of her bus tour through America. And by canceled, I mean, “on hiatus,” to resume on some currently unspecified date.

Ron Paul—A classic libertarian, Paul differs from far right-wing conservatives on at least one significant point: he has said time and again that conservatives want empire and he is anti-empire. Since 1987, when he famously “dissociated” himself from the Republican Party, Paul willingly sets himself apart from those who would nominate him. Just last week he made comments that made him seem anti-war.

Is it time for mainstream Republicans to take back their party? To talk about where ideals end and people begin? When do people decide to stop chasing ghosts and legends? How can an electorate select an anti-government figure to run government, and what happens when that person, in her or his attempts to govern, needs bipartisan support or abides by government regulation and practice? Don’t they then become an enemy of the anti-government conservative community? If those conversations don’t happen, we may all be hamstrung in the contradictions of this political approach.

Meanwhile, the eventual GOP nominee may have a terrible time trying to backpedal to the center for the general election after all of the right-leaning bootstrapping and heated talk. But we’ll all have their early election cycle quotations and position statements against which to judge that nominee.

Previously: How to Stop People From Voting, SCOTUS, Wal-Mart, and the Limits on the Rule of Law 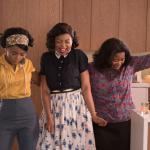 by Sarah Mirk
Based on the lives of real women, the upcoming movie stars Janelle Monae, Taraji P. Henson, and Octavia Spencer