It has only been a few years since the “yes we can” wave made landfall in Washington, DC, ushering in Barack Obama and a broad sense of hope, after two long Bush administrations, during which progressives were increasingly alienated and frustrated. While President Obama was marketed, during the last campaign, as a liberal politician, his political stances on everything from same-sex marriage to economic policy and health care reform, were more centrist. So while hope and change led the day, for 2012 he will have to struggle against whatever cynicism has formed since 2008, and battle what many see as a disappointing track record in his first administration. So what are the messages we’re likely to see from his campaign management this time around?

Last week the White House set up a website trumpeting advances made for LGBTQ people and touting its support for the community, which means the site mentions everything from celebrating Pride month to LGBTQ-focused meetings that have been held at 1600 Pennsylvania Avenue NW. Front and center on the site is the photo of the President signing an Executive Order granting domestic partner benefits to all federal employees. And there is video after video of Mr. Obama and executive branch staff with their individual “It Gets Better” messages to LGBTQ youth.

Whether it gets better for queer youth is debatable; so far, it has not gotten better for the President.

He is caught between arch-conservatives, for whom his actions are never conservative enough, and the progressive left, who are voicing their disappointment in his centrism. Upon the news that Osama bin Laden had been killed by a Navy Seals unit, right-wing pundits from Rush Limbaugh and Bill O’Reilley questioned the President’s honesty in releasing details and pressed for pictures and proof, while progressives like Noam Chomsky called the action a violation of international law.

Less recently, when then-newly-elected President Obama decided to bail out Wall Street, in order to head off what he thought would be a total credit market collapse, liberal Nobel Laureate Paul Krugman was there to decry the decision. Meanwhile, conservative and right-leaning libertarian groups openly criticized the financial support as a government coup of free enterprise. I suppose it is challenging to prove one headed off a depression, as avoiding an outcome is much less measurable than running head first into it. 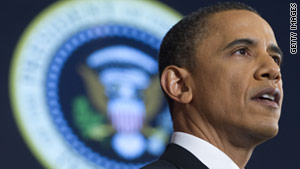 Many of Obama’s victories have come off as elusive. Bringing up LGBTQ issues again, Don’t Ask Don’t Tell is still technically in effect, even though the Senate voted to rescind the law last December, and last week’s dismissal of a US Airman is a bruise on the President’s LGBT legacy, even though the individual decision didn’t come from his office. Health care reform was split into policies that went into effect immediately and others wait around until 2014 to go live, muting the effect that most Americans will see from the legislation. Unemployment remains stubbornly high, at 9.1 percent, and in response, the White House called it a one-month anomaly. That might turn out to be a mistake if the jobs report doesn’t improve in say, June.

All of this amounts to an administration with no blockbuster victories around which Democrats can rally. Privately, people close to the President have said that he wants to run a similar campaign to his 2008 landslide. Well, of course he does. But to copy 2008’s messages seems next to impossible. How does an incumbent run a non-incumbent campaign? And wouldn’t that mean that he’d never give a press conference as President and seek to have some of that glow rub off on his reelection bid? I’m certainly not that idealistic. His messaging is going to need to thread a very narrow needle—you elected me to do a difficult job, and there is much work that still needs to be done. It won’t be George H.W. Bush’s “stay the course, 1,000 points of light” message, but it will ask 2008’s Obama voters to commit to showing up at the polls and sending in their ballots. Less hope, more individual ownership and initiative.

As the campaign season wears on, look for the Obama election staff to focus on different communities in an attempt to expand both the electorate who will reelect him, as well as their enthusiasm. For a President who has received criticism from both sides of the political spectrum, it will be up to Jim Messina, Obama’s campaign manager, to recast accomplishments from the first term as significant, the opposition as dangerously out of touch, and the urgency in 2012 as one of even starker importance for the nation than we had in the last cycle. It won’t sound like “it has to be done,” it will be “it must be done.”

Previously: Out of the Gate in an Information-Rich World, Let the 2012 Games Begin