Films to Watch This Week at PIFF: Attenberg | Bitch Media

Films to Watch This Week at PIFF: Attenberg

There are many movies about a young person awkwardly stumbling into adulthood—but most of them are about dudes. Attenberg refreshingly follows a 23-year-old young woman who’s smart, but still doesn’t have all the answers. Marina lives in a coastal Greek city with her father Spyros, who is dying of cancer. She ferries visitors in her Volkswagen and hangs out with her BFF, Bella. Marina discusses sexuality with the more “experienced” Bella, but not in a desperate, lose-your-virginity-in-a-week way, but with an honest curiosity, a detachment grounded in humanity, just like how her hero David Attenborough discusses nature (Marina is irked by Bella’s unwillingness to pronounce his name correctly). From kissing lessons with Bella (the movie opens with this incredibly clumsy exchange) to a nonexploitative, yet confounding attempt by Marina to lose her virginity to one of her Volkswagen fares, her undertakings to understand her own desires (or lack thereof) are frank and refreshingly nonerotic. That is, the film never feels male gaze-y, and it’s refreshing to watch sex and nudity that’s awkward (like life off-screen) and even a bit silly.

Bella and Marina seem their closest when practicing Silly Walks (à la Monty Python) and play-acting jungle creatures, and more like frenemies when discussing sex and relationships. Far more touching and compelling are the scenes of Marina and her father, an atheist architect who accepts his daughter’s curious queries about sex and love with humor and without judgment. Marina must comes to terms with her father’s departure, and her impending independence seems like the biggest catalyst for her sexual quests.

Screenwriter and director Athina Rachel Tsangari (Trivia alert! She lived in Austin for 12 years and played the “Greek cousin” in Richard Linklater’s Slacker) approached the movie in the same way her protagonist approaches humanity. She told the Village Voice“I don’t use psychology, I prefer biology or zoology. These are my tools.” .

Other films to watch this week at PIFF:

Found Memories (Julia Murat - Brazil)
When Rita, a young photographer, comes into a small village, she awakens something in Magdelena, who is still mourning the death of her husband. “A gentle, poetic film in which one can delight in getting lost, if just for a little while.”—Toronto International Film Festival. Watch trailer here. Thu, Feb 16, 8:45 PM (Cinemagic)

Goodbye First Love (Mia Hansen-Løve - France)
As a teenager, Camille falls head over heels for Sullivan. When he leaves to travel in South America, she is devastated. The film follows her life over the next eight years…when Sullivan returns. “Touchingly illuminating the indelible imprint that first romance leaves, Hansen-Løve’s film also explores the hard-won satisfaction of leaving the past behind.”—New York Film Festival. Watch trailer here. Fri, Feb 17, 8:45 PM (Cinema 21)

Relevant: The Unusual Suspects: What heist narratives hold for women 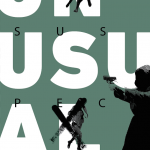 by Aya de Leon
For women, the heist genre has revolutionary potential to imagine redress of the wage gap, wealth redistribution, and that still-feared quality, female ambition.