Preacher's Daughter: Class Consciousness in Mavis Staples' "You Are not Alone" | Bitch Media

Preacher's Daughter: Class Consciousness in Mavis Staples' “You Are not Alone”

Mavis Staples—gospel singer, soul artist and Civil Rights activist—is nothing short of a living legend. She started singing gospel with her family in the 1950s and had a successful Stax career as front woman for the Staple Singers. Though the family specialized in gospel, Staples’ raw vocals and the band’s bluesy arrangements endeared them to secular and religious audiences alike.

At seventy-two, she shows no signs of slowing down. Last year, she released Grammy-winning gospel album, You Are Not Alone, in a collaboration with Wilco frontman Jeff Tweedy. It featured a handful of newly arranged old gospel songs as well as new ones like these (penned by Tweedy):

(“Only the Lord Knows” lyrics here.)

The album got rave reviews, even from hipster-friendly music sites like Pitchfork. In her 1997 book, Blues Legacies and Black Feminism, Angela Davis writes:

Art never achieves greatness through transcendence of sociohistoric reality. On the contrary, even as it transcends specific circumstances and conventions, it is deeply rooted in social realities. As Herbert Marcuse has pointed out, it is at its best when it fashions new perspectives on the human condition, provokes critical attitudes and encourages loyalty to ‘the vision of a better world, a vision which remains true even in defeat.’ (p. 183)

I believe one reason this album resonated so widely is that, though rich with the sounds of old spirituals, gospel songs, soul singers and blues greats, it is deeply rooted in contemporary circumstances. In particular, this album has a very specific class consciousness to it. This is not to say that there was no class consciousness in earlier Staple Singers gospel albums, but that by 2010 and 2011, class disparities have become even more relified, more extreme. More than ever, class deserves a central position in today’s critiques of social injustice. And in this time in history, class disparity, as we know, is deeply intertwined with racial injustice.

I think it’s this class awareness that makes this album so relevant. Not to say that the older music is not also infused with black working class musical tradition or class consciousness. And don’t get me wrong; revisiting the old Stax records is still a deeply satisfying experience, but this newer album is very current. For example, the Civil Rights era song, “We’re Gonna Make It,” (lyrics here. Sorry, no video, but you can listen here at about 25:30) is all about survival in dire economic straits—and the need for love and solidarity in these times. It starts out, “We may not have a cent to pay the rent/But we’re gonna make it, I know we will/We might have to eat beans and rice every day/But we’re gonna make it….” It goes on to include what one could read as a reference to the recent housing crisis: “We may not have a home to call our own/But we’re gonna make it….” There is no mention of God in this song, but there is a call for collective faith of a sort. Not a faith, I think, that transcends material circumstances, but one that is rooted in them.

The old Credence Clearwater Revival song, “Wrote a Song for Everyone,” is also very fresh in this context:

This song merges the old and new in ways that resonate today. For example, it references old oppressions and the way they manifest themselves still: “Saw the people standing thousand years in chains/Somebody said it’s different now, but look it’s just the same/Pharaohs spin the message ‘round and ‘round the truth.” The song’s references to Vietnam fatigue also ring true: “Saw myself a coming, county welfare line/I was feeling strung out, hung out on the line/Found myself a going down to war in June/What I want, all I want, is to write myself a tune.”

It’s a rousing, soul-stirring record. Though images of a male god—this being a traditional musical form—pervade it, I would by no means call it anti-feminist. As you can see from the sampling of songs I’ve included, Staples herself figures prominently. She is not looking to a savior-figure to make things better, but asserting—as in “I Belong to the Band” (lyrics here)—that there is “good news” to be had still, both on earth and in a spiritual realm, and that it belongs to everyone. In a nod to the centrality of class struggle to this record, she alternates back and forth between the lyric, “What kind of band you talking about?/Talking about that Christian band” with “union band.”

It’s impossible to listen to this record without finding solace. I’ll leave you with “I Belong to the Band”: 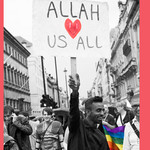 by Sarah Harvard
Queer Muslims have the difficult job of figuring out how to advocate for themselves and their communities.