Preacher's Daughter: Jenny Lewis on the Absence of God

I have never understood why reporters so rarely ask Jenny Lewis about the rich religious critique that has pervaded her work since the earlier days of Rilo Kiley. There is just so much there. I think I will scream if I hear another reporter ask her what it’s like to look hot in indie music, why Rilo Kiley really broke up, and whether or not her indie purist fans think the country album/major label/Jenny & Johnny project was a sellout.

The first song is about the simplistic way in which serious political issues are broken down and consumed in popular culture. That is, the moralistic framing of issues like war and peace obscures deeper analysis and makes us hypocrites. The second verse makes this clear, as I think the last two lines are meant sarcastically: “But it’s a jungle when war is made/And you’ll panic and throw your own shit at the enemy/The camera pulls back to reveal your true identity/Look, it’s a sheep in wolf’s clothing.” I always think of the repeated line, “It’s a holiday for hanging,” when I see a deposed leader’s remains displayed in the news media as spectacle and celebration. Then the last verse seems to be about both political and religious hypocrisy:

Any fool can play executioner for a day/And say with fingers pointed in both directions/’He went that way’/It’s only a switch or a syringe/I’m exempt from eternal sins/But the pardon never comes from upstairs/They’re always a moment too late/But it’s entertainment/To keep the crowd on their toes/It’s justice and we’re safe/It’s not a hit but a holiday.

Ultimately, then, religion can be manipulated in the name of political causes that, whether good or bad, are not innocent. Whatever the complexities, it all gets consumed as entertainment: War as reality TV.

While “It’s a Hit” is about the hypocrisy of a culture, I think “The Absence of God” is about what happens to a diverse range of individuals for whom god is literally absent. “The absence of God wil bring you comfort,” the song begins. And it’s not as if there’s no conflict or disagreement without god since “we’d still be ruled by our dueling perspectives.”

“Rob,” the song goes on, “says you love love love/And then you die/I’ve watched him while sleeping/And seen him crying with closed eyes.” I think the meaning here is purposefully ambiguous. At one level, Rob weeps “with closed eyes,” like a believer conducting an emotional prayer; I think this suggests that his interior life is just as rich and meaningful as it could be with god. But the weeping may also hint at some kind of disappointment with the feeling that death marks the end.

Friend Morgan meanwhile “says maybe love won’t let you down/All of your failures are training grounds.” She believes that hard knocks ultimately bring salvation: “And just as your back’s turned/You’ll be surprised, she says/As your solitude subsides.”

But the absence of god, as the song makes clear, also leaves room for personal choice: “We could be daytime drunks if we wanted,” she notes. The absence of god means a degree of personal freedom that would not be possible with god, and it’s up to us to figure out what we believe and how we should live.

If religious themes were frequent in Rilo Kiley’s work, they emerged even more prominently when Lewis stepped out on her own as a solo artist. On the 2006 release, Rabbit Fur Coat, Lewis teamed up with the Watson Twins to release a gospel-tinged album that continued to ask questions.

In “The Big Guns,” Lewis take on the theme of betrayal, seemingly alluding to the figures of Jesus and Judas Iscariot: “Then you kiss his lips/ He forgives you for it/He forgives you for all you’ve done/But not me, I’m still angry.” I think this contrasts a very normal human reaction to betrayal with Jesus’ forgiveness of Judas, who betrayed Jesus with a kiss.

“Rise Up with Fists!!” is another fascinating song. I’ll post a video here because I think it highlights the song’s tongue-in-cheek tone:

I’m particularly partial to the rather straightforward verse on religious hypocrisy: “It’s hard to believe your prophets/When they’re asking you to change things/With their suspect lives, we look the other way/Are you really that pure, sir?/Thought I saw you in Vegas/It was not pretty, but she was…”  Then, in perfect harmony, the Waton Twins chime in to finish the phrase with, “Not your wife.” Plastic surgery is then juxtaposed with religious faith, both conceived as salvation via cosmetic quick fix.

“The Charging Sky” has a similar mocking tone, now directed at people who pursue faith as a form of insurance: “And it’s a surefire bet I’m going to die/So I’m taking up praying on Sunday nights/And it’s not that I believe in your all might/But I might as well/As insurance or bail.” This mindset seems to facilitate what she critiques next—faith as capitalist vehicle: “But what if God’s not there?/But his name is on your dollar bill/Which just became cab fare/For the evangelists, the communists, the lefts, and the rights.”

But the mocking tone is not found in every song. I understand this album as a genuine engagement with the frustrations and questions that any thoughtful person with—or without—faith must engage. “Born Secular” is probably the most gorgeous song on the album, and it is certainly one of the most heartfelt:

I love the plaintive cry of this song. I am not entirely sure what it means, but I suppose it is, at least partly, a recognition of the way that god—whether “real” or not—permeates culture for better or worse. The pervasiveness of god forces even those without faith to grapple with the questions it raises. The narrator may want to believe, but does not feel the presence of god that others describe. Instead, she has to come to terms with god’s role in her own life—that of absence: “I was born secular and inconsolable/I heard that he walked, he walked the earth/God goes where he wants/And who knows where he is not/Not in me.”

I have always loved Rilo Kiley and Jenny Lewis because of their ambiguous inclusion of religious themes, references, etc. As someone who grew up very involved in the church and who has only recently left that behind, I find a lot of comfort in Jenny's lyrics. I remember reading an interview in Nylon magazine when her first solo album came out and if I recall correctly, the interviewer did ask her about the religious aspect. I can't for the life of me remember her response though!

P.S. I have really enjoyed your column in general. It is refreshing to read about christianity/god/religion through a feminist lens without mockery or hatred.

Good post. I've long wondered at the lack of decent discussion of this myself.

"The Absence of God" is one of my favourite songs ever, and it's interesting because at first I thought the whole "Rob says" "Morgan says" was just hipstery winking at her friends, but then I thought that you can also read as about invoking community - that there's a shift from the transcendent G_d to the imminent bodies of the people we care about, in daytime drinking rather than church.

Very smart analysis, I think Lewis is one of the smartest songwriters out there, and she has a lovely voice. One question,can anyone tell me what the full narrative of the song RABBIT SKIN COAT is about? I tried to puzzle that song out many times, but I always seem to lose the thread...

<p>I think she has said that it's about her childhood - growing up as a child actor and her relationship with her mother.</p> 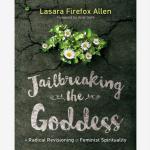 by Heather Seggel
Jailbreaking the Goddess addresses the many women who don't feel represented in the more well-known, threefold maiden/mother/crone model.