Preacher's Daughter: Mourning and Spirituality in Steve Reich's Response to 9/11

Whenever something significant happens related to the events of September 11, 2001, I notice a dearth of empathy on the (secular and religious) left. It’s as if some leftists think we can’t mourn the deaths that happened on US soil without undermining our disapproval of US foreign policy or our disapproval of Islamophobia. Or we can’t grieve the losses without indulging American exceptionalism. Over the weekend, I saw things like this and this and this posted all over the social networks. I often sense the implication that the 3,000 who died deserved it in some way, for daring to work within the confines of such a garish symbol of capitalist excess as the World Trade Center.

The right often goes to the other extreme, indulging simplistic nationalisms and mourning only those lost on US soil. Either way, we leave a significant number of dead people outside the realm of our compassion.

Responses to September 11 have been fraught from the start. As I thought through the problem of grief over the weekend, I was gratified that NPR posted the new work by minimalist musicians Steve Reich and the Kronos Quartet, WTC/9/11. Here’s a sample:

I like Reich’s work because I think it takes us beyond the kinds of politicized excess that can suffocate our capacity for compassion. Instead it reminds us that mass murder is horrific even if it is employed to justify more violence.

The album opens* over the beep of a phone as recordings of  first responders report what has happened. “They came from Boston,” a man says, and at the end of each spoken phrase, the note of the speaker’s last uttered syllable is drawn out by a stringed instrument to layer the piece. “A plane just crashed.” “I’m trapped in the rubble.” “I can’t breathe.” “A second plane just crashed.” The idea, Reich says, is to build layers of instrumentation to capture the tenor of that moment in time.

In the second movement, Reich samples interviews conducted with people years after the attack. Now the voices are subdued, hushed: “I was taking my kids to school.” “We all thought it was an accident.” “I knew it wasn’t an accident right away,” says one woman. Under their voices, the music is soft, quiet, something like a funeral dirge.

As memories of the trauma build, the voices and music become more emotional, harsh: “Everyone was running and screaming.” “People jumped from the building.” Then the sounds grow somber again, as voices assess what has happened: “Everybody thought we were dead.” “Just dust in the street. Just dust.” “What’s gonna happen next?” Over the speakers, the music reflects the numbness and uncertainty that some bystanders felt. Bursts of swelling, anxious sound are juxtaposed with slow, plodding music.

Finally, in the third movement, spiritual questions that so often come to the fore in times of great tragedy emerge. Reich explores the actions of a group of women who came to the place where bodies were being held for identification to ensure that—in keeping with Jewish tradition—someone was with them from the time of death to the time of burial. The women came in shifts for seven months.

Again, the music is slow and funereal, backing the sound of women’s voices singing mournful psalms. One woman says, “I would sit there and sing the same psalms all night.” Why does horrible human tragedy so often seem to bring us into closer proximity with some kind of spiritual realm?

It’s a beautiful, moving and startling piece, and one that raises interesting questions from a feminist perspective. In particular, why are only women associated with the divine? It’s an old stereotype, that women are more in touch with the spiritual than men. Women sing psalms, but a man’s voice brings us into the grounded present: “The world to come,” he says, “I don’t know what that means.” Their voices are soft and ephemeral; his is assertive and straightforward even as it expresses uncertainty.

In that final movement, the material and spiritual merge. Women sing songs that reach for the heavens while a man’s voice deploys spiritual language—”the world to come”—to situate us within the material realm, where we have to admit that the future will be different in some unknowable way, perhaps both personally and politically. In many ways, I think we in the US and elsewehere are still wondering what that “world to come” will be.

*The music can no longer be heard on NPR, but the first three movements that I discuss here are on Spotify (WTC/9/11 EP). 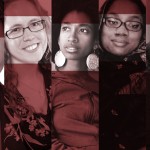