Preacher's Daughter: Are There Progressive and Feminist Voices in Country? | Bitch Media

Preacher's Daughter: Are There Progressive and Feminist Voices in Country?

A couple of commenters have raised questions about progressiveness in country music. Today, I want to suggest that there are progressive voices, at least in Americana, roots, and alt country music, but those voices are limited. They are almost always white, and usually populist and male. There are a few women in country who arguably identify as feminists. None of these artists are evangelical Christians like some major label country musicians, but faith imagery permeates much of their songwriting. It is often used in visions of a Utopian future, or it takes on a perverse meaning.

One songwriter in the genre, Lucinda Williams, has said, “I consider myself a feminist who is very interested in the politics of relationships.” But she also deals with collective social behavior. Her song, “Atonement,” covers religious coercion in an abusive pentecostal church:

Country musicians with a liberal-populist perspective are nothing new. Johnny Cash, Waylon Jennings, Willie Nelson, and Kris Kristofferson brought this sensibility to country music as individual stars and, later, as members of soupergroup, The Highwaymen. All maintained an anti-establishment perspective called Outlaw Country.

Many men continue in this tradition, which often celebrates a deeply masculine ideal. John Fogerty has written songs that seem to embody the masculine Outlaw Counrty sensibility since he started with Creedence Clearwater Revival. And his 2008 solo track, “Gunslinger,” is a good example: “I think we need a gunslinger/Somebody tough to tame this town/I think we need a gunslinger/There’ll be justice all around.”

This music often celebrates working-class folk heroes like John Henry, said to be a former slave and steel-driver who led his work crew to out-race steam-powered rail. In “Looking for a Job,” Todd Snider rails against abusive employers: “You can’t talk to me like that, boss/I don’t care who you are/If you don’t want to have to hang your own drywall/Don’t push me too far.”

Steve Earle combines working class sentiment with anti-war critique, as on 2004’s “Rich Man’s War,” which characterizes both a US soldier and a Palestinian suicide bomber as “just another poor boy off to fight a rich man’s war.” Earle’s 2002 track, “Jerusalem,” deploys religious imagery as commentary on the Palestine/Israel conflict, looking forward to another day when “all the children of Abraham will lay down their swords forever in Jerusalem.”

But what about feminist voices in this music? There are some. For example, Neko Case’s 2002 track, “Pretty Girls,” casts the punitive religion of anti-choice protesters and media against young girls waiting alone for abortions in a Planned Parenthood clinic: “The TV is blaring and angry/As if you don’t know why you’re here/Those who walk without sin are so hungry/Don’t let wolves in, pretty girls.”

Anaïs Mitchell is a lesser-known artist whose 2010 release, Hadestown, deploys the vocals of Justin Vernon (of Bon Iver), Greg Brown, Ani Difranco and others. The sweeping “folk opera” is based on the Orpheus and Eurydice myth. It combines different Americana and country styles and serves as commentary on contemporary issues like US immigration, working class struggle, religiously motivated bigotry and yes, gender politics.

“Gone, I’m Gone” is a short song about the sacrifice and suffering that love brings. It opens with a plea voicing Eurydice’s devotion, but laments her physical suffering and hunger. Ultimately, she has no choice but to descend into the underworld. As she goes, a trio of Fates warns the audience against judging Eurydice: “Go ahead and lay the blame/Talk of virtue, talk of sin/Wouldn’t you have done the same?/In her shoes, in her skin.”

The music also comments on the challenges that Persephone faces as the abducted queen of the underworld. “Our Lady of the Underground,” voiced by Ani Difranco, emphasizes Persephone’s power as well as her limitations:

Persephone’s oppression is further explored in the exchange she has with Hades (voiced by Greg Brown) in “How Long.”

And my favorite song on the album, “Why We Build the Wall” is a haunting call-and-response number about labor and isolationism in the underworld and the US:

There are other examples of feminism in roots music, but fewer examples of queer representation in the genre, or people of color. The next post will cover some of the identities that are so often excluded from this tradition. First, I’ll offer analysis of the work of the Carolina Chocolate Drops, black performers who in some ways push against white supremacy by transforming the traditionally racist music of minstrelsy. I’ll also highlight some lesbian artists who are breaking through in the genre without being relegated to the realm of stereotypical “Lilith Fair music.”

This is my favorite series Bitch has done in a long time! Thank you. I look forward to reading more!

I agree, one of my favorite series! Thanks for the great tunes!

Thank you both. That is very kind.

Relevant: “Underground,” Slavery, and the Meaning of Reproductive Justice 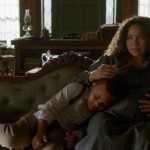 by Jordan Taliha McDonald
Black mothers have been forced to make difficult choices during and after slavery.