Sadly, $pread, the all volunteer-run quarterly written by and for sex workers, posted yesterday that they can no longer sustain their magazine:

We regret to inform you that...$pread will close its glittery doors soon after the dawn of the New Year...We apologize for those of you who have only recently come to know us, and to all our longtime supporters. After all these years, five all-volunteer years to be exact, we have come to the conclusion that an all-volunteer magazine is simply unsustainable in the current publishing climate. Short of a donation of $30,000, we will be unable to sustain the magazine past January.

They will be publishing the next two issues: Crime and Punishment (5.4) and the Race Issue, edited by sex workers of color (6.1). And there are plans to do a best-of book anthology of $pread's five years as well as a "$pread Scrapbook" of tips and resources for starting your own magazine on sex work "in the hopes that our model will help motivate the continued movement for social justice among our many and varied communities, in the same way Danzine inspired our own publication."

And hopefully the torch will pass--$pread was a much-needed medium that centered the voices of people typically misrepresented and silenced in other media. With features like the "DC Madam" telling her own story, personal accounts of being a mother and a sex worker, and dispatches from around the globe (along with reviews of movies, books, fashion, lube, body glitter, etc...), $pread was able to capture the diversity of experiences for those working as escorts, porn directors, dancers, strippers, activists, and more. For those outside the sex industry, the stories and advice in its pages were far more informative about the nuances of sex work than the common pro/anti theorizing that favors some moral (or feminist) righteousness instead of the lives and experiences of sex workers themselves (in a recent interview with Mother Jones, $pread's editor-in-chief Will Rockwell says the only time he's felt exploited as a sex worker was by the media).

Bitch Media knows firsthand what its like to struggle as a non-profit, feminist, print publication, and are sad to see another independent and necessary medium close their doors. (You can read $pread's co-founder and editor Rachel Aimee's interview with Siobhan Brooks on race and sex work in the new issue of Bitch). Show your support by pre-ordering the next two issues and picking up merch and back issues at $pread's online store.

$pread was motivated by the motto "Illuminating the Sex Industry." We submit these five years of blood, sweat, and tears to you as a testament to this founding sentiment. May the struggle to end the stigma, discrimination, and violence perpetrated against our communities end in justice, and may the flashy strobe light of sex worker rights never go out, but illuminate the sex industry for the world to see.

"R.I.P. $pread" [$pread]
"It's Not Selling Your Body, It's More Like Controlled-Access Rental" [Mother Jones]

This magazine opened my eyes to so much about the sex industry that I otherwise wouldn't have been privy to, or privileged to ask about it. Compassionate, thoughtful writing defined every issue, I am unbelievably sad to hear this news. Thanks to all the courageous writers and awesome volunteers who put this magazine together issue after issues; your work was appreciated beyond measure and will never be forgotten!
Save $pread anyone? I'll lend my pugs to the campaign this time...

Thats a fucking horrible shame, because I'm loving that cover. Everything wrong with mainstream media slapped back into it's face in one bird-popping finger. NICE!

At first I saw this article and I was like "Meh, doesn't apply to me." Then I thought about it and realized one of my good friends works in the sex industry; she's a stripper. And everyone has their preconceived notions of who a sex worker is and what she/he looks like and where they come from.... and quickly realize they're wrong. My friend in particular is college educated. She's trying to put her way through law school and found that this makes her money, keeps her in shape, and really, makes her feel better about herself. She's not "My friend the stripper", she's "my friend." And it's really disheartening that a magazine that really tells it like it is, i.e., people in the sex industry are real people, it's a shame that it's closing up shop. Hopefully the negative stereotypes about sex workers will continue to be eradicated in years to come.

Relevant: This Ombud’s For You 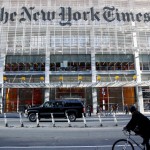 by Andi Zeisler
Right now seems like an especially weird time to get rid of a first-line advocate for media transparency.