“Pride” is a Joyful Film About the Need for Unlikely Allies 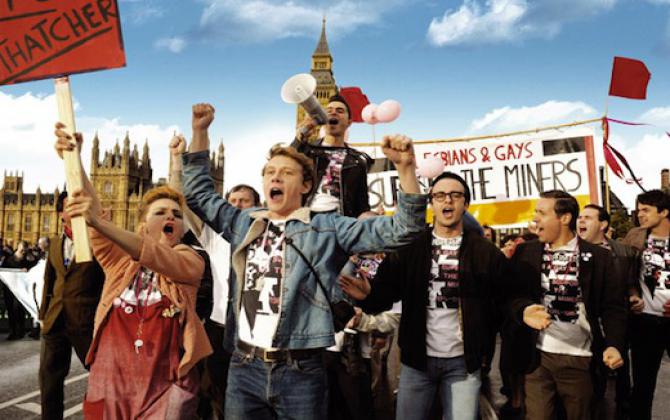 The premise of Pride sounds like a slog: the film by British director Matthew Warchus follows a London gay and lesbian group’s fundraising campaign for mine workers who are in the midst of the nation’s longest-running strike. But instead of being a gray grind, the movie is a joyous parade. With a strong cast, a quick-moving script, and a fun soundtrack that beats through the film, Pride feels like an upbeat musical—even the most cynical viewer will find it hard not to get goosebumps as the unlikely allies pull off a rousing rendition of “Solidarity Forever.”

The film starts with bright-eyed-and-bushy-tailed young activist Mark (Ben Shnetzer) in 1984, watching a news clip about the miner’s strike from a drab London flat. He’s immediately inspired to rush out the door in his jeans and black leather jacket to start collecting money for their cause—despite the fact that working-class miners have a reputation for being hostile toward anyone who even looks a bit like a “poof.” At an impromptu political meeting after a late night of partying, he points out to a cadre of skeptical queer friends that the police and Margaret Thatcher’s government are bullying the striking miners—and gays and lesbians know first-hand what police bullying is like. “What’s the point of supporting gay rights and nobody else’s?” he argues. Mark’s charisma wins out and a motley crew of comrades joins the cause.

Everyone say “Lesbians and Gays Support the Miners!”

Before long, the crew is off on a roadtrip in a giant rainbow-painted van to a grim, desperate mining town in Wales—the only miners’ association that will accept a check from “Lesbians and Gays Support the Miners.” There, they find support from a sweet-and-steely stay-at-home-mom named Marion (the absolutely great Monica Dolan), a sweater-vested local leader, and numerous endearing elderly people who wear a lot of tweed. Of course, the incoming crowd of lesbians and gays is not universally embraced. The villains in Pride come in the form of a family with wicked bowl cuts, who scheme from their living room about how the impression of accepting support from “perverts” will ruin the strike. But in a refreshing bit of scripting, the London gays don’t swoop in to teach the small-towners about tolerance—the locals speak up for themselves about the need to accept and appreciate diversity. While the more close-minded individuals in town sneer at being friendly with the queer crowd, one of the town’s leaders delivers an eloquent little speech, “When you’re in a battle so much bigger than you, to find out you had a friend you didn’t know existed, that’s wonderful.” 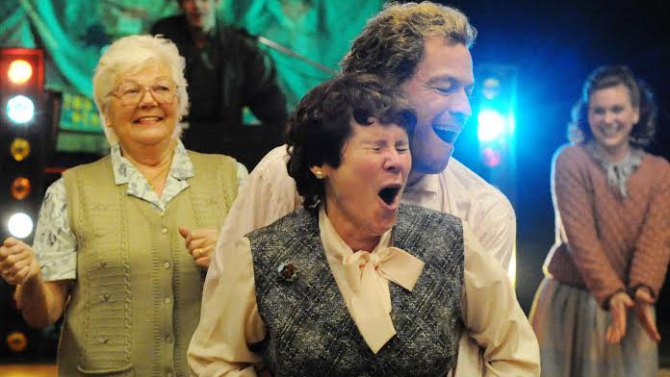 When the Donna Summer tunes heat up the union hall, the whole town turns out to dance.

Pride lingers on the warm human moments of campaigning for an underdog cause. Meanwhile, all the hard work is done in montage. The hours of fundraising, the freezing cold picket lines, the scenes of a young activist coming out as gay to his angry parents, and mind-numbing strategy meetings alike are glossed over in lighting-fast flashes. That makes this film more of a go-get-em-tiger inspiration story than actually educational, but it’s also necessary for focusing down a story that could easily bloat with too many characters and complicated political drama. All the sex and violence happens off-screen too, making this a light, family-friendly movie that could easily be shown in junior high schools.

As it is, Pride feels tight, building to a crescendo as the miners’ union holds a vote on whether to continue taking the help of Lesbians and Gays Support the Miners while, for their part, the London crew throws a salacious fundraiser party called Pits and Perverts. As the story moves along, almost every character gets their own time in the spotlight—there are too many moments of triumph to count and gobs of heart-warming vignettes. In one of my favorite moments, a buttoned-up elderly man in the mining town and his wife are busily making sandwiches when tells her he is gay. She calmly replies that she’s known for years and they go on as before, spreading margarine on loaves of white bread for the strikers.

These golden moments make Pride hit home even as it sings along a bit too joyfully about a dark and complex time.  As David Denby noted in his New Yorker review, while the cause of gay rights has become more celebrated since the 1980s, unions have suffered the opposite fate and have continued to lose power. “Solidarity rarely outlasts the grinding movements of money and power,” writes Denby. In the end, Pride is told with a happy ending. Along the way, every character finds something to cheer for.

I agree that it's a joyous film, and I laughed and cried at all the appropriate places however I had a number of concerns from my queer and feminist perspective. In a film that was about progressive politics I was really shocked at how poor its portrayal of the politics of gender and sexuality was.

For example, two of the women in the LGSM want to talk about having a womens collective in group, and are told by men that there’s no point, not given a chance to speak after being asked to explain why they want it and then they disappear from the film. Also the other women in the scene is then made to chose – by the men - whether to side with the other two women or with the men, and it’s not really a choice. Interestingly, the character who “chooses” not to be ostracised from the movement, then also becomes an almost sexless character. I find it interesting (?) that in order to be part of the “in crowd” of queer men she has a persona that involves her eschewing relationships/other women. It’s like if there are too many women in the group the boys would feel left out. And by too many, they obvious mean, more than one. Oddly there’s soon after a scene in which the Welsh women talk about the strength they’ve found together – although their “purpose” in working without men is to support the men, not potentially be living a perfectly fine life without men in it at all.

In the "Pits and Perverts" scene we see two straight couples kissing in the middle of the screen, but when the young man who is the main character finds another young man to kiss it happens almost of screen - and in the dark! We see plenty of shots of straight couples in all sorts of intimate positions (not sex, but in bed together etc) while the only way we know queer couples are couples is because we're told they are - or are left to infer it from the fact they're living together. Ok, I’ve remembered that there was a scene of two queer men talking in bed, mirroring straight couple scenes, and Stella and Zoe (?) were often quite lovey-dovey, but I think that with them it was because they didn’t have any lines and had to have something to do.

Most characters got a chance to shine and have a bit of their own story told, but all we get for Steph is that her mother lives a long way away, and she says something self deprecating about how she's single. There’s absolutely no character development for her at all through this experience. On the other hand, the queer men come out to parents, reconnect with parents, find their political voice, make friends in unlikely places...

Everyone who’s not straight is apparently “gay or lesbian”. There are no scales or spectrums here. I get that in terms of presenting a united face to an unknown community using words that the “others” might understand is a valid tactic, but could they have discussed this amongst themselves to show the audience why no one ever identifies as bi, queer, gender-queer? 1985 isn’t that long ago; these concepts existed and people identified with them – at least amongst their own community. Also, the film might be set in 1985 but it’s made in the 21stC and to me the constant use of the phrase “gay men and lesbians” was pretty jarring.

And, one that really annoys me - Joe is pretty much told that he should give up on his family and move out. There's no discussion of the practicalities in that: move to where? Where will money come from? What if he has younger siblings he wants to stay in touch with? What if he wants to continue his education (did that cost money in the UK in the 80s?)? I think it's really awful to have the defining moment for a young queer character be when he walks out on his family, but to not show anything about what happens next. It seems particularly odd in film where another character's story has been about reconnecting with a family he walked away from, and that place can be part of identity, and that identity can be about more than sexuality - and it was a film about people overcoming prejudice, and that sometimes prejudice is assumed but doesn’t really exists - and yet Joe is pretty much told by his "friends" that he's weak for staying living at home. I mean, I do get it - I was one of those kids who got as far away as I could as soon as I could - but the film doesn’t show Joe having any real desire to do that other than his new friends seem to think he’s weak if he doesn’t. It would have fitted with the film much more if he applied what he learnt in Wales at home and built bridges with his family. I mean, his family - and Margaret Thatcher - are the only people presented in the film as having no humanity! Even Maureen, the bigoted miner’s wife, was seen to be an understandable character, if not sympathetic one, as we got to understand her motivations.

While I’m at it, the other thing that makes me so mad I could walk out of a film, is the whole thing where someone comes out to someone who says, “I knew that.” Well what sort of a fucking friend were you if you’ve left this person to feel scared, alone, vulnerable all these years and never done anything to make them aware that you might-sort-of know! That is not how you support a friend! The whole “keep on making sandwiches” thing is such a straight person fantasy: trying to be all “life goes on, sexuality doesn’t matter, yahdeyadeyah” – life is never ever ever the same for a queer person after they first use those words. Sexuality was a big fucking deal for that man. That was a huge fucking moment for him, and that women just ignored it, and stepped all over him by saying that she “knew”.

What really made me happy was the unionism! While it was still in the theatre I nearly called out about supporting the local public service union which is being lied to etc by the government. Also that it didn’t seem to one sided in who needed who's help - it wasn’t a bunch of straight people swooping in and making the sad gays happy.

Overall I liked it, but was disappointed that something that so many people laud as being “progressive” had amazingly unprogressive queer and feminist politics - and that so few people seem to have noticed.