The primary's a week from tomorrow... | Bitch Media

The primary's a week from tomorrow...

I've never been undecided this close to election day before.

Then again, I've never been making a choice that felt this important before, either—nor, with the exception of my very first presidential election, in 1992 (before the Bill Clinton of the campaign became the Bill Clinton of "don't ask, don't tell" and "end[ing] welfare as we know it"), have I cast a vote without a) a sigh of resignation that I'd picked the lesser of the evils or b) a sigh of resignation that I was doomed to a protest vote yet again. (And since Kucinich just dropped out, I don't even have the protest vote option this time around.)

No, this time I've got to make an actual difficult and potentially meaningful decision. And each candidate actually has something really exciting to recommend hir: fiery populist rhetoric; seriously inspiring charisma; a raft of plans for healthcare, the environment, the war; or some combination of the above. I'm going to be (dare I say it) pretty happy to vote for whichever one ends up in the general election (though maybe that's just my seven-years-of-Bush hangover talking).

And yet, each one also disappoints in some pretty serious ways. And that's why I can't make up my mind. I've been wary of Hillary since the early days of her Senate career: the Iraq votes, the centrism, the trademark Clinton triangulation. Viewed from some angles, Edwards's views seem closest to my own, and then I see him at a debate, smarming all over the place about how personally he takes it and disingenuously promising that he will single-handedly blah blah blah, all while gloating over his rejection of lobbyist money as if federally registered lobbyists were the only people who ever sought to buy influence with campaign contributions. I want to vote for him for his focus on poverty, but I can't get around the fact that I just don't think he's remotely trustworthy. Obama inspires genuine hope for progressive policies, and then I remember that, as the Nation's Max Fraser put it recently, "On domestic issues like healthcare, job creation and energy policy, Obama is staking out a position to the right of not only populist Edwards but Clinton as well."

And then there's the elephant in the room (which isn't such an elephant anymore, thanks to campaign ridiculousness). I've been talking and writing (more talking than writing, unfortunately, but that's a topic for another time) for years now about how the intellectual legacy of gender essentialism is too influential over current feminist thought and action. I don't believe that female leaders are automatically any better for feminism because of their gender. Female parts without feminist principles get us nowhere; ditto brown skin with racist attitudes.

I want nothing more than to vote free from identity politics (especially since, as a white woman, I might be voting my race as much as my gender with a Clinton vote).

But...(or is it "and"?) [please imagine a looooong pause here], as I told Lakshmi Chaudhry when she interviewed me last summer's kick-ass Nation piece about feminists and Hillary, I'm finally being given a chance to vote for someone who's not a white guy. Am I really going to get in that booth and pull the metaphorical lever (why doesn't "touch the screen" sound as good?) for John Edwards? Really? As I also told Lakshmi, no matter how I feel about Hillary, I would certainly have an emotional reaction to her candidacy. And indeed I have; I'm embarrassed to admit it, but I actually felt moved by the New York Times's endorsement last week. Fitness for the commander in chief title couldn't be further from my primary candidate-assessment metric—and Hillary's positions on the war make up the lion's share of the basis of my reluctance to vote for her—but in a time when female politicians for pretty much any office still have to zealously guard against any hint of "overemotionality" or "weakness," reading a sentence like "She would be a strong commander in chief" in the paper of record produced an actual visceral thrill. And part of me (just part, okay?) wants to vote for her in response to all the horrid sexist commentary and the supposedly progressive blogosphere commenters who delight in every campaign setback by saying things like "Ding dong the witch is dead."

So, given all this—and the fact that, when you look at the programs they're proposing, what you learn, aside from that Obama has by far the best web designers and copywriters, their similarities dwarf the differences—well, oy. Like I said, I'm totally, completely, 100% undecided.

Thanks for your sharing this information 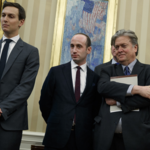 by Andi Zeisler
Do we really need to know the history of and justifications for someone’s beliefs or actions to understand that those beliefs and actions are objectively bad?