Priyanka Chopra and the Problems With "Exotic" | Bitch Media

Priyanka Chopra and the Problems With “Exotic” 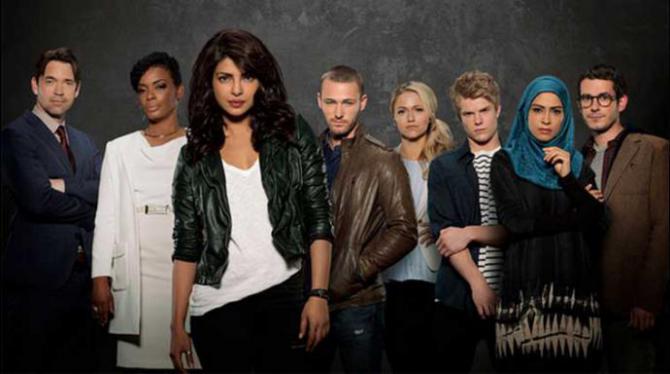 Indian actress Priyanka Chopra is marking her American debut with ABC’s new series Quantico, which premieres this September. On the drama, Chopra plays a half-Caucasian half-Indian woman named Alex Parrish who is an FBI trainee at Quantico base, Virginia.  As the series trailer shows, after acing her initial training, she falls under investigation for a terrorist attack.

I’m hoping that 2015 is the year that Priyanka Chopra, 32, becomes a household name in the US. Chopra is a talented actress and, from its cast and trailer, Quantico looks like a welcome counter-point to the predominantly white, straight shows that dominate primetime. Plus, it appears that Chopra’s character on the show is complex. In the trailer, Alex Parrish isn’t just a “badass FBI agent.” She comes off as empathetic and competent as well as tough and she expresses her sexuality confidently.

While she’s new to American audiences, Chopra is relatively well-known elsewhere in the world. She began her acting career after she won the Miss World pageant in 2000. Since then, she has acted in over 40 Indian movies and recently, has had great success as a singer—she has three hit songs and sings in English, Tamil, and Hindi. While there’s a lot going on for Chopra, some of her past work has been complicated when it comes to perpetuating the stereotypes associated with South Asian women.

In the interviews about Quantico, Chopra has made clear that she did not want to play the role of the “Indian princess” or “some exotic looking snake-charmer.” So, when ABC offered her the role of an “ethnically ambiguous” FBI agent, she grabbed the offer. “I mentioned that the fact that I am an Indian should have nothing to do with the story, cast me an actor,” said Chopra, in an interview with Lee Hawkins for the Wall Street Journal.  “I play an FBI agent and the story has nothing to do with my big family or me wearing henna or any of those stereotypes.”

But, is playing the role of an ethnically ambiguous character enough to break the stereotype? As the trailer reveals, Chopra’s character quickly winds up being accused of being a terrorist. I hope that the show grapples intelligently with the ethnic stereotypes around who comes under law enforcement suspicion for terrorism—if not, I’m worried Quantico will be just another predominantly white show where a brown person is portrayed as a terrorist.

Also, it’s interesting that Chopra spoke out specifically against being typecast as an “exotic looking snake charmer” because her rise to international fame has relied specifically on the word “exotic.” In 2013, she had a hit song called “Exotic”—it was produced by RedOne and features Pitbull and sold 130,000 copies in its first week. The video for the song focuses on a bikini-clad Chopra playing around in the water on a tropical island, giving sultry looks to the camera. She might not be running around the trees—quintessential of many female leads in mainstream Indian movies—but the video is pretty much a textbook example of “exoticized” sexuality.

The song is very straightforward, too. It’s hard to square Chopra’s recent interviews about not wanting to be pigeonholed as exotic with these lyrics from “Exotic”:

Having always had a disdain for the word exotic, the stereotype really hit home for me a few weeks ago when I posted a photo of myself on Facebook and someone commented saying that I looked “so exotic.” My first reaction was “Why the hell would someone call me that?” and that led to reading on the word’s etymology. There’s a lot of interesting literature around the word, but here’s a little snippet on its fairly recent use: To begin with, “exotic” is a term that one is technically supposed to use for animal and plant species, not humans. It is a word that has historical weight—exotic has long been used to define the “otherness” of “The Orient.” Edward Said, in his groundbreaking work Orientalism, defined “the Orient” as “almost a European invention… a place of romance, exotic beings, haunting memories and landscapes, remarkable experiences.”

In her video “Exotic,” Chopra delivers exactly that. Confirming to the norms and objectifying herself as an “exotic” woman does not help the women of color and particularly doesn't help women of South Asian decent. But more than that, “exotic” is also a micro-aggressive term—it feeds off how different that person looks. If you call someone “exotic” you are also, in a way, fetishizing them for not being white.

In this interview, Chopra says that she thinks of exotic as meaning just “beach, palm trees, margarita, and fried calamari.” But for a woman of color who has also talked about enduring racial slurs and being called a “browny” after she moved to the US as a teenager, that definition of exotic is a bit hard to digest. I think Chopra’s use of “exotic” speaks to how she’s driven to make a career for herself as a performer. Chopra’s disdain for being exoticised is commendable but what I really hope for is that the enthusiasm she shows toward breaking stereotypes goes beyond mere lip service. I hope that in the future, she doesn’t jump at every opportunity that comes along her way, like the music video where she successfully sells the idea of the “exotic Desi girl” to an international audience.

On the one hand, she’s just an individual actor and a woman of color in a predominantly white, male-dominated industry. She’s trying to make a mark. On the other hand, “Exotic” affirms a deep-seated ethno-cultural fetish. And that I think cannot be discounted. In her recent Wall Street Journal interview, Chopra spoke up for better Indian representation in American pop culture: “You see Rihanna from Bahamas, you see David Guetta from Europe, why can’t we have somebody in American pop culture from India?” Yes, we need more South Asian representation but it is also important to realize the prevalence of pre-existing stereotypes that ail the ethnic presence in the western world.  To put it simply, as Chopra points out, “Everybody doesn’t speak like Apu from The Simpsons. We all don’t smell of curry. We all are not ugly-looking nerds.”

So as much as we want to see Indian actors representing India and breaking stereotypes in American pop culture, what we don’t want is to be exoticized. I hope that’s the mentality that Chopra brings to Quantico—and that the show finally offers her an opportunity to show off her profound acting talents, rather than just showcasing her looks.

Related Reading: The First TV Drama About an Arab American Family Debuts—And It's Got Some Problems.

1. Make all the Asian men evil. In many cases, make Asian men violent, misogynists, or rapists. Never mind in real life white men is 3 times more likely being rapists than Asian men.
2. Make exotic hot non-white Asian female's role that rebel against her culture and parents
3. Make white male the love interest and how he is the better "fit" for her vs. men of her own culture

Hollywood would never put an Indian guy as the new agent and have a white woman playing his love interest. No, it is all about the white men getting the exotic women.

Read here about yet another micro aggression against Asians along with many, many other examples already on TV today: http://www.kulturemedia.org/entriesdetails.php?iid=178

Hollywood need to stop its daily white male supremacy propaganda. Public needs to know and this s**t simply is getting old and tiring.