Pro-Wrestling Fans Call Out How the WWE Treats Women 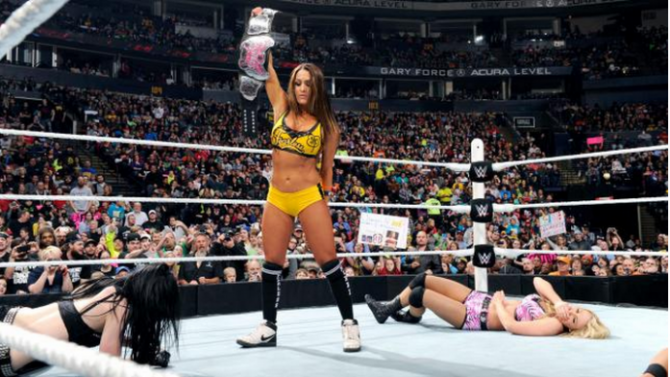 Nikki Bella standing with the WWE Divas Championship title after a match she didn’t even get to wrestle in.

In the world of professional wrestling, social progress moves at a glacial pace. It’s often hard to reconcile being a feminist with being a fan of pro-wrestling. But last week, fans spoke up for better treatment of women in the wrestling ring. During the live airing of Monday night show WWE Raw, fans called out how the show’s female wrestlers got measly TV times. Thousands of viewers jumped on the Twitter hashtag #GiveDivasAChance and they haven’t been silent since.

The problem in last week’s WWE Raw began when wrestler Paige entered the ring for a two-on-two women’s tag team match. Instead of going straight to the match, the show immediately cut to a commercial break and when it returned, WWE Raw aired a four-minute video retrospective on wrestling legend Sting (this guy, not the musician). By this point, Paige had been waiting close to seven minutes for the match to begin. Finally, her opponents Nikki and Brie Bella (collectively known as the Bella Twins—yeah, I know, just go with it) made their way down the ramp, and only when the cameras cut to the ring do we see that Paige’s tag team partner is Emma, who curiously had not received a standard big-deal ring entrance. Finally, they launched into the match, but fans were dismayed when the match ended thirty seconds after it began. You can see the video: the match begins at 0:19 and ends at 0:49. By the way, WWE Raw is a three-hour long show.

What makes this incident different from other times when WWE has neglected to showcase the athletic talent of its female roster? Signs point to a recent Bella Twins Q&A at Wizard World Indianapolis where they gave their thoughts on the current state of WWE’s women’s roster. Brie notes, “When it comes to [RAW], we get so frustrated because it’s hard to tell a story in three minutes.” It’s a safe bet Brie and Nikki are not the only women aware that compared to their male co-workers, their screen time is zilch.

Tensions between fans and the WWE mounted following the February 23 30-second RAW match when AJ Lee, arguably the most popular female wrestler on the roster, directed a series of tweets at WWE’s chief brand officer Stephanie McMahon and accused the company of wage inequality  in addition to sexism. Stephanie replied to Lee in a succinct and toneless manner, and WWE Chairman Vince McMahon took to Twitter the next day and assured fans their voices were being heard. But are they really?

It’s no secret among wrestling fans that WWE’s track record for engaging women-centered stories is questionable at best. As ridiculous as a 30-second-match sounds, it wasn’t too long ago when women were sometimes made to wrestle in their bras and panties (the PG rating adopted in 2008 has sinced outlawed such a gimmick, thankfully). But these days, WWE’s female characters are often given little-to-no character development and rely on three tired tropes: blandly nice, catty, or “crazy.”

When the WWE shows its audience that female wrestlers’ characters—and by proxy the female wrestlers’ matches—are not important, the audience unfortunately responds in kind. Go into the comments section of any women’s match on Youtube and you’ll see fans who detest women’s wrestling altogether. Then there are those who follow the women’s division but scoff at women who entered the company, not as previously trained wrestlers, but as swimsuit models or bodybuilders who learned to wrestle once signed. These women—the Bellas among them—are said to lack a true passion for the industry. But can they and other women grow to love their work and wrestle to the best of their ability when they’ve been set up to fail?

Perhaps the answer lies in the future. WWE NXT is WWE’s developmental system (like baseball’s minor leagues) where the emerging stars of the company learn to hone their craft before being called up to travel and entertain with the main roster. In NXT, women receive ample opportunities to tell stories, and their matches are often co-main events on NXT’s quarterly live specials. In fact, at NXT: Rival (the event Brie Bella mentioned at Wizard World Indianapolis), four women competed for the NXT women’s championship in a critically praised 12-minute match that had the audience on its feet. Clearly WWE’s women are capable of telling a good story—they just need a production staff and a crowd that believes in them and wants to watch them wrestle. Because while smaller companies such as Lucha Underground, CHIKARA Pro, and Inspire Pro Wrestling take strides to craft compelling stories for women, the onus for lasting systemic change falls on companies with a wider reach, and no company’s reach is wider than WWE’s. 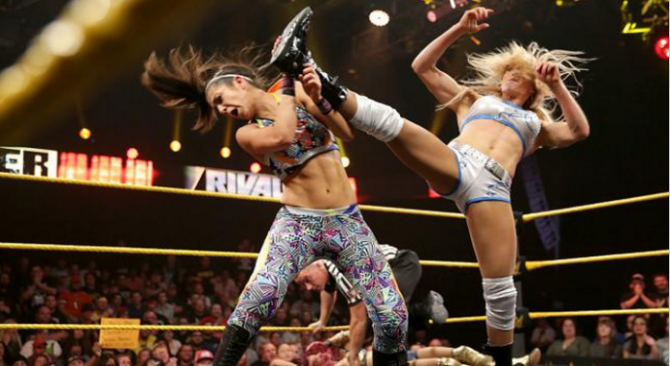 NXT women Bayley and Charlotte have shown how good WWE women’s wrestling can be.

Many important conversations concerning the state of WWE women’s wrestling need to happen: dissolving the “diva” label completely in favor of the term “superstar,” the term used to describe male members of the roster (or better yet, call all of them “wrestlers”); replacing the gaudy butterfly/labia-shaped championship belt with something more befitting—you know—a champion; creating entrance music that doesn’t center on their sexual availability; allowing them to compete for titles historically held by men; and, of course, ensuring that pesky little thing known as wage equality. Until the company gives its female talent equal screen time and interesting stories—and until it starts teaching its audience to think of women as people instead of objects—WWE may as well remain in the Dark Ages. In the meantime, let’s hope the fans who care about the women’s roster keep #GiveDivasAChance trending.

Ariana Vives is the new media intern at Bitch and wants to see Nikki Bella vs. Sasha Banks like no one’s business.

Kudos on the well-written article. You explained perfectly the painfully frustrating position WWE has put not just their female talent roster in, but the fans as well. Other than brief glimpses of brilliance (Chyna era, Trish/Lita/Victoria era, Beth Phoenix era, Stephanie vs. Brie feud), we haven't really had the opportunity to see women showcased prominently in WWE for the last 20 years and it's bullshit. I'm thankful for NXT. For my money, Sasha Banks is the best wrestler on the roster, other than maybe Sami Zayn.

I want to see Sasha Banks vs. Paige and Beck Lynch vs. Nicki, myself.

In NXT, only a few weeks before their "official" debut on the main roster, they both had an incredible, PPV-quality match. This is important, because immediately upon joining the main roster, Paige's work quality suddenly dropped like a rock, and Emma was given a BS storyline that never went anywhere, barely wrestled at all in, and never concluded.